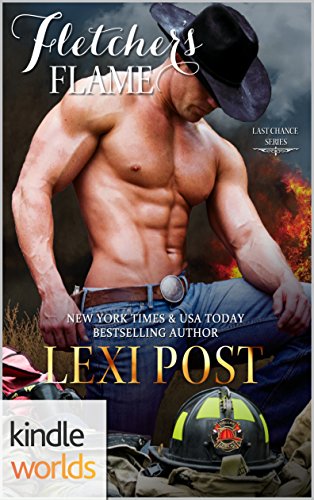 Fletcher's Flame by Lexi Post is a HOT read filled with lots of drama and steamy hot scenes. Ms. Post had me flipping pages just as quickly as I could to see what was going to happen next. Lexi Post is one of those authors that became a must read for me after my very first taste of her work


Dana Wilson is a sweet lady that loves animals. That moves her to the top of my list right there. She is also courage, smart, and independent.

Bo Fletcher is not only a soft hearted cowboy he's also a brave fireman. He's creative and very protective of those he cares about. His first encounter with Dana is in the middle of the flames. It starts out hot and just keeps getting hotter.

Dana and Bo throw off some pretty good sparks and those sparks turn into a flaming passion as their attraction grows.

Dana finds herself in many dangerous situation and Bo usually isn't too far behind and caught in the danger as well. I don't want to tell you too much. i will tell you there are times when I held my breathe waiting to see how they were going to get out danger. I read this book in one setting. There was NO way that I could put it down until the end. I was completely captivated from page one until the very end.

I really enjoyed Dana and Bo's story. The drama is intense, the attraction is flammable, the characters are great, and all those adorable pets are awe worthy. Lexi Post has done a fabulous job of bringing these to characters together in an intense situation that bonds them together quickly.

I was given the chance to read this marvelous story and it is my great pleasure to share my thoughts with you.

You may find more of my reviews on Lexi Post's work here.

Christmas with Angel Amazon Buy Link
Posted by Reviews By Crystal at 8:21 PM

Email ThisBlogThis!Share to TwitterShare to FacebookShare to Pinterest
Labels: @LexiPost