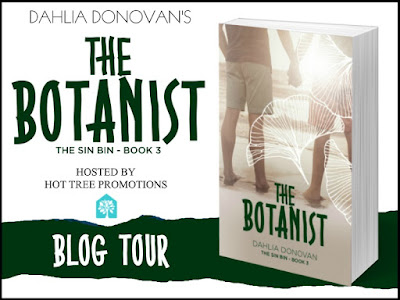 The Botanist
Series: The Sin Bin, Book 3
By Dahlia Donovan

When mistaken identity leads a young botanist into trouble, Navy SEALs come to the rescue.

Aled Demers prefers plants over people. He survives an attack in Anguilla alive but emotionally and physically scarred. Back home in Cardiff, he struggles with PTSD and his unraveling life.

Wyatt "Earp" Hardy lives for his SEAL brothers. Retiring from military service brings new challenges for him to face. The last thing he expects is for his next mission to involve falling for the much younger botanist.

If the botanist has the strength to heal, can Wyatt find the courage to love?

The short story The Botanist is book three in Dahlia Donovan's international bestselling gay romance series, The Sin Bin. Each one features hot rugby players and the men who steal their hearts.

BUY LINKS:
ONLY 99 CENTS
Amazon: http://amzn.to/2f9G3IL
All other links: books2read.com/botanist 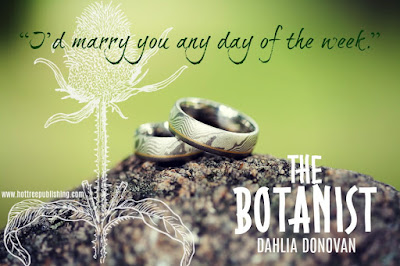 Excerpt:
“Are you serious about this leaving shit?” Trace sat across from him at one of their favourite bars in Coronado—McP’s Irish Pub. “I thought you’d be in until you hobbled out with no hair or teeth, clinging to your walking frame.”

“They pay you by the joke?” Wyatt flicked one of his onion rings across the table at him. “I’m done—nothing left for me to accomplish.”

Wyatt didn’t even blink in response. He waved the bartender over for another round of Guinness; Hamish had gotten all of the SEALs hooked on it. “What gay thing?”

“The fucked up policy that says you can’t serve if you’re open about who you are.” Trace pushed the plate of nachos to the side. “None of us give a shit who you fuck—or who you love.”

Wyatt knew the men under his command respected him, thought of him as a friend. SEAL teams were almost always tight-knit units. They only had each other to count on in the middle of treacherous missions. “None of you?”

Posted by Reviews By Crystal at 2:39 AM