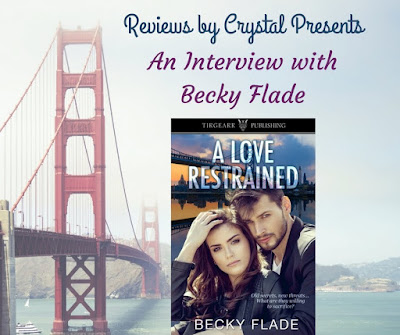 A Love Restrained
by Becky Flade

Interview with by Becky Flade:

Crystal: Today I have the pleasure of hosting by Becky Flade. Welcome Becky! I am so excited to have you here today. Would you share a little bit about yourself with us today?

Becky: Sure. I’m 41 years young and married with three daughters, one son-in-law and two grandsons. A Love Restrained is my 4th full length romance. I also have a number of published novellas and short stories.

Becky: The fourth, and likely, final book in my Fated series. Each book is stands alone but is written to complement one another, taking place in the fictional town of Trappers’ Cove, Minnesota, and featuring many of the same supporting characters. Fated Love, the one I’m currently working on, gives us the love story of the children of two couples from earlier books in the series. And to paraphrase Chuck from Supernatural season five: endings are hard.

Becky: My husband had been bugging me for years to write our love story. Now, our love story is pretty incredible, don’t get me wrong, but I don’t write non-fiction. For him, I wrote A Love Restrained – releasing October 4th from Tirgearr Publishing. I’d been toying with the basic premise for a while. Because of my husband, I set it here in our hometown, in our very neighborhood. And added little relatable moments my husband and only my husband would recognize (kind of like Easter eggs) so that he’ll always know this one is for him.

Crystal:  Do you have a favorite snack that you like to munch on while writing? If so would you mind sharing what it is with us?

He appeared about twelve feet in front and to the left of her position. He faced her, but the setting sun was in his eyes. He can’t see me. She wished the helmet didn’t shield his face from view. Bet he looks every inch the fierce warrior standing in the dying light, weapon in hand, the thrill of the hunt glinting in his eyes. She shook off the notion and took slow, deliberate aim.
She whistled. He raised his marker to chest height and squeezed off several shots. They were too high, hitting the tree with a series of thunks that rained bits of paint into her hair, and too late. From a crouch, she landed a game winning shot center mass with a burst of bright pink paint. She leaped from her hiding spot, shaking her paint-smeared bottom, and pumping her fists in an impromptu victory dance.
She heard the pop and swish of his marker firing a second before she felt the ping of the paintball burst against her rump.
“You can’t shoot me if you’re already dead.” She rubbed the spot. That’s going to leave a bruise. “I can’t believe you took a cheap shot at my ass. Spoil sport.”
“Involuntary muscle reflex caused by death throes couldn’t help it.”
“Liar.” She wrapped her arms around his waist and lifted her chin. “Kiss the winner, handsome.”

Becky: I love to read!

Becky: I love to have music playing when I write, usually something that matches not just my mood but the mood of the book and/or scene I’m working on. But a lot of times it ends up being the tv playing in the background. One of my favorites programs to write to, because of the tone, the rhythm of the dialogue, the melody of the background music, is Firefly. God Bless Joss Whedon

Becky: My upcoming release A Love Restrained is specially priced for Kindle at 99¢ until October 8th when the price returns to $4.99. And for a limited time, Crimson Romance is offering the first two books in my Fated series bundled together for 99¢. Thanks for having me today. It was fun!

About A Love Restrained:

Philadelphia police officer Kylee Parker is dedicated to protecting and serving. She sees the work in absolutes: right and wrong, black and white, good guys and bad guys. That is, until she chases a drug dealer into a dead-end alley and finds the bad boy she had a painful crush on throughout her teen years has turned into a more dangerous and more attractive man.
Jayson Donovan knows he doesn’t deserve someone as good as Kylee Parker. As the right hand man to a local drug-pushing mobster, he’s solidly on the wrong side of Kylee’s moral compass. But he can’t help reaching for her time and again when he knows he shouldn’t.
Even when his secrets threaten them both.

Spring in the city brought people out of winter hibernation like a siren song, but as the temperature rose, so in turn, did the crime rate. Cops had to be sharp as they walked the streets of Philadelphia. In her ten years on the force, on these streets, she’d seen a lot of crazy and often stupid criminals do a lot of crazy and often stupid things. But to be so brazen, or so plain dumb, as to do a hand-to-hand drug buy right in front of two uniformed officers rode high on her list of top ten.
“Tell me you saw that?”
“Saw what?” Hunks of half chewed soft pretzel fell from Sherman’s mouth.
Pete Sherman’s not a bad cop, just not an observant one whose paunch portrayed his love of all things fried and his reupholstered recliner. He hadn’t seen a thing in the last six months. But he took direction well, despite the fact he had seniority.

“There, across the street.” She pointed. “The junkie walking east just scored off the guy in the leather bomber heading west. I swear the dealer looked right at us before the exchange. Call it in, Pete, and grab the junkie. I’m going after the dealer.”
Sherman didn’t argue. She took off into a quick lope, kept her footsteps light so as to not alert the man she pursued. The spring day had drawn people out and the complaints of the pedestrians she weaved through grew loud. The guy glanced over his shoulder, and the edge of his mouth tipped into a grin before he sprinted around the corner.
“Cocky jerk.” She turned the corner, and shouted, “Stop! Police.”
She ran clean and fast, closing the distance between them with little effort. The dealer ducked into an alley she knew to be a dead end. She slowed and put one hand on the butt of her service pistol as she approached. He had his back to her, his hands on his hips as he stared at the brick wall in front of him.
“Philly PD, you’re under arrest. Slowly put your hands above your head and against the wall to your left.” She closed the few feet between them, using her free hand to release the handcuffs from her belt, the other remaining on her weapon. She cuffed him, with practiced efficiency, and then read him his rights before leading him out of the alley, preferring to do the pat down with her partner present.
“Kylee Parker, I’ll admit I daydreamed a time or two about you cuffing me, but it was never in this context.” 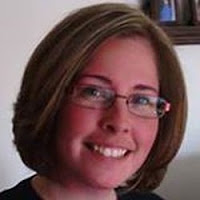 Becky has been writing stories since kindergarten. But it wasn’t until she found her very own knight in slightly tarnished armor that she took the leap in to publishing. And hasn’t looked back once. In addition to being a wife, mother and grandmother, she works as a legal professional when she’s not writing, reading or dancing. And Becky’s proud to tell people she’s making her own dreams come true one happily ever after at a time.
AUTHOR WEBSITE http://www.beckyfladeauthor.com
AUTHOR BLOG http://www.beckyfladeauthor.com
AUTHOR SOCIAL MEDIA SITES
https://www.facebook.com/BeckyFlade
https://twitter.com/beckyflade
http://www.amazon.com/Becky-Flade/
http://www.goodreads.com/Becky_Flade
Posted by Reviews By Crystal at 2:25 AM