#GiveAway #ReleaseDay ~ THE LADY IN RED by Kelly Bowen ~ @kellybowen09

A lady with secrets, a man with a burning desire, a love that breaks all the rules

Lady Charlotte Beaumont has spent her whole life being ignored. By her parents, her brother, even the servants. So she was secretly able to develop her talent for painting well beyond the usual watercolors. Too bad no one will let her actually use it-women are rarely accepted into the Royal Academy. But when a connection at the Haverhall School for Young Ladies gets Charlotte her dream commission, she'll do whatever it takes to make it work. Including disguising herself as "Charlie."

Flynn Rutledge has something to prove. His lowly upbringing is not going to stop him from achieving his artistic dreams. This commission is the key to his future, and his partner, an unknown youth in oversized clothes who is barely old enough to shave, doesn't exactly inspire confidence. But Charlie does inspire Flynn's artistic passion-something he worried he might have lost forever. For all his street smarts, nothing can prepare Flynn for the shock of Charlie's true identity. He doesn't care that she's a woman, but a lady of the ton is a different matter altogether . . . 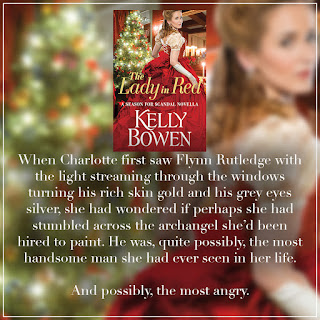 Kelly Bowen grew up in Manitoba, Canada. She attended the University of Manitoba and earned a Master of Science degree in veterinary physiology and endocrinology. But it was Kelly's infatuation with history and a weakness for a good love story that led her down the path of historical romance.  When she is not writing, she seizes every opportunity to explore ruins and battlefields. Currently, Kelly lives in Winnipeg with her husband and two boys, all of whom are wonderfully patient with the writing process.  Except, that is, when they need a goalie for street hockey.

Giveaway: Enter to win 1 of 15 free ebook downloads of The Lady in Red!