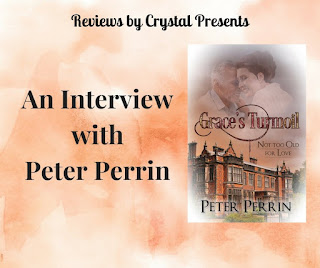 Crystal: Today I have the pleasure of hosting  Peter Perrin. Welcome, Peter! I am so excited to have you here today. Would you share a little bit about yourself with us today?

Peter: Well, let's see. I've been married to my second wife for almost forty years, and she is my soul mate.

Peter: I haven't mastered the art of multitasking so there's no real next piece of work yet. But I have found myself scribbling scaps of scenes and bits of dialogue for book two into a notebook as they occur to me. I even have tiny bits of up to another four books after 'Not Too Old for Love: Grace's Turmoil'.

Peter: I wanted to show that people over forty (or in my book 'over sixty') aren't sitting with their feet up, just waiting to die. They can still have romance and relationships in their lives. Some of the spirit of the characters is drawn from members of my local Community Centre, and its members will certainly recognize the centre in one scene.

Peter: Oh, that would definitely be dark chocolate. Great anti-ageing apparently, plus good for creativity, and tastes amazing.

Peter: I have several, but then I'm biased. But there is one that my Critique Partner loved that involves the hero and a man-hungry (but married) woman he is introduced to in the local Royal British Legion club. (I guess the USA equivalent would be a veterans club).

Peter: Despite being seventy-three I'm still a kid at heart and I play games on my PlayStation 4, and have just gone back to playing 'World of Warcraft' online on my laptop after a few years off. Oh and I fish for Carp and recently caught a lifetime best fish of 26 pounds (about 12 kilos I think).

Peter: When writing or thinking about the book the only sound I want to hear is the sound of silence. Any noise at all throws me completely.

Peter: Just that it seems the average age of romance readers is between thirty and forty, yet the average heroine in those books is in her early twenties. It seems more mature readers of romance novels are asking for heroines they can identify with, and that’s what I’ve tried to give them. Long live Seasoned Romance.

Divorced and emotionally damaged, artist Grace Stollery wants nothing more than to spend her semi-retirement painting and let time heal her emotional scars.

But when dashing widower Alfred Nobel moves into her retirement village he turns her life upside down and her heart inside out by awakening feelings she wants to keep dormant.

Alfred quickly sets out to woo Grace and slowly she warms to him. But the village’s resident femme fatale wants him for herself. Will she succeed in driving a wedge between Alfred and Grace?


Excerpt: Grace’s Turmoil
Not Too Old for Love
Book 1

Grace jabbed at the volume button on the remote control, turning up the sound on the television. She was trying to drown out the chatter which filled the palatial residents’ lounge. It had been like that for days, and she’d grown tired of it. Who would have thought the imminent arrival of one man could affect mature ladies like that?
One of the things which had appealed to her when she moved to The Grange retirement village was the lack of men. Yet a man who aroused feelings in her she didn’t want was going to add to their number.
Grace had caught a glimpse of him across The Lounge a few months ago, taking the standard tour of The Grange. He'd towered over the young woman he’d been with, and she’d guessed he was at least six-foot-five. Built like a tank, with a mass of wavy white hair and a snow-white beard, he’d reminded her of a polar bear. His presence had been overpowering and almost menacing. An image of him defending a seventeenth century mansion in days gone by had jumped into her mind.
Looking at him had sent a spontaneous burst of attraction rippling through her. It had caught her by surprise. Becoming attracted to anybody was the last thing she’d needed right then. Her divorce had been too recent and too painful. All she wanted was to focus on her painting to block out the pain. Although she hadn’t come there to look for a man, there was no denying how she’d reacted to the sight of him. She wondered how she would cope when they met. And she couldn’t help feeling he was going to have quite an impact on her life. Whether it would be a good impact or not was the million-dollar question. He might be the greatest thing since sliced bread! Or he could turn out to be a snake in the grass like her ex-husband.

Peter Perrin writes sweet, seasoned romances involving larger-than-life mature characters who will make you rethink your views on older people in a positive way. His characters are mature in age but not necessarily in their behaviour. They may not be in the first flush of youth but that doesn’t stop some of them acting like hormonal teenagers.
Peter was born in Romford, in the county of Essex, near London, England. For nearly twenty years he has lived with his wife of almost forty years in a quiet suburb of Swindon, in the county of Wiltshire, in England. He is a father and grandfather.
He is a former member of The Royal Air Force who has served in the UK, and in Madagascar, Singapore, and Saudi Arabia. He was also stationed for two years in Aden—which nowadays is part of Yemen.
After almost fifteen-years’ service in The Royal Air Force Peter worked in Engineering, Quality Control, and Procurement Management, not to mention myriad smaller jobs in between those careers.
Now retired Peter’s interests are Writing, Carp Fishing, and (despite being in his early seventies) PC and PlayStation games.
His favourite quote is “Youth passes, but with luck, immaturity can last a lifetime.”