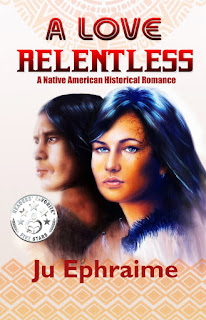 Elizabeth Johansen lives her life by a specific code of values. She has worked hard to obtain everything she owns, and she wants nothing from anyone. But now, she faces a dilemma when an unexpected inheritance from her Great-aunt Edna forces her to reexamine her values and embrace the culture she has long since forsaken.

Rohan is the son of an Athabaskan chief. At twenty-six, he is more focused on amassing his fortune and preserving the land of his ancestors. So, when he learns the large parcel of acreage adjourning his property has been left to a woman who has no interest in preserving their customs, he sets out to convince her to sell.

But Rohan finds the independent beauty irresistible and sets out to win her. Elizabeth, proud and self-sufficient, soon discovers that the man of her dreams is part of the culture she abandoned. Can they each find a way to meet the other halfway between his life and hers?

Amazon Pre-Order Link
~*~*~*~*~
Excerpt:
Rohan was stunned by the feeling kissing Liz evoked in him and the knowledge that he wanted to do more than kiss her. All he could think of was how much he desired her. He was nearly mad with the need to taste her, to touch her, to press her full length against him. Let her feel his reaction to her. He forced himself to lean away from her to gain some semblance of control over his lust-filled body. He was unsure if she would be receptive to the things he wanted to do with her. He imagined himself sinking into her, burying deep; even then he didn’t think the hunger he was feeling would be assuaged. He could feel the tremor in his hands as he tried to move her away from him. She wasn’t having it. So he said, “Heavens, you taste wonderful,” and drove back into her sweet mouth. He used his tongue to do to her mouth what he wanted to do to her body, and by the spirits, she was mimicking him with her tongue. She had no idea how flimsy his control was. It was threatening to snap any minute.
He felt a terrible ache around his heart, squeezing and clenching, until he was on fire with his need to take her there and then. He was intoxicated by the feel of her, the smell of her—outdoors, wind and sun—by the line of her spine as she pressed into him. The sensations came too hard and too fast, and he froze in sudden paralysis as he felt his member stiffen even further, pulsing as if it were going to escape the confinement of his pants. He had to stop … NOW.
Cautiously, he touched her back and slid his palm to her waist, expecting her to call a halt any minute. His hand shook as he gently grasped the nape of her neck to give him the leverage he wanted to fully cover her mouth with his. Spirit, she was exquisite, willingly responding to his savage demand, her mouth too luscious to be real. This wasn’t happening. His breath was rushing in and out of his lungs in hard bursts like a prizefighter in a ring. He was struggling to keep his movements gentle while his fiercely aroused body was demanding that he let loose.
He increased the pressure of the kiss, touching his tongue to hers in the mating dance. As his tongue made repeated contact with hers, he felt her hesitate slightly at the unfamiliar intimacy. He knew it was wrong to kiss her that way, when she was evidently untried, possibly a virgin, but he couldn’t help it. He couldn’t get enough of the taste of her. It was intoxicating. He made a soothing sound deep within his throat, and he licked deeper, searching the sweet, dark heat of her mouth. To his astonishment, she moaned and relaxed in his arms, her lips parting further, her tongue dueling hotly with his.
Rohan had not expected her to be so ardent, so receptive. She should have pushed him away, but she yielded herself. Her willingness galvanized him to take further liberties. He couldn’t stop his hands from wandering over her hungrily, reaching over the curves of her buttocks to hitch her higher against his body. He lifted her slightly, nestling her into the huge ridge of his sex until she fitted exactly the way he wanted.
The thin layers of their clothing did nothing to dampen the sensational feel of her body rubbing against his heated flesh. She gasped into his mouth, and he delved in deeper, with her practically swinging from his neck.
“Liz,” he said hoarsely, his mouth stealing down the tender line of her throat, “you’re driving me insane. We have to stop now while I’m still able to.”
“No. No.” Her breathing was hot and rapid as she pressed into him, rubbing against the rock-hard projection of his loins. He couldn’t resist kissing her again before he reluctantly took a step away from her. She stood there, her head tilted back, looking as aroused as he felt, but he had to stop. He gave her a chaste kiss on the lips before moving away.
“I wanted to do this the first time I saw you,” he told her huskily. “I felt the attraction between us, and I fought it with everything I had, but it was too powerful for me to control. Like the wild wolves that roam our land, it would not be contained. It felt as if there was something alive between us.”
Seeing her standing there watching him, still lost for words, he couldn’t help himself from reaching for her again. He wrapped his arm around her waist and kissed her with all the love he was feeling, his body painful and heavy with lust.
“I’d better get going,” he said, running his hand through his disheveled hair.
“Yes. You’d better,” was all she said.
It was evident they were both too aroused to remain in the same space without reaching for each other. Even now, he had to fight to keep his hands at his sides.
“Good night, Liz. I’ll see you tomorrow.”
“Yes. See you tomorrow,” she told him.
* * * *
After he left, Liz stood there hugging her body as she watched him walk out the door. She had never slid the wooden blot on the door at home before; tonight she needed that added security, especially after her disturbing dreams.

Ju Ephraime writes steamy high heat romances, packed with emotions and strong alpha characters and always a wonderful, happy ever after. She has won several awards for her writing, and had even seconded in Amazon Breakthrough Novel Contest, with her White Magic Woman. When not writing romance novels, Ju could be found writing children’s books, which includes her, Too-Clever series, a collection of ten children stories. Ju writes her children's stories under, Dr. Julia E. Antoine. These days she stays busy helping in the community and donating her services to a not-for-profit organization, which she helped establish. Presently, she resides in CT where she has lived with her family for the past thirty years. She still misses her time on the sunny Caribbean islands, but takes pleasure in using them as backdrops to some of her stories.

Visit her blog at http://www.juephraime.blogspot.com or her personal page at, http://www.juliaeantoine.com where you can sign up for e-mail updates and other goodies.
Posted by Reviews By Crystal at 2:55 AM