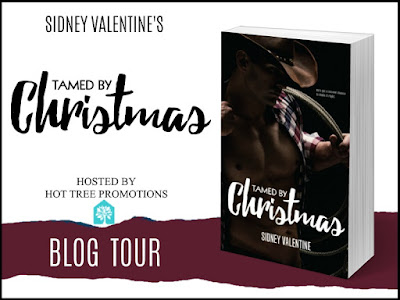 Tamed by Christmas
By Sidney Valentine

When Paris loses her job days before Christmas, her world crumbles. She returns to her parents’ home in outback Australia where she plans on eating enough food to fall into a coma and sleep straight until New Year’s. But when she unwittingly bumps into her ex on her way home, old feelings awaken.

When they find themselves stranded during an unprecedented storm, they’re faced with explosive emotions, secrets, and uncontrollable desires. Will Jett gamble on a second chance before Paris leaves him for good this time? 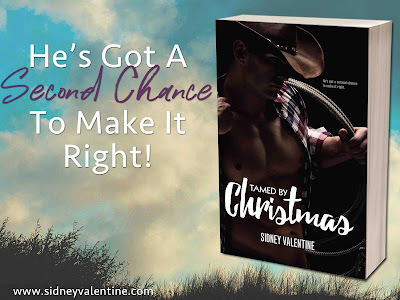 She spun, with bag in hand, and hoofed it down the room, dodging people left and right. She had to get away from him and fast.

Oh geez, because clearly the curse hadn’t finished with her, now it threw Jett in her face? What next? He’d invite her to his wedding and announce his wife-to-be was pregnant with twins. God, she shouldn’t care, but that might kill her. She had no boyfriend to gloat about, no job, and was returning to her parents’ place to hide from the world. Yep, her armoury was empty to battle against Jett. But it was more than just gloating or acting as if she was better than him. He was her first boyfriend, her first lover, her first true love. And she accepted long ago that he would always have a piece of her heart, but she sure as hell didn’t want him flaunting his awesome life in front of her. Bad enough everyone in Yalgoo would ask her a million questions, but Jett was a problem on a whole different plane of existence. She planned to stay in her parents’ house the whole visit to avoid bumping into him in town.

Footfalls closed in, and she glanced behind her to find him marching after her with determination, his brows pinched. With a huff, she stopped and whirled to face him. “What do you want?”

“Where are you off to in such a rush? Last time I saw you run this fast was when Ned’s bull escaped the yard and chased you down the street.” Those crystal eyes, crowned with thick brows, could have melted her on the spot, but she wouldn’t let him affect her. He’d done enough of that to last a lifetime.

“If I remember right, it was you who released the animal.”

He laughed, the sound a feather across her skin. How dare he make her feel good in his company? After what he did, he didn’t deserve a second of her time. “Well, it was great to reminisce with you,” she said. “I’ve got to go.”

“And where are you going exactly?”

Paris stormed off and responded without turning around. “Looking for my lift.”

Wait! What? She stopped dead in her tracks and turned around, meeting his devilish grin. Oh, great. Thank you, universe, for topping my wonderful Christmas homecoming.

ALSO BY THIS AUTHOR:

Posted by Reviews By Crystal at 1:55 AM