#SpotLight ~ Possess Me Under The Mistletoe By T.F. Walsh ~ @tfwalsh 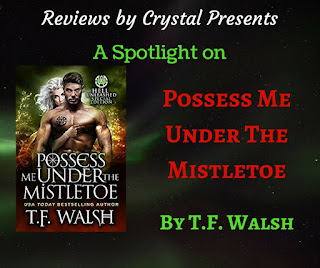 Possess Me Under The Mistletoe
Hell Unleashed
By T.F. Walsh
Blurb:

She's innocent, wicked with magic, and off limits... Just his type.

It's Christmas Eve and Cyra Mane's landed her first solo mission to cleanse a haunted house. Easy. After all, she's keen to make a good impression with the demon hunting company that hired her. But when Gunn, a seasoned hunter she's desired for months, shows up, the seemingly simple cleansing task turns dangerous. And why's he there when he's ignored her for months?

Gunn's kept his distance for a dark reason that's followed him for years. And he sure as hell doesn't intend to drag sweet Cyra into his mess, even if he can't stop fantasizing about her. Besides, he's there as a favor to her brother.

But when Cyra's spell goes horribly wrong, not only are they imprisoned in the house, but they discover a portal to Hell in the attic. Can Cyra keep her mind off the brooding hunter and on protecting the elderly home owners before the demon hunting them turns them into Christmas dinner?

~*~*~*~*~*~*~
Excerpt:
Her mind kept pestering her, telling her to return downstairs, as if she’d forgotten something. And that Gunn wasn’t the guy for her, but she had to be wrong. How could he not be when he stared at her as if he owned her? And she desired a guy who looked at her that way. A man who’d die before leaving her.

With her hands in his hair, she clenched them tighter. “Gunn, be my first. My only.”

His breaths quickened and yet hesitation crowded his eyes.

“I’ve never felt this way,” she continued. “For months, I waited for you to make a move. I even fantasized about you when I masturbated.” She reached down and popped open the buttons on her pants. With the back of her knuckles, she stroked his thickness, pressing against his jeans.“Oh, baby, are you sure you want to do this?”

“Please. Don’t make me beg.” Except she’d do it with no shame. Not when she’d been waiting for Gunn to stare at her with such sexiness, she’d implode.

He ran a hand across his chin, his palm scraping his short facial growth. “If you were mine, I’d give you anything you ask for.”

She drew in a hitched breath, and her response came out a whisper. “Then make me yours.”

She was crazy about Gunn, from his strength to the way he softened around her, and even to his fingers worming their way up her shirt. She gathered his top into her fists and wrenched him forward. Their mouths clashed, and she inhaled his breath, kissed him with the boldness she’d held on to for too long.

His fingers hooked into her pants and underwear, and he wriggled them down her legs. Breaking their bond, he ripped them off her feet, her body jerking from the force. 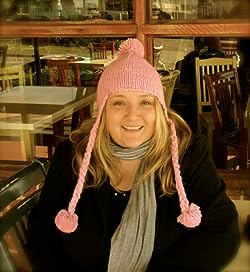 USA Today Bestselling Author, TF Walsh emigrated from Romania to Australia at the age of eight and now lives in a regional city south of Sydney with her husband. Growing up hearing dark fairytales, she's always had a passion for reading and writing horror, paranormal romance, urban fantasy and young adult stories. She balances all the dark with light fluffy stuff like baking and traveling.