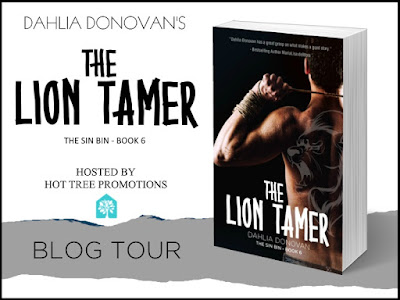 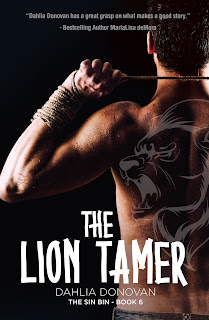 The Sin Bin will never be the same.

Gray Baird’s to-do list for the year includes starting a restaurant, claiming his submissive, and keeping his nosy friends out of his business. He has his work seriously cut out for him.

Scottie Monk prides himself on bullying his way through problems—and sometimes even people. His life is spiralling out of his control, but he refuses to break. The last thing he expects is to find peace in the confines of submission.

One man will try to tame a lion.

One man will try to heal.

And both men will have to join forces to deal with a toxic family and invasive paparazzi.

The Lion Tamer is book six in Dahlia Donovan's international bestselling gay romance series, The Sin Bin. Each one features hot rugby players and the men who steal their hearts.

It is recommended that readers have read at least The Royal Marine and The Unexpected Santa prior to reading The Lion Tamer. 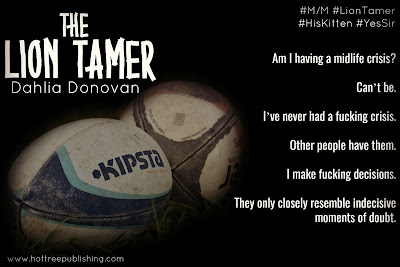 Wanting to impress his new backers, Gray got to work preparing a truly impressive spread with boeuf bourguignon toast, prime rib sliders, and whisky-glazed wings for starters, and a brown butter roast chicken with smashed potatoes for the entrée. Akash had brought over a selection of cakes; he’d be providing desserts for the restaurant for the foreseeable future. There were also potential future menus on paper to show the owners.
Fuck me.
This felt like more work than boot camp—it isn’t, but it sure as fuck feels like it.
“Oi. Gray? You in here?” Caddock barged into the kitchen. “We’re all seated out there. Scottie’s late—as ever. You ready to feed the ravenous horde?”
“You’ve got to stop reading Francis’s novels. Scottie’s only late because he decided to try to drink us all under the table again. He’s probably still sleeping it off.” BC strode in behind his friend. They both started towards the platters lined across one of the counters, only to freeze in place when Gray scowled at them. “Bugger. You ever consider refereeing? You’ve got the ‘punish the naughty rugby boys’ look down perfectly.”
Punish the naughty boys?
They’ve no fucking clue.
If they only knew….
Deciding not to go for the easy joke, Gray closed the two former rugby players out of his kitchen. He didn’t want them to get an early sampling of the food. His reputation preceded him, and they went without an argument.
When the server borrowed from the nightclub arrived to help him, Gray managed to get all the starters plated up without any trouble. He followed the waiter out into the restaurant to find the five rugby players waiting, seated around one of the larger tables. A slightly bleary-eyed Scottie took one look at him, muttered a few creative curses, smacked a laughing Caddock on the head, and bolted from the dining room.
“Well, he handled that as brilliantly as expected,” Remi, the lone Frenchman amongst the group of friends, remarked caustically. “Should someone retrieve him? I’m not in the mood to cater to the Monk temper today.”
“Bloody Frenchie,” BC muttered. “I am not sodding it.”
“Me either,” Caddock chimed in readily.
Gray exchanged a knowing look with Taine, who was the only serious one amongst the five, perhaps outside of Remi. “I’ll hunt the rabbit.”
“He’s sodding terrifying,” BC whispered to Caddock, eyes darting toward their new chef. Gray chuckled darkly. “Are we sure he wasn’t an assassin?”
“Just a marine.”
“They’re never just marines.” Remi met Gray’s stony gaze without flinching. “I doubt assassin is the right word for a decorated marine sniper and sergeant major.”
Interesting.
It sounded as if Remi had done a bit of research on him. Background check, maybe? It wouldn’t have been all that difficult to find a bit about his service history. The vast majority of his deployments before and after becoming a drill instructor were likely declassified.
With a nod to Remi, Gray made his way out of the restaurant. He blinked in the rare spring sunlight. His eyes quickly adjusted to allow him to spot Scottie, leaning against a nearby wall and muttering to himself.
“You’ve been avoiding me.” Gray walked purposefully forward until the toes of his shoes almost touched the edge of Scottie’s trainers. “Did I scare you?”
“Hardly.” Scottie tilted his head to scowl at him. “Fuck off. My head’s still killing me.”
"What do they call you rugby boys? Lions? Is that it? You're no fucking lion. You're a kitten who's barely off his mother's milk." Gray easily dodged the clumsy punch thrown his direction. Even without his thirty-plus years of military experience, avoiding the swing of a drunken man required little effort. “C’mon, kitten. Didn’t your mom tell you not to roll around in the dirt?”
“She called me her little fucking bastard and told me to drink bleach.” Scottie jerked his shoulders up in a hard shrug. “Didn’t learn much from the twat or anyone else in my family, come to think of it.”
“So? Want a medal?” Gray used his forearm to pin Scottie to the brick wall behind him. “Want a fucking trophy for surviving? Guess what? They don’t hand them out. I should know. I’d be first in line to receive one. You don’t get a pass from common courtesy because life hasn’t been fair. You’re not the only human being to survive a childhood of abuse and pain. Get the fuck over yourself.”
“I’m not a fucking kitten.” Scottie tried to shove him away, but Gray held him still. “What the fuck do you want?”
“Well, you’re certainly not a lion.” Gray bent forward to drag his nose along the side of Scottie’s neck, biting him just above his collar. “No, not a lion. You also still reek of booze. Forget to shower this morning?”
“Fuck you.”

Gray couldn’t resist a smirk when the evidence of Scottie’s arousal pressed against his leg. “Get back inside for the tasting, kitten. We’ll finish this later.”

Other Books in The Sin Bin Series
The Wanderer
Book 1

Website | Facebook | Twitter | Goodreads | Amazon
Dahlia Donovan wrote her first romance series after a crazy dream about shifters and damsels in distress. She prefers irreverent humour and unconventional characters. An autistic and occasional hermit, her life wouldn’t be complete without her husband and her massive collection of books and video games.

Posted by Reviews By Crystal at 5:35 AM