#NewRelease ~ Eye on the Ball by Francine Beaton ~ @RoanePublishing 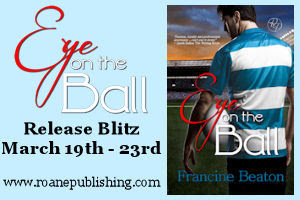 Eye on the Ball
Playing for Glory #1
by Francine Beaton

What would prove stronger? Love or Loyalty?
Top professional rugby player Jakes du Plessis desperately wants to keep his team's vow of celibacy in order to win the new International Rugby Club Competition, but he didn’t count on meeting ethereal artist Angie Summers.  Even a promise to his friends and teammates, demons from his past, and a distance of more than 9000 miles, could not stop Jakes from falling in love with Ange.  In the end, it took teamwork, perseverance and a whole lot of grovelling from Jakes’ side for them to overcome these obstacles, and find their Happily Ever After.

She took the envelope from uncle Bob in silence. She would not grovel for this job. She had to make another plan. She grimaced, “I guess you want me to leave now?” she asked.

Ange didn’t reply. She turned around to walk to the room next to the kitchen where she stored her jacket and bag. On the way to the door, she picked up a pitcher with ice water and walked towards the table where Jakes now sat with her brother, her fiancé, and a couple of their teammates.

Ange did not even glance at her brother or Chris when she stopped next to their table. She heard Jesse’s voice when he asked the others if they wanted more beer, and they all turned to her expectantly. Even Jakes lifted his head to look at her. Did he look guilty, or embarrassed, Ange wondered. Well, it didn’t matter anymore. He got what he wanted, she guessed.

His voice was gentle when he asked for another beer, so much different from his angry tone of voice when he spoke to her every other time. Her mouth almost dropped open, but he was not going to fool her. Her face was set when she spoke.

“You can fetch your own beer.”

She saw his frown and confused face, but she did not care. He caused her to lose her job and her only way to help Clara. She glared at him again, “I’ve got something else for you.”

Ange lifted the jug and poured the ice-cold water over his head. She heard his sudden indrawn breath, and her brother and his friends’ shocked protests, but she didn’t wait. She turned around and walked out of the clubhouse, suddenly calm. She was aware the place was quiet, apart from the South African’s soft muttering. She heard her brother’s voice, but she did not care. She felt so much better for it.

While she walked back to her car, Ange realized it was not fair to Jakes. Maybe she should have saved some of the water for Chris. He might need it to cool down in a place where he needed it most.

When Jakes managed to cool down…, no not cool down. That ice water cooled him enough…but when he felt calm again, he’d had more than enough for one night. He did not know what he’d done to make the woman so angry, but he didn’t care anymore. She’d caused him enough damage already.

“What did you do to my sister to make her so angry?” Jesse asked him.

Jakes stared uncomprehendingly at Jesse, and shook his head, “Your sister?” he asked, confused.

“Ange?” Jesse asked patiently. “The one who poured a jug of water over your head?”

Jakes stared at Jesse. “She’s your sister?” He was shocked. Jakes noticed Jesse’s nod, then he sighed, “Hell, I hadn’t done anything. I should be angry. She was the one who damaged my leg again last week. The first time I saw her she spilled water on me. Why she’s angry, I don’t know.”

The other men at the table glanced at each other. To Jakes’ surprise, they burst out laughing.

“What the hell?” he exclaimed, standing up. “I can’t see what’s so funny,” he grunted while he threw money on the table. “Just keep your sister away from me,” he said to Jesse before he stalked away as fast as he could. This was becoming a total frustration, he thought, while he walked the couple of blocks to the apartment.

It was freezing cold, he was away from home, and somehow he’d managed to get on the wrong side of the most beautiful woman he had ever seen. The fact she was apparently engaged to the biggest asshole on the team should have given Jakes enough signals to make sure he stayed away. Without making too much noise, he let himself into the apartment he shared with Michael, with the realization that his own pep talk did not help. He still thought she was beautiful that she had a fiancé was enough warning for Jakes to stay away. That reason, together with the rest of the list why he should not even think about her, was as long as his forearm.

Born and brought up in Pretoria, South Africa, Francine had no choice but to fall in love with rugby at a young age. With three older, rugby-playing brothers and a father who was a fanatic supporter of the local team and the Springboks, Francine adopted the motto, If you can’t beat them, join them. After trying to play one game, Francine gave up the idea to play rugby. She opted to watch the boys from the side.

At the tender age of ten, she discovered the romance section in the local library and that was it. She was a fan. By fourteen, she had read all the ones in the Afrikaans section and switched to the English section. There was a time when Francine briefly abandoned her favourite genre to lose herself in crime novels, but as they say: you never forget your first love.

Rugby, romance and writing is not all that keep Francine busy. If she does not spent time with her Scottish husband and teenage daughter either at home or travelling, Francine loves to read, or dabbles in photography and painting.

She is a member of the Romance Writers Association of South Africa (ROSA).