To Break a Warrior King's Curse By Kryssie Fortune 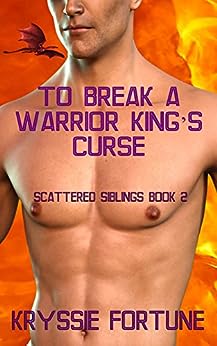 To Break a Warrior King's Curse

BLURB:
Leonidas can fight anything except dark magic.He inherited his father’s curse along with the Fae throne. Thanks to a rogue witch, if he doesn’t bed a different woman every month, he’ll turn feral. A man can only stand so much meaningless sex. No wonder he hates witches.When he meets Meena, he intends to seduce her, not love her.Meena’s a witch who never developed any powers. Banished to the mundane world, she masquerades as human. When she accidentally bonds with an escaped war dragon, Leonidas comes to reclaim it. His enemies strip him of his powers, and his month’s almost up.What happens when he discovers she’s a witch? And how will this warrior king cope when his curse kicks in and forces him into another woman’s bed.PLEASE NOTE This book was previously sold with the title CURSE OF THE FAE KING.

Amazon Buy Link
Posted by Reviews By Crystal at 8:08 PM