Welcome to Moonlight Harbor is a great start to another fabulous series from Sheila Roberts. I loved the town and the characters. I can't wait to revisit again soon.

Jenna Jones is a strong independent woman that is going through a massive life change. She's divorcing her lazy cheating husband, is in need of a new career, and has a teenage daughter, Sabrina that is having trouble adjusting to all the changes. Jenna is one those characters that I instantly found a connection with. I cheered her successes and shed a few tears with her when things did not go as planned.

Aunt Edie is one of those really sweet aunts that you just can't help but love. She's well-liked by the whole town. They are all so glad to see Jenna has come along to help her out. Edie has had her hands full for a while and The Driftwood Inn is in need of some serious repairs, a huge amount of money invested in those repairs and some tending loving care. The big problem is finding all the money that it needs to return to its former glory.

Seth Water is a new guy in town. He needs a place to stay while he gets settled in. He just might be exactly what The Driftwood Inn and Jenna are looking for. Seth has a complicated past that he isn't in a hurry to share with Jenna. He's a good guy and a hard worker. He offers to help out around the hotel until Jenna is able to get more done and a few more paying customers.

Overall I really enjoyed Welcome to Moonlight Harbor. The characters are easy to become friends with, the setting is so easy to envision, and the storyline contained the perfect mix of dramatic moments, heartwarming moments, laughter, tears, family, friends, and romance. All the ingredients that make up a great read. I enjoyed my first visit to Moonlight Harbor and I am very excited to see what Ms. Roberts has in store for my next visit.

I was given the opportunity to read this great book and it has been my pleasure to share my thoughts with you.

Once-happily married Jenna Jones is about to turn forty, and this year for her birthday – lucky her – she’s getting a divorce. She’s barely able to support herself and her teenage daughter, but now her deadbeat artist ex is hitting her up for spousal support…and then spending it on his “other” woman.

Still, Jenna is determined to follow her mother’s philosophy – every storm brings a rainbow. And when she gets a very unexpected gift from her great Aunt Edie, things seem to be taking a turn for the better. Aging aunt Edie is finding it difficult to keep up her business running The Driftwood Inn, so she invites Jenna to come live with her and run the place. It looks like Jenna’s financial problems are solved!

Or not. The town is a little more run-down than Jenna remembered, but that’s nothing compared to the ramshackle state of The Driftwood Inn. Aunt Edie is confident they can return it to its former glory, though Jenna feels like she’s jumped from the proverbial frying pan into the beach fire.

But who knows? With the help of her new friends and a couple of handsome citizens, perhaps that rainbow is on the horizon after all. Because, no matter what, life is always good at the beach. 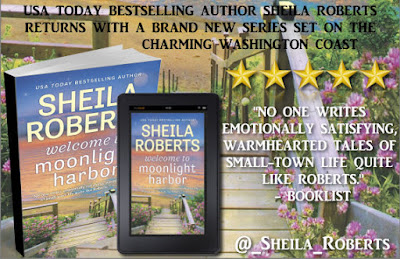 Excerpt:
1
To Do:
Clean office
Dentist at noon
Drop Sabrina off at Mom’s
Meet everyone at Casa Roja at 6
Or just tell them I’ve got bubonic plague and cancel 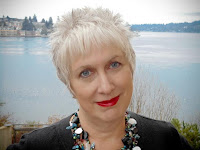 Sheila Roberts lives on the water in the Pacific Northwest. Her books have been printed in several different languages and have been chosen for book clubs such as Doubleday as well as for Readers Digest Condensed books. Her best-selling novel ON STRIKE FOR CHRISTMAS was made into a movie and appeared on the Lifetime Movie Network, and her novel THE NINE LIVES OF CHRISTMAS was made into a movie for the Hallmark Channel.

When she's not making public appearances or playing with her friends, she can be found writing about those things near and dear to women's hearts: family, friends, and chocolate.

Visit us at Pump Up Your Book!


Thank you for hosting!


Posted by Reviews By Crystal at 1:13 AM