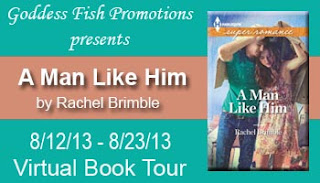 Rachel will be awarding a $25 Amazon GC to a randomly drawn commenter during the tour. So be sure to leave a comment below along with your email address so you may be contacted if you are the lucky winner. To increase your chances of winning visit the other stops on the tour. You may find the other tour stops here...  http://goddessfishpromotions.blogspot.com/2013/06/virtual-book-tour-man-like-him-by.html
~~~~~~~~~~~~~~~~~~
Interview:

Crystal: Today as part of the Goddess Fish Virtual Book tour, I have the opportunity to interview Rachel Brimble. Do you have a favorite scene you would like to share with us?

Rachel: I’m not sure what it says about me as a writer or a human being, but the love scenes! I adore writing them and reading them. In A Man Like Him, the first time Angela and Chris make love it’s a moment of absolute surrender for Angela. Her past has prevented her from putting herself in a position of vulnerability so when she gives herself to Chris, she gives herself fully. This scene just wrote itself. Love it!

Crystal: Where did you come up with the idea for A Man Like Him?

Rachel: The book was inspired by the real life event of my family and me being trapped in a caravan park during the 2010 French floods. We were rescued from a clubhouse roof after being stranded in the rain, wind followed sweltering heat, for thirteen hours. It was terrifying. Of course, it wasn’t long before I was pondering how the experience could be used in a book…

Rachel: Book four in my Harlequin ongoing series – this will a Christmas 2014 book and features a brand new hero and heroine, but lots of recurring characters from books one to three, including some from A Man Like Him. Writing a series is scary but SO satisfying. I’m absolutely loving it!

Rachel: Each new book starts with either a setting, a premise or maybe even a particular actor or actress. I am a very visual writer and before I can start my characterization, I need to browse the internet “looking” for my main characters. I always know when I have just the right actor/actress/model or unknown. They leap off the screen I know I have my new character. After that, I write characters sketches and then a two-three page synopsis. Occasionally, a chapter plan comes into play but that happens less as less often as a morph from plotter to pantser.
First draft is discovery and, more often than not, a bit of mess – the hard part comes in the following drafts!

Rachel: I’m not much of a researcher to be honest – my books are firmly ground in emotion rather than real events or the ins and outs of occupation or a specialized thing of any sort. Emotion is universal and unchanged, so whether I’m writing contemporary for Harlequin or Victorian romance for Kensington, I usually have all I need in my head and heart.


Rachel: So many! My favorites are Nora Roberts, Jill Shalvis and Robyn Carr – these are the authors who inspire and influence me the most. For Victorian romance, I love British author, Jean Fullerton, who has also become a very good friend of mine, which is fantastic :)


Crystal:  Is there any genre you haven't written that you would like to try?

Rachel: I can definitely see myself writing bigger books as time goes on – I currently write 85,000-90,000 words but would like to try my hand at a gritter romantic suspense or a very emotional/moral dilemma type of women’s fiction novel. Watch this space!

After two years in hiding, Angela Taylor knows her independence is worth it. As long as she can escape her past, she has everything under control. Until a flash flood hits the park where she works, and hot Chris Forrester shows up the exact moment she needs a hero.

Chris proves he can save lives-and weaken a girl's knees. But how can she make him understand that she's off-limits, that getting close to her will endanger his life? Her happiness or his safety: it shouldn't even be a choice.

Because when you love someone, you protect them, no matter the cost. At least, that's what Angela keeps telling herself....

Their eyes locked and Chris’ gaze dropped to her mouth. It fell ajar and her tongue poked out to wet her bottom lip. He snatched his gaze back to the sky. They were in the middle of a disaster situation. They were reaching out to each other for support. Nothing more. Nothing less. So why the hell was his heart beating like a damn jackhammer? 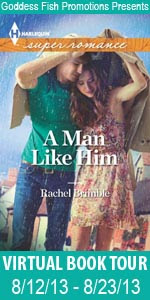 He shielded his eyes against the sun and prayed to God she hadn’t seen his need to kiss her. He focused on the helicopters. “Damn it.”

She shifted beside him and he felt her gaze on him once more. “What is it?”

“They’re not going to be any help to the people stranded in the trees.”

“Those vultures aren’t going to do a damn bit of good. Where are the rescue teams?”

“What are you talking about? What vultures?”

“Can’t you see?” He shot his arm toward the sky as frustration hummed along his nerve endings. “They’re TV helicopters. A fat lot of bloody help--”

Chris turned. Her face grew ashen and she swayed back on her heels, her eyes wide with terror. She gripped his forearm. “Help me. Don’t let them see me. You have to do something.”

“What? What are you talking about?”

Without thinking, he pulled her into his arms and she buried her face into his chest. He brought one hand to the back of her head, the other to the small of her back and pulled her close. She fit the contours of his body like she was meant to be there.

She shook her head against his chest. “It’s over. It’s all over.”

The helicopters circled one more time and then flew away, disappearing over the horizon once more. “They’ve gone. Angela? Look at me. What is it?”

She pulled back and tears slipped over her lower lids and down her cheeks. “I’m dead. He’s coming. He’s coming and this time he’ll kill me.”

He gripped her forearms, adrenaline filling his blood on a protective wave. “Who will? What are you talking about?”

She closed her eyes. “My husband.” 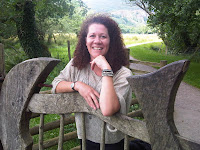 Rachel lives with her husband and two young daughters in a small town near Bath in the UK. After having several novels published by small US presses, she secured agent representation in 2011. In 2012, she sold two books to Harlequin Superromance. She also writes Victorian romance for Kensington--her debut was released in April 2013.

16 Marsden Place with Omnific Publishing is her first romantic comedy since 2010.

She has just signed a further three-book contract with Harlequin Superromance.

Rachel is a member of the Romantic Novelists Association and Romance Writers of America. When she isn’t writing, you’ll find Rachel with her head in a book or walking the beautiful English countryside with her family and beloved black Lab, Max. Her dream place to live is Bourton-on-the-Water in South West England…although she hopes a dream visit to Canada might just change her mind!

She likes nothing more than connecting and chatting with her readers and fellow romance writers. Rachel would love to hear from you!