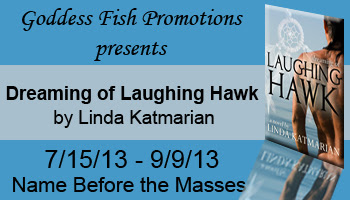 Linda will be awarding a $25 Amazon gift card to a randomly drawn commenter during the tour. Please leave a comment and your email address so you may be contacted if you are the lucky winner. Don't forget to stop by the other stops on the tour stops to increase your chances of winning.
http://goddessfishpromotions.blogspot.com/2013/05/virtual-nbtm-tour-dreaming-of-laughing.html

Crystal: Today as part of the Goddess Fish tour, I have the opportunity to interview Linda Katmarian. Thank you so much for stopping by today. Would you share a little bit about yourself with us today?

Linda: After winding up my career as a technical writer, I am at last free to pursue my interest in fiction full time. I am a lifelong reader, have a Master’s degree in French literature, and have studied fiction writing under Sol Stein, a prolific novelist and former owner of Stein and Day Publishing in New York.


Crystal: Do you have any special tradition that you like to do when a book is released?

Linda: I am a debut novelist so I have not established any traditions as far as book releases are concerned.

Linda: Most of my time the last 6 months has been focused on self-publishing. I am starting to think about a next book, but so far it hasn’t started to jell yet. I’m just playing around with ideas and jotting down a few scenes. And I’ll admit I’ve let home repairs and gardening and lots of other things get in the way.

Linda: I have no special routine—a cup of tea, a little background music and an escape plan when I get restless. Sometimes I write when I’m inspired; other times I just write to see what happens.

Linda: Yes, there was research involved in writing Dreaming of Laughing Hawk. I suppose the most interesting research was civil rights history in the 1960s in LA and Mississippi and trying to slip into that mindset and experience. It’s fun to read some of the firsthand accounts of those times. My novel is not a story about the civil rights movement, but the civil rights movement is a backdrop to my story and it touches the lives of my characters. The fascinating thing is that after 50 years, we have various state legislatures trying to undo the Civil Rights Act. When you read those old accounts, you are struck by how much they sacrificed for future generations.

Linda: I love anyone who can tell an original story with unique characters that moves along at a good pace because the dialog is crisp, the scenes are visual but not overdone, and the language is fluid. I’m partial to Janet Fitch (White Oleander), Louise Erdrich (Beet Queen, Love Medicine), Graham Green (The Heart of the Matter), Isabel Allende (The House of Spirits), Katherine Boo (Beyond the Beautiful Forevers), Paul French (Midnight in Peking) and on and on.

Crystal: Is there any genre you haven’t written that you would like to try?

Linda: Although I classify Dreaming of Laughing Hawk as romantic suspense, I feel my writing leans more toward mainstream or literary and that is where I probably feel more comfortable—mainstream because my intent to make my writing accessible to everyone, but literary because I think character development and style are important.

Linda: I like this little scene of Hawk’s confrontation with a hooker in a bar. He is accompanied by his uncle Killer (aka Kills at Night). Here is just a snippet.

~~~~~~~~~~~~~~~~~~
Favorite Scene Excerpt:
The room was dimly lit and had a hazy red glow. Bottles of liquor lined the shelves behind the bartender who was all business and no smile. Saturday night was hopping, and there were a couple of pretty waitresses in short tight skirts and low-cut tops running back and forth. Usually the jukebox was playing, but tonight a smooth jazz floated just above the haze and the din of voices and clinking glasses. Some struggling musician had managed to talk the owner into a little play time.
Hawk saw her coming—a well-built blond with ample cleavage and a dangerous swing of the hips. She picked the bar stool next to him.
"Thirsty," she said. "What do you recommend?"
Hawk stared at the damp blond ringlets that clung to the nape of her neck. She smelled hot. A concoction of malt and perfume cut with smoke.
"A cold beer. Schlitz," Hawk said.
"No, Pabst."
Hawk ordered her beer, scotch for himself and Killer.
Killer leaned forward to get a better look.
When the bartender brought the round, she said, "I'll have a little salt."
Hawk paid.
She sprinkled salt into the beer and took a long drink. "Thanks. I was parched." Her tongue chased the salt on the glass. "What's your name?"
"Laughing Hawk."
"Indian?"
"Hawk is what I'm called."
"I thought you was Mexican or something like that." She slipped her hand into her blouse and pulled up her bra strap. "My name's Angelique."
"Good name," Hawk replied.
"I never knowed an Indian before."
"First time for everything."
She laughed, looking like a woman who had just found her compass, and then she lightly brushed a thread off his sleeve. "This joint plays the best music, don't you think?"
That was news to him, but he decided to throw her a bone. "You a musician?" Hawk felt his uncle’s sharp elbow against his.

In 1964 Elizabeth Leigh is looking forward to college, escape from her unhappy home, and the fulfillment of her dreams. Adventure. Love. Her place in the sun. On a restless afternoon, she leaves school early and discovers her mother is packing to run off with a lover, abandoning Elizabeth and her stepfather. Worse, she learns her mother has squandered the college money her grandfather left her.

A fortuitous invitation from her cousin Melina to come to Los Angeles rescues her from an uncertain future. In Los Angeles, Elizabeth finds security in the embrace of her aunt’s family and is introduced to the man who soon becomes her fiancé, Collin Greenslade, an ambitious, up-and-coming real estate developer. Life could not be more perfect.

When her cousin’s boyfriend, a civil rights activist, has his Thunderbird vandalized in Mississippi, he enlists his roommate, Mark Laughing Hawk, to tow his car back home. Melina insists that she and Elizabeth should come along for the ride, but what starts as a fun romp across the country becomes a journey of the soul that complicates love and endangers lives.

Dreaming of Laughing Hawk explores the desire for love, power, and sense of purpose and the lengths we will go to attain them. 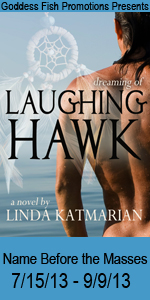 At her insistence, James had driven her by Grandfather's old farm one day. She had claimed curiosity, but she had gone expecting to rediscover something. The place had been burnt to the ground, her childhood memories reduced to a blackened foundation and a dingy clutter of outer buildings.

The image of leaving that spectacle of ruin was burnt in her mind—she and James driving down the gravel road. Weeds and the low-hanging branches of unpruned trees swooshed and thumped against the car while gravel popped loudly under the car's tires. As the car had bumped along, a flock of startled black birds exploded out of the brush. For a moment, they fluttered and swirled about like pieces of charred paper in the draft of a flame and then they were gone. The mind could play such tricks. 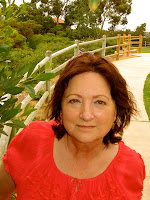 Author Linda Katmarian grew up in the Midwest and graduated with a Master’s Degree in French literature from Illinois State University. She has studied under Sol Stein, prolific author and former owner of Stein & Day publishing company in New York, and Louella Nelson, an experienced romance writer and teacher of fiction writing. In 2012, after a long career as a technical writer, Linda committed herself to writing fiction full time. She lives in Southern California. DREAMING OF LAUGHING HAWK is her debut novel.