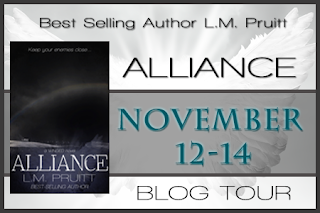 I fell from the Talmadge Bridge the week before I turned thirty. I was given a choice: Go to Heaven. Go back to my life in Savannah. Or spend eternity fighting evil under the direction of the archangels. I chose the demons--and the angels. I chose the Winged.

In the last year, Joanne Watson has died, fallen in love, fought demons and earned her Wings. None of that compares to what's coming next.... Life as a member of the Winged isn't perfect--or easy. There's always some new camp drama. There's always a demon ready for a fight. There's always death. And now there's the Resistance. Joanne must choose again, this time between her fellow Winged and their burning desire for change or the archangels and the eternal vow she made. Even in the afterlife, one truth remains--everything ends

In the last year, Joanne Watson has survived repeated attempts on her life, wholesale slaughter, and the dissolution on the cornerstone of her new existence. And the hard times are only beginning. As the line between right and wrong, friend and foe, and good and evil continue to blur, Joanne is forced to face another irrefutable fact. The most dangerous demons to fight are the ones you can't see.

The last six months have seen more death and destruction than any could have predicted. And the war is only beginning. With the fight taking Joanne and her friends from city streets to abandoned farms to the center of the earth, only one thing is certain. The hunters are now the hunted.

The Fallen have one goal--storm the gates of Heaven and reclaim their heritage.
The Winged have one mission--to prevent it all costs. From North America to Africa, Europe to South American, the stage is being set for the final battle, the one to end all worlds, and with it comes an ugly truth. Keep your friends close--and your enemies closer.

“Barry, I don’t feel like playing Monopoly with you. Besides, I’ve told you a hundred times, you need at least three people for the game to even be worth the headache.”
“Monopoly would be the excruciatingly long board game Danielle is so fond of, correct? Why in the name of everything holy would you believe Barry would want to play such a thing?”
I opened my eyes and stared at Michael, sitting on the coffee table. “I’m either dreaming or hallucinating. I’m fine with either one, I’ll worry about the health implications later.”
“You’re not doing either.” He leaned forward, tucking a loose strand of hair behind my ear. His fingers trailed down the line of my jaw, his thumb pressing into my lower lip. “And for the first time in weeks, neither am I.”
“Thank God.” I grabbed his shirt, yanking him toward me. Our mouths collided, teeth and tongues fighting with each other in a war nobody was going to lose. When the breath was all but gone from my lungs I came up for air, sucking it down in one huge gulp before attacking him again.
Fabric ripped, his shirt, mine, it was impossible to tell and I didn’t care. All that mattered was his skin under my hands, muscles and scars and a fever burning from the inside out. His teeth clamped down on my shoulder, fierce enough I knew there’d be a bruise, the kind that would last for days.
I wanted more.
Suddenly we were on our feet, stumbling down the hall. I pulled at his belt, yanking it free of his pants even as he did the same to mine. We hit one wall and then another, a picture frame sliding off its hook and crashing to the floor. My bra snapped, the elastic pinging on my already over sensitive skin. When we finally reached the tiny room I’d claimed for my own, we collapsed on the twin bed.
“Boots.” I moaned the word out, twisting my head until he could sink his teeth into the curve of my neck. “We have to get them off.”
“Forget the boots.” He yanked my pants down over my hips, shoving my thighs apart. He jerked on his zipper, reaching into his pants and freeing his cock. “I can’t wait.”
He rammed deep into me, the shaft stretching me, the head slamming against my cervix. My shocked gasp was a mixture of pain and pleasure, my nails digging in to his torso. The denim restrained my legs, tightening my inner muscles almost to the point of pain.
There was nothing romantic here, nothing soft or gentle. Only need and want and the kind of hunger that promised to never, ever be fully sated.

L.M. Pruitt has been reading and writing for as long as she can remember. A native of Florida with a love of New Orleans, she has the uncanny ability to find humor in most things and would probably kill a plastic plant. She knows this because she's killed bamboo. Twice. She is the author of the Jude Magdalyn series, the Moon Rising series, and Taken: A Frankie Post Novel. Her current series, WINGED, is about the choice one woman makes after dying. The first four books in the series are available now. Ms. Pruitt is releasing the next book in the series, ALLIANCE, November 2013.

L.M. Loves to hear from her readers ... Look her up on any of the following lmpruitt.org/TWITTER FACBOOK