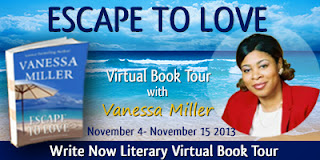 ESCAPE TO LOVE
By VANESSA MILLER

She wanted a peaceful escape to the Bahamas. What she got was love and danger at every turn.

Renee Thomas can’t trust herself to pick a good man. Putting her life back together after being in an abusive relationship, she finds a job. Her new job isn’t exciting, but it nets one major positive: she reconnects with an old flame, but like a moth to a flame, her abuser also tries to reconnect with disastrous results, not only for her, but everyone she loves.

Jay Morris can't afford any distractions. He's staking his entire career on an IPO that must go off without any glitches...but he can't stop thinking about Renee and the fear he saw in her eyes. He’d give up everything in order to protect her... he’d walk through fire for the chance to love her.

Prayer, praise, reading the bible, going to church and loving one another as Christ loved the church are all important things for a believer. But if you have lost your ability to truly praise God then you probably don’t feel like doing any of the other things that are important to the believer either.
This is the reason I began the Praise Him Anyhow Series, I truly believe that if we learn to praise God through whatever situation we are faced with, God will begin to turn those situations around. How do I know... because I’ve been there.
I used to think of myself as a super-Christian. In 1994, God saved me and instantly changed me. Everything in my life became new and I felt invisible... I could do anything. I would pray for things and then see them materialize. But then the worse year of my life, 2010 rolled in and my mother was diagnosed with kidney cancer and then died from the disease on December 30, 2010. It’s a hard thing to lose someone who was both your mother and your friend.
I withdrew, became depressed and refused to praise God, because my heart had been broken and I just didn’t see anything praise worthy in that. And just like that, for the first time in my Christian walk I no longer felt as if I had a connection with my Lord and savior.
I would go to church and instead of lifting my hands in praise to God as I had always done, I would sit in my seat and cry my eyes out. When I realized what I had allowed to happen by way of not praising God, I set about changing my circumstances. Yes, my mother was gone from me forever, but there were still things in my life that were praise worthy and I was determined to find them.
And that’s what the Praise Him Anyhow series does for the believer who has lost his or her joy... these books help Christians find their praise again. I have never been more proud of any series I have written because I know that the message in these novellas brought me back to where I needed to be in God and they are doing the same thing for thousands of others who dare to give the Praise Him Anyhow Series a chance.
This series has romance, suspense, angels and most of all each novella deals with praise in unique ways. So if you need to get your praise back or just enjoy reading Christian fiction or books with romance  in them, the Praise Him Anyhow Series is for you. Each book will be available in ebook, print and audio book formats.
Here are the titles that are currently available: Tears Fall at Night, Joy Comes in the Morning, A Forever Kind of Love, Ramsey’s Praise and Escape to Love. There is also a Praise Him Anyhow Journal that compliments the series, for those of us who need step by step instructions and journal time in order to get the praise back into our lives.

If you have further questions or would like to reach out to me, I can be reached at: www.vanessamiller.com or you can join me on other social media outlets:
~~~~~~~~~~~~~~~~~~~
About The Author:

Vanessa Miller of Dayton, Ohio, is a best-selling author, playwright, and motivational speaker. Her stage productions include: Get You Some Business, Don’t Turn Your Back on God, and Can’t You Hear Them Crying. Vanessa is currently in the process of turning the novels in the Rain Series into stage productions.
Vanessa has been writing since she was a young child. When she wasn’t writing poetry, short stories, stage plays and novels, reading great books consumed her free time. However, it wasn’t until she committed her life to the Lord in 1994 that she realized all gifts and anointing come from God. She then set out to write redemption stories that glorify God.
To date, Vanessa has completed the Rain and Storm Series. She is currently working on the Forsaken series, Second Chance at Love series and a single title, Long Time Coming. Vanessa believes that each book will touch readers across the country in a special way. It is, after all, her God-given destiny to write and produce plays and novels that bring deliverance to God’s people. These books have received rave reviews, winning Best Christian Fiction Awards and topping numerous Bestseller’s lists.
· Best Christian Fiction Mahogany Award 2003
· Red Rose Award for Excellence in Christian Fiction 2004
· Nominated for the NAACP Image Award (Christian Fiction) 2004
· Essence Bestseller’s List March 2008; May 2008 (Former Rain)
· Essence Bestseller’s List September 2008 (Rain Storm)
· Black Expressions Book Club Alternate Selection 2007, 2008 & 2009.
Vanessa originally self-published, then in 2006 she signed a five-book deal with Urban Christian/Kensington. Her books can now be found in Wal-Mart, and almost all major bookstores, including African American bookstores and online bookstores such as Amazon.com.
Vanessa is a dedicated Christian and devoted mother. She graduated from Capital University with a degree in Organizational Communication. In 2007, Vanessa was ordained by her church as an exhorter. Vanessa believes this was the right position for her because God has called her to exhort readers and to help them rediscover their place with the Lord.
Most of Vanessa’s published novels depict characters that are lost and in need of redemption. The books have received countless favorable reviews.

What others are saying…. “Readers will be emotionally invested in the characters from the start. The character’s pain and inner struggles lead to heart-wrenching scenes. Themes of faith, forgiveness and reconciliation make this a powerful testament to God’s faithfulness that will remain with the reader long after the final page.” -- RT Reviewer

a Rafflecopter giveaway
Posted by Reviews By Crystal at 12:00 AM