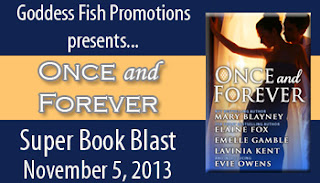 Once and Forever
An anthology

The authors will be awarding an eBook copy of "Once and Forever" to five randomly drawn commenters during the tour, and a Grand Prize of a $25 Amazon GC to one randomly drawn commenter during the tour. So please be sure to leave a comment below along with your email address, so you may be contacted if you are the lucky winner. To Increase your chances of winning stop by the other tour stops. You may found the other locations here...  http://goddessfishpromotions.blogspot.com/2013/10/virtual-super-book-blast-once-and.html

Once and Forever -  An anthology

From five compelling authors, five original novellas which will make you laugh and cry, and believe in a love that once found will last forever. Meet a duke, a psychic, a bodyguard and a professor…and one "guardian fairy" in absorbing stories ranging from regency and contemporary romance to paranormal and women's fiction.

Actress Kendall Marshall is determined to get an autograph for her sick sister from famous TV personality Mike O’Hara, the Oprah Winfrey of sports. In the process she meets his brother, security consultant Steve Marshall, lands a job on O’Hara’s show and gets in the way of a man set on causing big trouble. As the stalkers attacks escalate, Steve and Kendall are thrown together and find it impossible to ignore the chemistry between them.

When a beautiful woman shows up at the Vineyard Inn, wine manager Kim is certain she’s been sent by fate for the inn’s owner, Cooper. Self-effacing to a fault, Kim knows she can’t hold a candle to Principessa Bella, who also seems to know even more about wine than Kim herself, but her heart has belonged to Cooper since they shared one kiss as teenagers.

While Prin sweeps easily into the job of sommelier at the renowned inn, Kim is afraid Prin will sweep just as surely into Cooper’s arms if she doesn’t do something about it. Can she tell Cooper how she feels without losing even his friendship?

Kim is willing to try except for one problem: she’s almost certainly losing her mind. Or is that belching, swearing, smoking, farting fairy – who claims to be trying to help her – real?

Duets offers alternating looks into the lives of two women who would seem to have little or nothing in common.

Screen star Molly Harper is on the verge of marrying a man who has swept her off her feet, thought perhaps hasn’t swept all her feelings for her first love away. Anne Sullivan, happily married for twenty-five years, is fighting to hold onto the man she loves, and hold off a confrontation that could shatter her family’s image of what they are.

Duets confronts a past secret that ties these two women’s lives together, just as chance events turn Molly and Anne’s worlds upside down.

Never and Forever is the beginning of the love story of two people who shouldn’t belong together.  Molly, Miss Wilkes, runs an employment agency helping women of quality find positions perfected suited to their characters.  Although her father held the title of Earl for just over a week before his death, Molly has never wanted to be a lady.  She knows her place in this world – and it is not at the center of society.

The Duke of Radford also knows his place in this world – and it’s above everybody else’s.  He cannot imagine a world without all the privilege and power that comes from being Radford.  He’s had foreign princesses and heiresses dangled before him for years.  Why would he ever have interest in a simple woman who doesn’t even understand that she should want to be a duchess?

Can these two overcome the obstacles of their own beliefs and realize that love can make all things possible?

Never and forever are both a very long time.  Where will their love fit?

Psychic Martin Sterling doesn't trust cops--and the feeling is mutual. Detective Erin Healy needs more than a ghost story to save her job and reputation. Her partner is dead, a million dollars in drugs and money is missing, and all the evidence points to her.

Can a sexy psychic and a by the book cop, trapped between the living and the dead, unearth the truth? Or will a cold-blooded killer get away with it all...

For a long moment he just stared back at her, into her, somehow, and Erin wondered what it would be like to believe. In psychics and magic and...to really believe in anything, other than the life you were living. She had police in her blood, though. If you couldn't see it, feel it, taste it, smell it--if you couldn't measure it in some way--it wasn't real.

No matter how much you might wish it was.

But how did he know the girl was pregnant? She wasn't showing yet.

Then she remembered he'd been watching them long before he joined them at the table, and in her mind's eye she saw the way Mitra's hands closed over her abdomen. Protecting and comforting. You didn't have to be psychic to figure that out. Just observant.

And this guy was definitely observant.

Most con men were.

NY Times Best Selling author Mary Blayney’s first two romances were contemporaries published by Silhouette Books. Since 2000 she has been writing regency set historical novels and novellas for Kensington, Bantam and Berkley. Returning to the contemporary market with her novella in ONCE AND FOREVER, Mary hopes to continue to tell stories set in both the regency and the 21st century.

Married to a retired Coast Guard officer, Mary has lived all over the US from Alaska to Puerto Rico, but is now settled near Annapolis, Maryland within sight of the Chesapeake Bay. Her life close to the Coast Guard and its mission to search and rescue, has convinced her that life is best lived with joy, love and a generous heart. Those convictions are what she most wantS to share with her readers. Family will always play a strong part in her books since she believes that family relationships are as fundamental as the love between a man and a woman.

“One More Kiss is a delightful combination of social comedy, slight mystery, and sweet romance. It’s a thoroughly charming novel, well worth a read.” . . .(NY Journal of Books)

“Blayney's wish-granting coin entwines a pair of lonely adventure seekers in romance beyond their lives as a servant and a sergeant in her charming 1816 fantasy, If Wishes Were Horses. . . .” (Publishers Weekley, October 2013)

NY Times Best Selling author Elaine Fox began her career writing time-travel romances, such as Rita-finalist Traveler, and Impostor (both now available as e-books on Amazon and Barnes & Noble), then added historicals to the mix. After six books with Leisure Books, she moved to Avon to begin writing contemporary romances. Her first, Maybe Baby, hit the USA Today Bestseller list and eight more novels and four novellas followed, with several of them also reaching the USA Today list.

Most recently she participated in the anthology Mirror, Mirror from Berkley Publishers, which debuted at #3 on the New York Times Bestseller list.

Elaine lives just outside of Washington, D.C., with a small Cuban dog and a lovely Argentinean man. Elaine is trying to learn Spanish.

Praise for Beauty, Sleeping, in the anthology MIRROR, MIRROR:

“HELLO, DOGGY! by Elaine Fox is a laugh-out-loud, character-driven story that will captivate readers from their first introduction to the lovable pooch and her dreamy owner.” Fresh Fiction

Praise for BEWARE OF DOUG:

“A must read.” Fresh Fiction


Emelle Gamble was a writer at an early age, bursting with the requisite childhood stories of introspection. These evolved into bad teen poetry and worse short stories. She took her first stab at full length fiction in an adult education writing class when her kids were in bed.  As M.L. Gamble, she published several romantic suspense novels with Harlequin. She has contracted with Soul Mate Publishing for Secret Sister, published in the summer of 2013, and Dating Cary Grant, a Spring 2014 release.

Molly Harper will be released by Posh Publishing in December, 2013.

Emelle lives in suburban Washington D.C. with her husband, ‘Phil-the-fist’, her hero of thirty years,  and two orange cats, Lucy and Bella. These girls, like all good villains, have their reasons for misbehaving. Her daughter, Olivia, and son, Allen, are happily launched on their own and contributing great things to society, their mother’s fondest wish.

“Along with being a very unique and captivating plot, SECRET SISTER offers a shocking turn of the paranormal kind. So if you are the type of person that wants ordinary romance in a book, you won't find that here. This is a story of friendship, family, and most of all, true love and what those things can mean. I cannot recommend SECRET SISTER strongly enough… “ Fresh Fiction, Fresh Reviews

"If you're looking for a typical women's fiction/romance, don't look here... this story has a twist of the paranormal that will have you willingly stretching your belief in order to enjoy the plot. Emelle Gamble has created a story that will tear your heart out."  Long and Short Reviews

Evie Owens was born in Japan, but grew up on a dairy farm in Upper Michigan. She's waited tables and tended bar, which makes her a very good tipper, but writing is her passion. She's thrilled to be included in this anthology with some of her favorite authors.

These days, Evie lives in Maryland while her two fabulous daughters and one glorious granddaughter live too far away. Leaving her no alternative but to turn to a life of crazy cat ladyness (except for the "cat" and the "ladyness" parts).

Lavinia Kent never knew that most people don’t make up stories in their heads to pass the time. She still has a hard time understanding how those who don’t survive the doctor’s waiting room or a grocery store line without another world to escape into.

Growing up in New York state and Wisconsin, Lavinia graduated from Wellesley College and, for reasons that are still not quite clear, also holds an MBA from Washington, D.C.’s Georgetown University. Lavinia has remained in Washington ever since.

She lives under the gracious (and usually benign) rule of Erzsebet, the cat, along with her husband, three children, one cockatiel, two rats, and Erzsebet’s younger, subordinate tomcat, otherwise known as The Golden Snitch.

As the mother of three, Lavinia finds “leisure time” to be ever-elusive, but when she is not reading romance novels, she watches far too much HBO and reality television. It must also be noted that she has an encyclopedic knowledge of all things Buffy and Doctor Who.

She was excited (and humbled and thrilled and over the moon) about the publication of her first historical Romance, A Talent for Sin, in June 2009. Her second book, Bound by Temptation,was released in February 2010.  Her third book, Taken by Desire, is available in December 2010.