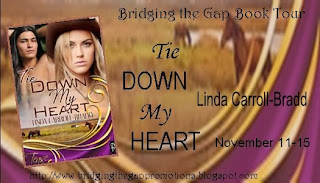 Tie Down My Heart
by Linda Carroll-Bradd

A contemporary Western Novella
From the Tease Line at Decadent Publishing

Q: How about you introduce yourself by providing the basics?

A: My name’s Didi Pierpont, mid-twenties (cuz a lady doesn’t tell her real age) and I’m Texas born and bred. I feel most like myself when wearing a pair of cowboy boots.

Q: Where were you raised?

A: On the family ranch just outside of Ft. Worth. My daddy and brothers breed horses and we run a few hundred head of cattle.

A: Two older brothers, JJ (short for Jason Jr.) and Garland, who tormented me all through our childhood years. Bossy, arrogant cowboys who thought their little sister ought to be just like them. And Daddy and Mama too.

Q: Did you attend college?

A: Two years of community college near home before finishing at Texas A&M.

Q: Are you athletic?

A: I keep in shape with yoga, horseback riding and I love to dance.

Q: Did you always want to be a journalist?

A: Sometimes I feel like I was destined for this profession. My mama steered me into the pageant circuit when I was just a bitty girl. After years of being asked questions about why I chose this outfit or that song for my talent performance, I decided I wanted to be the one asking the questions.

Q: What’s the craziest thing that’s ever happened to you?

A: Really, it’s a toss-up between an embarrassing wardrobe malfunction in the talent segment of the Miss Rodeo Queen pageant when I was seventeen and a shredded skirt in a line-dance competition last year. My hem caught on a cowboy’s spur and split all the way to my… let’s just say I felt the air conditioning right along my whole right leg. Who wears spurs to a dance hall?

Q: Talk about your favorite setting for a date.

A: I don’t think the setting is more important than who I’m with. When I’m with the man of my dreams, I think the setting will fade away because I’ll be so in tune with him—listening to the meaning of what he’s says, trading adoring looks, sharing soft caresses that leave our skin tingling. (She sighs)

Q: Have you met the man of your dreams?

Didi Pierpont needs an in-depth interview with a rodeo participant at the Northern Texas Regional Championships. Problem is, most of the entrants remember her from her beauty pageant days and don’t take her seriously. Right before a calf-roping event, she lines up an interview with a striking Native American cowboy. But the calf is uncooperative, and Chay Red Fox is wheeled out on a stretcher. What’s an ace reporter to do but volunteer to watch him for symptoms of a concussion?
Chay’s cocky attitude is his defense against the allure of this nosy, but so cute, reporter. He doesn’t think his soul can take another hit from a woman. But she hangs tighter than a bull rider, forcing him to question his determination to protect his privacy and his heart.
The more Didi learns about this intriguing man, the more her heart melts. Can she keep her journalistic distance, or will she succumb to the man who has her tied in knots?

First hurdle crossed. Didi stepped through the doorway and walked along the row of curtained spaces. Just like the fitting rooms in her favorite specialty shops. Except for the brownish grit underfoot. A shudder ran through her. She’d be leaving her boots outside on the hotel room balcony tonight.
Hmmm. As she walked, she noticed the majority of the curtains were open, displaying small, empty cubicles. Somehow, she’d thought she’d find a central room with competitors hanging around and she could have her choice of subjects. Not the case. At the very end, she spotted a partially closed curtain and her heart sped up.
Under the curtain was a pair of scuffed tan boots topped with worn jeans. Stopping short of the cubicle, she angled her position until she could look into the mirror and catch a glimpse of a well-muscled chest. Closer inspection revealed a small patch of black hair between his tanned pecs, bisected by a long scar. The white line started on the man’s breastbone and disappeared under the bandage he was busy wrapping around his ribs.
Ooh, that injury must have hurt. Her hand moved to the skin above her camisole and rubbed, as if to erase the mark from the man’s bronze skin. Wonder what caused that type of cut?
“Like what you’re gawking at?”
His raspy voice made her gasp and stiffen her stance. Her gaze shot to the mirror and met narrowed, dark eyes under twin black slashes of frowning eyebrows. “Pardon my rudeness. I haven’t seen a scar quite like that.”
“Must not have been around many bull riders.”
“I used to live with a couple, but they were unscathed.” Her gaze went back to his chest, and her stomach tumbled at the thought of either JJ or Garland suffering through a similar injury.
An eyebrow quirked, and he pulled open the curtain. “Lived with a couple? Angel, this is getting interesting.”
“Oh, not what you’re thinking.” Her cheeks flamed. “They’re my older brothers—dull as dishwater.” She sucked in a breath and extended her hand. “Didi Pierpont from the Dallas County Gazette. I’m working on a piece about individuals who compete at rodeos and would love to interview you.”
“Nice to meet you, ma’am.” His fingers touched the brim of his hat before his calloused hand enclosed hers and shook. “I’ll pass on the interview.”
For an instant, her shoulders sagged until she pulled on the natural persistence that her daddy claimed was strengthened by years of beauty-pageant competition. “Now, don’t be hasty. A bit of press is always good for a rodeo-rider’s career. I saw those posters on my way in. The association spent a chunk of change to promote those riders.” She studied his face and thought she recognized him as a bronc rider. “A good story could boost ticket sales for the next event.”
“Those posters aren’t new. Do you even know who I am?” He settled his hat more firmly on his head, then squared his stance and crossed both arms over his muscled chest.
Which only pumped his biceps into rounded bulges that she fought to ignore. The man’s body was honed and chiseled with no sign of fat anywhere. “If I know, do I get the interview?”
“Depends.”
“On what?” Her gaze narrowed on the smirk that threatened his lips.
“Dunno.” A shoulder lifted in a shrug. “I leave my options open.”

After years spent in the administrative support field, Linda decided to exercise another part of her brain and write a novel. She loved reading romance and figured that’s what she’d write. Easier said than done. After years of workshops and RWA chapter meetings, she finally saw her manuscripts place in contests. Twelve years after her first writing class, she sold a confession story. From that point on, she couldn’t be stopped and is always pleased when her sweet contemporary and historical stories find homes.
With interests as widespread as baking, crocheting, watching dog agility matches, and reading thrillers by Swedish authors, Linda is the mother to 4 adult children and grandmother to 2 granddaughters. She currently lives in the southern California Mountains with her husband of 34 years and their two spoiled dogs.