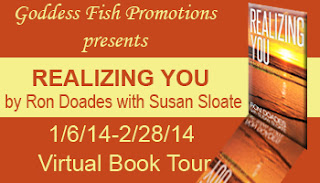 REALIZING YOU
By Ron Doade with Susan Sloate


One randomly chosen commenter will win a $50 Amazon/BN.com gift card. Please use the rafflecopter below to enter. Also don't forget to visit the other tour stops. The other locations may be found here..  http://goddessfishpromotions.blogspot.com/2013/10/virtual-book-tour-realizing-you-by-ron.html

As part of this Goddess Fish Tour Ron Doade answered a few question for a quick Q & A.

Q: Any weird things you do when you’re alone?

A: Nothing that I am willing to reveal in public. But, here a little something. I sit at my computer and do random Google searches of people I used to know. My sentimentality shows up in various forms, even at idle times.

Q:What is your favorite quote and why?

A: “Only those who will risk going too far can possibly find out how far one can go,” by T.S. Eliot. I have a framed picture with that quote handing on my kitchen wall, which I look at every day. I like the quote because that’s how I try to live major portions of my life. I like to try new things. I experiment with new ideas in consulting. I think people can only expand their minds and life horizons by delving into areas that make them feel somewhat uncomfortable. Authoring a new genre of book—self-help fiction—Realizing You, is a current example of my putting this quote into action.

Q: What is your favorite ice cream flavor?

A:Coconut. Sweet and creamy. It melts in my mouth, literally and figuratively. For me, having a dish of coconut ice cream is a sensuous experience. Need I say more?

A: I don’t have a good answer to this question. The one I would most admire is Apollo. He represents complexity, light, sun, truth and healing, among other things. I consider myself complex (bad news and good news), light (as in enlightening), truthful (as in, I don’t lie, and have zero tolerance for those who do), and healing (always trying to help people to heal their emotional scares and move forward with their lives). Those five Apollo traits are in many ways a pervasive, underlying theme of Realizing You, and embedded in each of the main characters. Read the book and you’ll see how.

Q: What are four things you can’t live without?

A: Intellectual stimulation, physical stimulation (running and …), my family, a few very close friends. I like to learn and do things—reading and going to new places. I love to run, which I do at least three days a week. I love my (adult) children, and couldn’t imagine life without them. I love my sister, who is also one of my closest friends. My other close friends are a treasure. We can be our real and (mostly) uninhibited selves with each other. Each of these four things helps me to feel free and hopeful about my life and all of humankind.

Meet Robby Aihn, the newest star in the self-help universe and author of the runaway bestseller, Realizing You, now struggling with his first taste of fame. Though his five principles for good living are changing other people’s lives, his own life is starting to fall apart. When Robby stages a lavish self-help conference in Dallas, he attracts others with their own secrets: his estranged wife and unhappy teenage daughter; the businessman pursuing his own agenda; the all-star pitcher facing the end of his career; and the shy co-author Robby never acknowledged, who is searching for meaning in her own life. Join Robby and the others on their journey toward understanding and fulfillment, in this truly novel approach to changing YOUR life.

Sophie was the last one awake. She lay tensely in the queen-size bed next to her mother’s until she heard Marie’s soft, even breathing. Certain that her mother was deeply asleep, she slipped out of bed, tiptoed to her suitcase, and took out the little pink and red bag. Inside nestled a print scarf and a multi-colored beaded bracelet. Both items still bore their price tags. She’d snipped the tag off only the tortoiseshell hair comb so she could wear it today. She took it from the nightstand, looked at all three items, shook out and stroked the glossy material of the scarf, then quietly tucked all of them back in the bag, which she pushed deep into her suitcase. She wouldn’t take them out again until she left Dallas. She’d never wear that stupid hair comb again. She told herself it wasn’t as pretty as she’d thought when she first saw it in the store. The stern little voice inside her head told her that wasn’t the reason.

Sophie refused to allow herself to know what the real reason was.

She hadn’t left Colorado with those items in her suitcase. Her mother didn’t know she had them. She couldn’t explain where she’d gotten them.

But taking them had made her feel better. Everybody did it, at least once or twice. No big deal. She took a deep relaxing breath, thinking about how the act of lifting them from the counter made her feel, and realized she was finally getting drowsy. She crawled into bed, turned over, and was deeply asleep in three minutes.

RON DOADES is president of Ronald Doades & Company, a consulting firm that, since 1977, has helped the people of large and mid-size energy companies improve their individual and corporate performance results by learning from the best-practice experiences of others. A popular speaker on the topic of managing change for optimal results, he holds an MBA from Columbia University and an MS in Psychology from The New School in New York City. Visit him at www.realizingyoubook.com

Susan Sloate is the author of STEALING FIRE (#2 Amazon bestseller and Quarter-Finalist in 2012 Amazon Breakthrough Novel Award Contest), co-author of FORWARD TO CAMELOT: 50TH ANNIVERSARY EDITION and REALIZING YOU. 2003 edition of FORWARD TO CAMELOT, a time-travel thriller, was a finalist in 3 book competitions: 2004 IPPY Awards, 2004 Arizona Authors Assn. Literary Competition and 2008 Beach Read Competition. It was also a #6 Amazon bestseller in Sci-Fi/Fantasy, optioned in 2005 by Fast Carrier Pictures for film. Also author of 17 published young-adult books (fiction and non-fiction, sports, biography, romance, etc), which includes Silver Medal/2007 Children's Moonbeam Awards, for RAY CHARLES: FIND ANOTHER WAY! from Bearport Publishing. MYSTERIES UNWRAPPED: THE SECRETS OF ALCATRAZ (2008, Sterling Publisher) led to author appearance on MYSTERY QUEST: ALCATRAZ, a special for The History Channel, summer 2009. Playwright of two produced plays, screenwriter (2 screen properties optioned), sportswriter (major-league baseball and power volleyball). Founded and chaired the East Cooper Authors Festival in May 2007, a program that brought together published authors with students from primary schools through high school outside Charleston, South Carolina in programs designed to excite students about reading. Inaugural program reached more than 8,000 students in one day.