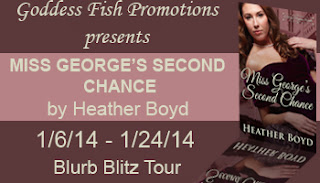 Heather will be awarding an eCopy of Miss George's Second Chance to three randomly drawn commenters during the tour. Please be sure to leave a comment below along with your email address so you may be contacted if you win. To increase your chances of winning visit the other stops on the tour. You may find the other tour locations here.... http://goddessfishpromotions.blogspot.com/2013/11/virtual-blurb-blitz-tour-miss-georges.html
~~~~~~~~~~~~~~~~
BLURB:

When desperately private writer Imogen offered to marry Peter Watson it wasn’t just to save a friend but to secure her own future. With her eyesight failing and no other prospects for marital bliss on the horizon, surely it wouldn’t be too horrible to marry without the benefits of love. But then Peter gains a title a week before they’re set to wed and all of Imogen’s expectations change.

Peter once believed that marriage to Imogen would solve his financial problems. He didn’t mind marrying for convenience and a large fortune when affection was within reach. Yet when he gains a title, an estate, and a fortune of his own the secretive writer releases him from their engagement so he might marry for love. Now he’s returned, unwed and unaware of changes in her life, should he do what is expected or listen to his heart instead?

Difficult situations required desperate measures. Imogen George--writer, spinster and pragmatist--steeled her heart to be as brutal as any heroine before her had ever been. “Have you sulked enough Mr. Watson?”

The man sitting on the dark Brighton shoreline surged to his feet and then faced her. “Hell’s bells, what are you doing here?”

Imogen clenched her hands together to hide their trembling. Standing on the dark beach, waves crashing around them, made her meeting with her best friend’s brother potentially romantic though she doubted it would be. “I have a proposition for you, Mr. Watson. Do sit down.”

She limped forward, annoyed that her clumsiness at dinner earlier in the evening at his house had robbed her of her dignity. It was not every day she pursued a man for conversation, even when he was her best friends elder brother. She was taking quite a risk being here but it was within her power to improve their lot. Peter Watson may lack the good sense to detect and seize his only chance for security, but Imogen would not. She had a plan for her life and Mr. Peter Watson would suit her needs perfectly.

When she found the place she meant to sit, Mr. Watson remembered his manners and gallantly swept his coat from his shoulders and spread it on the ground so she might rest upon it. She was pleased to see that even while desperate, he did retain some good qualities. Her hopes for a smooth resolution soared.

“Where is your chaperone, Miss George?” Mr. Watson asked suddenly, squinting into the darkness toward the township where their respective homes lay.

With her eyesight as poor as it was, Imogen couldn’t say for certain in which direction her reluctant chaperone, her brother Walter, stood, so she waved her hand airily in the direction she’d left him, hoping her companion would not notice or point out if she were utterly wrong. “Walter is over there. Never mind about him for the present. Do sit down so I may avoid suffering a pained neck from looking up at you.”

As Mr. Watson sank to the ground nearby, a weary sigh left his lips. “I am sorry I tumbled you over earlier tonight, Miss George. You have no idea how sorry.”

“I did say at the time not to concern yourself unduly.” In truth, Imogen was often clumsy outside her home. The objects of her surroundings were less likely to jump out and trip her up if she stayed in familiar territory. Friends frequently moved their furniture and if she could see with any degree of certainty, she would never have stood in Peter’s way to have been in danger. As it was, the world was a trifle fuzzy at times—tonight being one of those. “The collision was as much my fault as yours.”

How did Mr. Watson take her presence she couldn’t tell, but she was determined to press on regardless. There was no point beating about the bush when she judged speed was worth being somewhat more forward. She had a solution to offer Mr. Watson that would meet his immediate need and her future requirements. “Marry me.”

Her mouth grew dry and she swallowed, preparing for his response.

At her side, Mr. Watson furiously rubbed his ear. When he lowered his hand and did not turn his head in her direction, she repeated her proposal in a louder voice. “I asked you to marry me, Mr. Watson. What do you have to say about that?”

Imogen heaved a heavy sigh. It had been too much to hope that he would leap on her proposal and agree immediately. A long discussion was undoubtedly necessary to secure his agreement. “I know. And I’m not offering you a bit of it. You need money. Immediately, or you will lose your home and perhaps be forced to debtor’s prison. Your sister’s heart is in danger of breaking if such a calamity should come to pass. I can help get you out of your predicament with little effort on your part and none at all on mine. It is a perfect arrangement.”

He dug a hole in the sand between them with his fingers. “Surely there is someone you fancy to marry rather than me?”

Bestselling historical author Heather Boyd believes every character she creates deserves their own happily-ever-after, no matter how much trouble she puts them through. With that goal in mind, she weaves sizzling English set love stories that push the boundaries of regency era propriety to keep readers enthralled until the wee hours of the morning. Brimming with new ideas, she frequently wishes she could type as fast as she conjures new storylines. While writing full time north of Sydney, Australia, Heather collects dust bunnies in all corners of the house and does her best to wrangle her testosterone-fuelled family into submission.

Amazon Author Page: https://amazon.com/author/heatherboyd
Posted by Reviews By Crystal at 1:00 AM