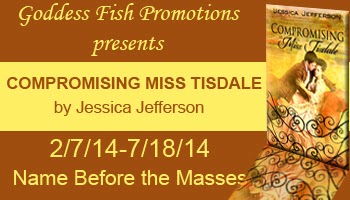 THE AUTHOR WILL BE GIVING AWAY a $25 Amazon or BN.com Gift Certificate. Please be sure to use the Rafflecopter below to enter. Also please visit the other tour stops, you may find those locations here....  http://goddessfishpromotions.blogspot.com/2014/01/name-before-masses-compromising-miss.html

Lord Bristol was a wicked man.
Just the way I like them!
What fun is romance if you can’t live vicariously through your characters?  But I don’t believe it’s simply a one way street; that I alone provide the character with everything they need to leap off the pages and into hearts.  I like to think that perhaps the characters worm their ways into writers’ hearts as well.
The hero in Compromising Miss Tisdale, Duncan Maddox, Earl of Bristol, is practically despicable.  He’s callous and has no interest in things like fidelity and the like.  He has no hobbies (aside from his vices) and no desire to earn an honest dollar, or any dollar for that matter.
So what is there to take away for a modern day writer/housewife?  Duncan was all those things.  But by the book’s end, he’s changed.  Now, that’s not to say he’s completely reformed, but during his journey through the pages he was able to find the light in all aspects of his personality and grow from that.   In one part of the book he describes how he wasn’t completely bad.  For example, he gambled, but never cheated.  He slept with anyone who’d have him, but not a married woman.  Duncan still followed a moral code, even if it was a bit looser than others’.
For all my faults, there must be a success.  Sometimes that’s the hard part – finding that positivity is a bit like looking for proverbial needle in the haystack.  My hero taught me to look for the positive and change from that.  A little wickedness never hurt anyone, as long as you’re good at heart.

Ambrosia Tisdale is the very picture of propriety and the epitome of what a respectable young lady should be. Haunted by a memory and compelled by her family, she pursues perfection to a fault.

The Earl of Bristol, Duncan Maddox, has returned to London after years of familial imposed exile. As the second son, he has led a life filled with frivolity, leisure, and a healthy dose of debauchery. Now his older brother has died, leaving the family’s flailing legacy in Duncan’s unwilling arms.

At the behest of his uncle, Duncan is advised to do the one thing that could provide instant fortune and respectability – he must marry. But there is only one prospect who meets the unique requirements to solve all the Earl’s problems – the lovely Miss Ambrosia Tisdale. But securing the prudent daughter of a Viscount’s hand proves to be more challenging than this scandal ridden second son of an Earl has bargained for.

With scandal, extortion, treachery, and even love itself threatening to keep him from his goal, will Duncan succeed in compromising Miss Tisdale?

James tapped his finger to the cleft in his chin.  “So, I am to assume that you need financial prosperity, respectability, honor, and security virtually overnight?  That is your dilemma?”
Duncan chuckled at the absurdity of the situation.  “In so many words, yes.”

He shrugged.  “Should be simple enough.”

James arched an eyebrow.  “Such a quandary is hardly original to noble men like us.”

“How do you figure?”

“Your predicament is nothing new.  Men of our station have been combating that very issue for years.  And the solution is hardly novel.  I’m quite surprised someone with your acumen hadn’t thought of it earlier.”

“Clearly, I am ignorant, so please-enlighten me.”

“You need to marry.”

Duncan deflated.  “Is that all?”

“Well, you couldn’t just marry anyone.  She must be rich, but not noveau riche.  And her family must be prominent.  She needn’t be from a ducal house necessarily, but with rivaling status in its age and reputation.  And since you’re such a cad, your wife will need to be the picture of morality.  We’re talking the personification of righteousness-no skeletons in the closet, no relatives from the other side of the blanket, no scandals amongst third cousins.  The gossip rags must have nothing on her or her family.”

Duncan felt his nostrils flair.  “Yes, simple indeed.  So, where exactly do you suggest I find this rich Lady Madonna?”

Confused, Duncan thought for a moment.  Then he smacked into the great stone wall of realization at just what it was his friend was implying.  “Miss Tisdale?  You’re suggesting I marry Miss Tisdale?  The Miss Tisdale who you just finished telling me is waiting for the perfect husband–who no doubt has far more prestige and fortune than I?  You’re cracked.”  Duncan turned and started walking back towards the curtain. Jessica Jefferson makes her home in northern Indiana, or as she likes to think of it – almost Chicago.  Jessica originally attended college in hopes of achieving an English degree and writing the next great American novel.  Ten years later she was working as a registered nurse and reading historical romance when she decided to give writing another go-round.

Jessica writes likes she speaks, which has a tendency to be fast paced and humorous.  Jessica is heavily inspired by sweeping, historical romance novels, but aims to take those key emotional elements and inject a fresh blend of quick dialogue and comedy to transport the reader into a story they miss long after the last page is read.  She invites you to visit her at jessicajefferson.com and read her random romance musings.