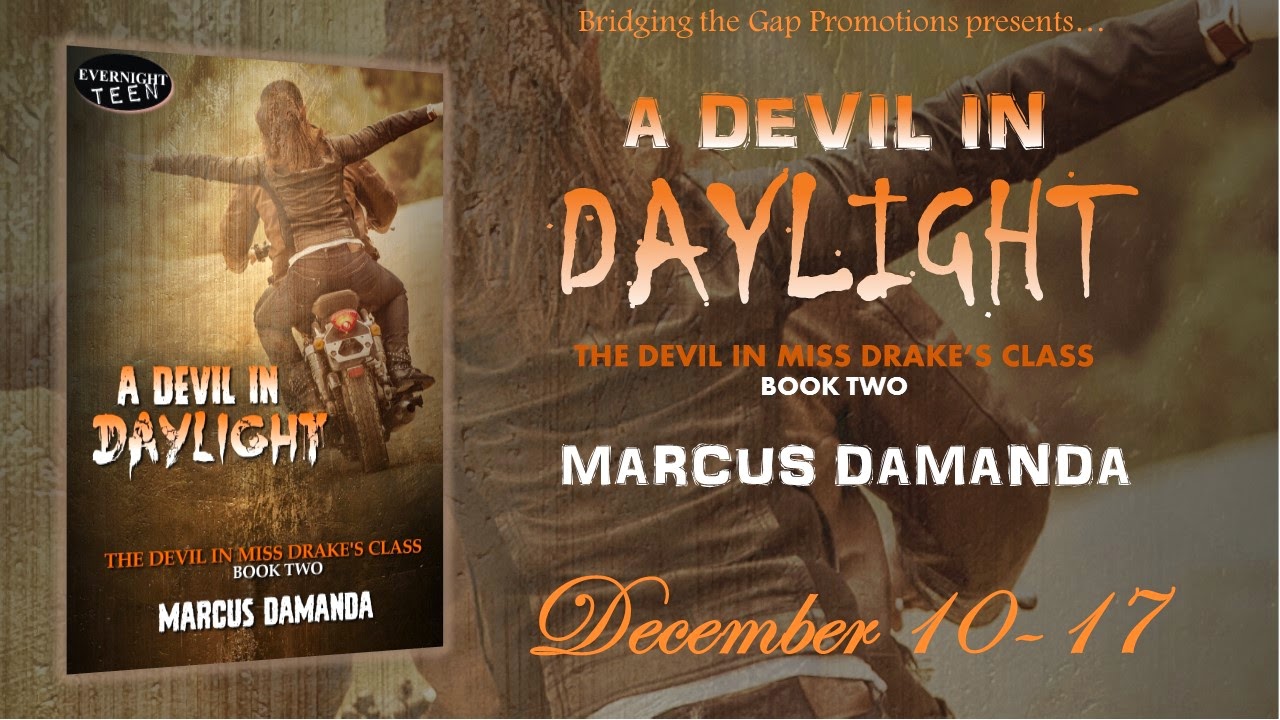 A Devil in Daylight
The Devil in Miss Drake’s Class, Book Two
By Marcus Damanda

$10 Evernight Teen Gift Card. Please use the RaffleCopter below to enter.

Crystal: Today I have the pleasure of asking Marcus Damanda a few questions. Welcome Marcus, I'm so happy to have you here today. Would you share a little bit about yourself with us today?

Marcus: Hi, Crystal! Thanks for having me back so soon.
It’s a busy time right now—but it’s all good. We’re in the last couple weeks at school before the holiday break, so my sixth graders are getting squirrely. And I’m the school spelling bee coordinator, which is this Friday. I just finished edits on Book 3 in this series, THE DEVIL AT PLAY. And then there’s this wonderful blog tour, the second in a couple weeks! Lots going on. It beats being bored.

Marcus: For A DEVIL IN DAYLIGHT, that’s really hard to pick. The whole thing is a gradual building of character tension and suspense. Audrey’s a much stronger character in this book. But I’m really proud of the material with the thousand ghosts, too. When they come for Heather Roberts, that may be my favorite. It’s really over-the-top and horrifying.

Marcus: A lot of the character stuff comes from being around kids all the time—not just my students, but my teenage nieces, too. The horror stuff, I have no idea. My brain just defaults to weird places, I guess.

Marcus: I’m about sixty pages into the third book in my FOREVER SHOW series. I really do love my vampires. I also have a prologue written for something else, a little something I hope to add to my author library at Evernight Teen, if I should be so fortunate.

Marcus: I try to do a page a day. I plot on note cards, then outline on a computer, then write what I can. Getting a single-spaced page in, once I’m up to that part of the process, is a minimum. If the spirit’s in full-throat, I go much longer—especially as the story nears its end.

Marcus: I interviewed my school nurse for this book. I’ve spent some time on Web MD, too. I had to research psychosis and depression quite a lot for all the books in this trilogy. Here’s an interesting tidbit I learned while researching black widow spiders for Book 3: their venom asphyxiates, and they release an enzyme to melt the insides of their prey.

Marcus: A few I didn’t mention in my other interviews that are worth recommending in the horror and thriller genre: Joe Lansdale, Mary Shelley, Michael Crichton. For teen fiction, whether mainstream or suspense, I grew up on Robert Cormier—THE CHOCOLATE WAR wielded a real influence over A DEVIL IN DAYLIGHT.

Marcus: Speaking of that prologue I finished, it’s in the dystopian future genre—a whole new thing for me. We’ll see if it happens!

“You will account for what you did to Audrey.”

After three months in the suicide prevention wing of St. George’s, Audrey Bales is finally coming home. Enrolled at a new school, she plans to reinvent herself with a new look, new friends, and a second chance to be just like everyone else. But the kids who drove her over the edge aren’t through with her yet.
And one of her new friends has an agenda all his own.

During the day, the halls of Battlefield High will echo with their screams.

“It will never stop.”

And at night, their screams will be silenced.

“Until one of you ends it.”

Blood welled up from her wrist, at first in bubbles and droplets, then in a line.

Ignore the pain. Block it out. Deny it, like it’s not even there.

And it wasn’t. Weird. This was supposed to hurt.

Her reflection in the computer screen showed black hair. And that, too, was weird. She hadn’t had black hair in months. Not since her first days in the hospital.

Nor was she supposed to be seeing him. She’d beaten him—banished him.

She had to saw to break the vein. A small, red jet squirted over her keyboard.

On the screen, Val—her one-time best friend—was reaching out to her. Audrey? Audrey, don’t be dumb. Come on.

Alex stopped talking, stopped coaching. From behind, he held on to her shoulders and squeezed.

She set down the knife in a puddle of her own blood, then picked up her cell phone and took a picture, even as her wrist squirted again.

She hooked the phone to a USB cable and to the computer. She posted the picture, unhooked it, and let it drop. It clattered off the side of the desk and onto the floor, but Audrey didn’t even notice.

She tried to put her chin in her right hand. She wanted to watch the responses. See what Val thought. See what Maggie thought.

Maggie, who had started all of this. Maggie, who had ruined Audrey’s life because she’d thought Audrey had been ogling her in the locker room at school. Spoiled, rich little Maggie Lassiter, with the angel earrings—it had been those Audrey had been staring at—and the countless followers that Maggie called her friends. But it hadn’t been enough. No, she had to steal Audrey’s friend, Valerie Mills. Her only friend….

Putting her chin in her hand didn’t quite work out. Her elbow slipped in the blood on her desk. She felt her face hit the hard wooden corner of the desk on her way to the floor. 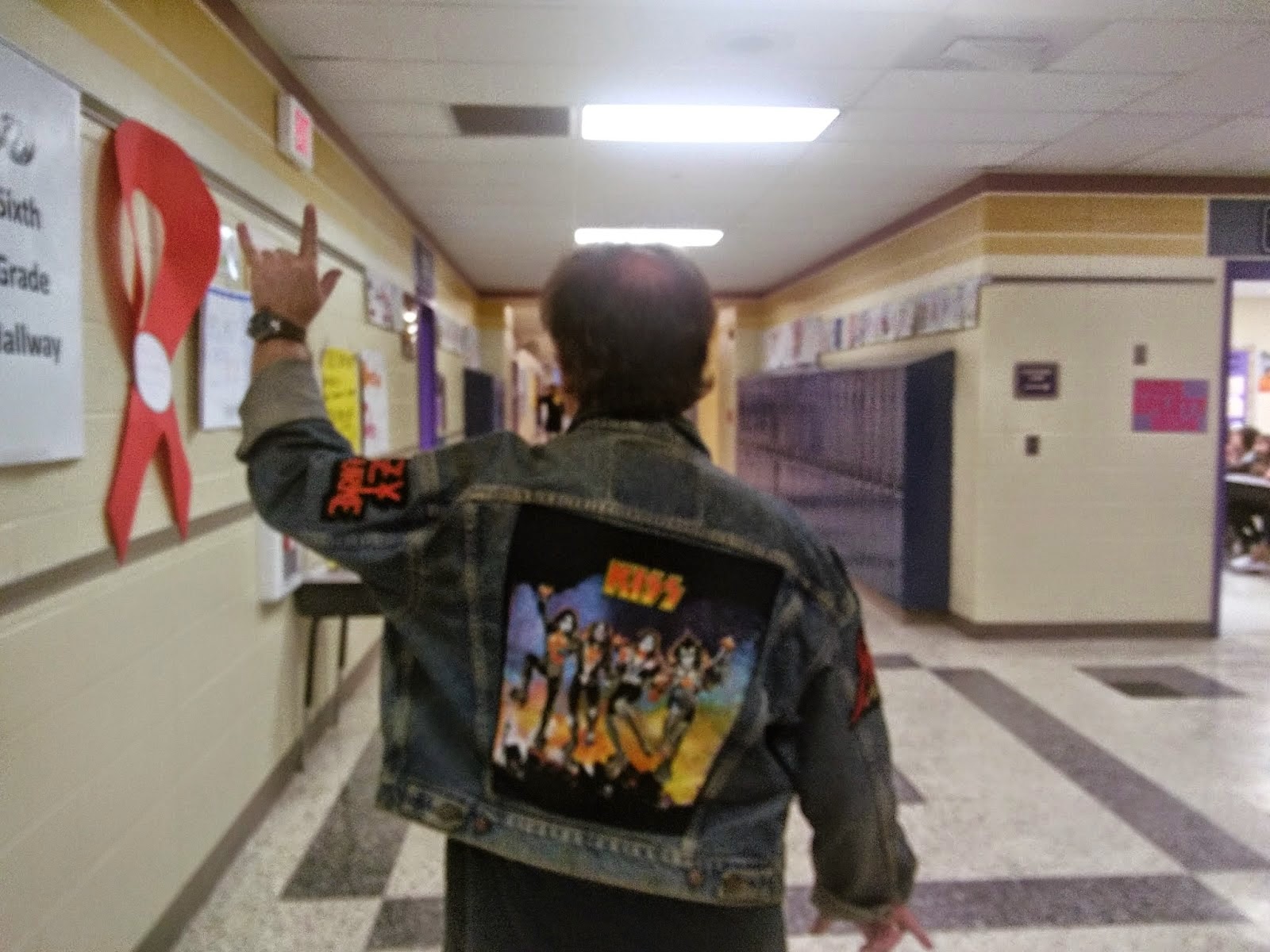 Marcus Damanda lives in Woodbridge, Virginia with his cat, Shazam. At various times throughout his life, he played bass guitar for the garage heavy metal band

Mother’s Day, wrote for The Dale City Messenger, and published editorials in The Potomac News and The Freelance Star. Currently, while not plotting his next foray into fictitious suburban mayhem, he spoils his nieces and nephews and teaches middle school English.

Posted by Reviews By Crystal at 11:43 AM