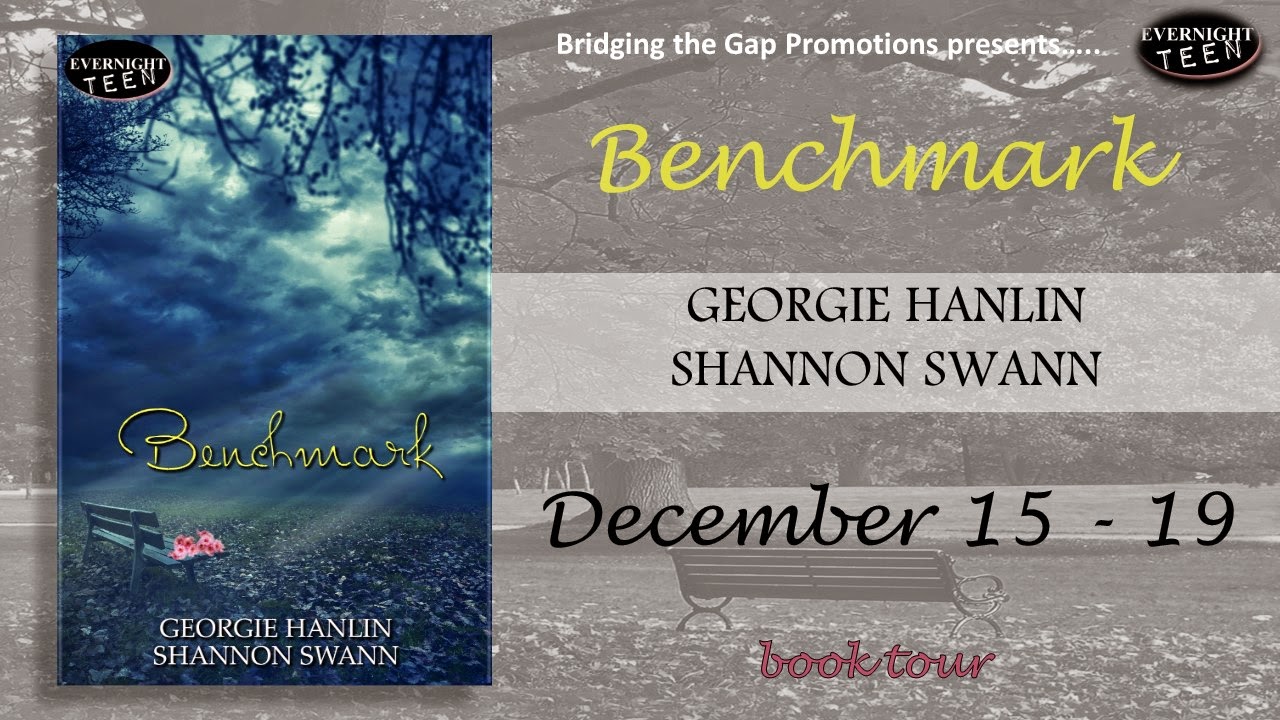 
Giveaway: $20 Amazon Gift Card- Please use the RaffleCopter below to enter.

Crystal: Today I have the chance to ask Georgie Hanlin and Shannon Swann a few questions. Welcome both of you, I'm so happy to have you here! Would you share a little bit about yourself with us today?

SHANNON: I was born in Hawaii but grew up in New Jersey from the age of 6.  Since then I’ve lived in several major cities including San Francisco, New York, Boston and now Chicago, mostly working in the fashion industry.  I love to travel!  London is my favorite city and I was just there this past summer.  I can’t wait to go back!  I have two adorable dogs (schnauzer/papillon mixes) named Moose and Auggie.  They are the lights of my life and I cannot possibly love them more than I already do!

Georgie: I am really excited that BENCHMARK has been released; its story is very close to my heart. I have a little boy who keeps me on my toes and a not so little cat who keeps me company while I write after everyone else is all tucked in for the night. Both my son and my cat are fiercely loyal companions for whom I am most grateful.

SHANNON- I love when Harper finally confronts Piper and sticks up for herself.  You can see then the progress she has made in standing up for herself!

Georgie: I have many favorite scenes, but if I had to choose one, I'd say it's the time capsule scene. I love how the friends recounted their favorite memories with Braydon and subsequently made them be a part of camp forever by burying them in the ground by Braydon's bench. I thought that scene was a particularly healing and sweet part of the story.

Georgie: I was a ritualistic morning jogger when I lived in Washington State a few years ago. I had gone to summer camp in the San Juan Islands as a child and living in the Pacific Northwest brought back so many of those childhood memories. I had lost a dear friend to suicide some years before and on my runs, my mind would wander from camp to my friend; a strange dichotomy, I know. So, on one of those runs, I thought about writing a story about a girl working through the aftermath of suicide set in the Pacific Northwest. Shannon, who has wonderful ideas, is a great writer and shares the same passion for the message our book shares, and I joined forces and BENCHMARK was born.

SHANNON:  There are a couple of projects that I’ve been working on!  Stay tuned!

Georgie: I'm always brainstorming and have a few story ideas that I have in mind and am beginning stages development.

SHANNON:  No, I’m an in the moment kind of writer!

Georgie: I need it to be very quiet when I write...but I always welcome the sound of rain. Oh and chocolate nearby is a must!


Crystal: Did you have to do a lot of research for this book or any other? If so do you have a fascinating fact that you have learned you would like to share with us?

We really wrote with our memories and our hearts.

SHANNON- You can’t go wrong with the classics.  Charlotte Bronte is one of my favorites.

SHANNON- I have some ideas for a Dystopian novel!

Georgie: I really enjoy writing realistic stories with some elements of fantasy.

Harper Kingsley has the perfect life until her brother, Braydon, commits suicide.  After his death, Harper returns to North Star, a sailing camp on Whidbey Island where she and Braydon spent eight summers together.  Joining her are her three best friends who are ready to rule Senior Hill. Harper just wants to escape to the only place she feels is truly magical.

At North Star, Harper tries to forget her reality, but it’s impossible because she comes face-to-face with her brother at a hidden bench in the garden.  Is it really him or just her imagination?  She knows Braydon is dead. Why is appearing in front of her? Scared at first, Harper rejects his presence, but once he explains that she is the one who brought him back, she wants to hear him out.

Harper chooses to keep these encounters to herself. Who would believe her anyway?  It’s Jeremy Miller, the camp’s ultimate heartthrob and Piper’s ex, to whom she will eventually reveal her secret. And he has a secret of his own.  Their camp romance turns Harper’s friends against her, giving her one more thing to juggle this summer at North Star.

“Seriously, Harp,” she began, “if you and Jeremy like each other, you should just be honest about it.” It was obvious to me that the three of them had been talking about this behind my back.

“That’s not even the point, Anna,” I barked defensively.  “We don’t, I mean, I… he… look, Jeremy’s a nice guy and he was friends with my brother.” I felt short of breath trying to explain myself.  “But that’s all irrelevant. The point is: everything in this world can’t always be about Piper.  At school, at camp, wherever we are, it’s always about Piper and her boyfriends or her exes or her soccer or her clothes or her life or whatever. I am so tired of her.” Those were my honest feelings right at that moment, but deep, deep down, I knew I was just jealous of her uninterrupted life.

“Look, I know you’ve gone through a lot, this year Harp,” she whispered sympathetically, undoubtedly trying to calm me down before we started to draw a bigger crowd.

There was the pity. I hated being pitied.  I could feel my eyes start to well up so I began to blink frantically to stop tears from falling down my face. I was so sick of crying.

“Thanks anyway, Anna, but you actually have no idea.” Anna had been nothing but a friend to me, and I knew my words had hurt her. “One year ago, my life was normal. It was happy and calm and predictable.  I was up here having fun with my brother and you guys, loving it all, probably just like you are this summer.  But, for me, it’s different now. Everything’s different. And it won’t ever be the same again.” I was barely able to finish my sentence, but I could see through my teary eyes that Anna looked uncomfortable, like she didn’t know what to do with me.  We had inched our way from the center to the edge of the art shed, far enough from other people’s earshot, but close enough for anyone paying attention to clue in on all the drama.  I had to get out of there. People were starting to stare.

Georgie Hanlin
Georgie Hanlin grew up in San Francisco. She has a Bachelor’s degree from Scripps College in French and History and spent her Junior Year abroad studying in Paris. Georgie has Master of Arts degree in Education from Teachers College, Columbia University.  Her writing has been featured in The New York Times/International Herald Tribune, The Washington Post, The Christian Science Monitor, The San Francisco Chronicle and NPR.  Georgie is a teacher in Mill Valley and lives in San Francisco.

Shannon Swann
Shannon Swann was born in Honolulu, but moved to New Jersey as a child. She has a Bachelor’s degree from California State University, San Francisco in Liberal Studies with an emphasis on Speech Communication. For close to a decade, she worked in the fashion industry for some of most well-known retail giants (GAP, Coach, Reebok) in San Francisco, New York and Boston doing Product Development. She currently owns her own small business, MooseCouture, and resides in Chicago where she is an avid animal rights supporter (PAWS Chicago).

Posted by Reviews By Crystal at 11:28 PM