Award Winning and fan favorite author, Lizzy Ford, introduces us to a new time travel romance, with WEST, which Outlander fans are sure to love. 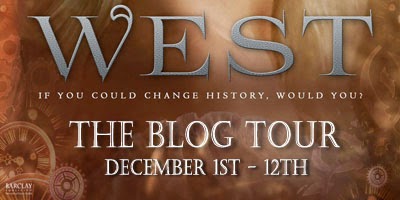 If you could change history, would you? WEST is the first installment in a series of standalone novels in the History Interrupted series featuring four women sent back to different time periods to modify historical events. Fans of Diana Gabaldon's OUTLANDER series will cherish this new series from Bestselling Author Lizzy Ford! Look for EAST, NORTH, AND SOUTH  in 2015!

If you could change history, would you?
College graduate Josephine “Josie” Jackson answers ‘yes’ to the question on a survey while visiting an Old West tourist trap. The next morning, she wakes up in Indian Territory in the 1840s, where she’s given a mission to complete before she can return to her time: to reset history by finding and stopping the man responsible for a horrific massacre.
It seems easy enough, until she discovers that three other women have been sent back to the same time period. When Josie uncovers what happened to them, she realizes the chances of her getting out of the past alive are not good.

To survive, she’ll have to trust the very man she’s there to stop, someone who has every reason to distrust her and only one reason to help her - to prove he’s not the monster she claims he’ll become.

Lizzy Ford is the author of over thirty books written for young adult and  adult romance readers, to include the internationally bestselling “Rhyn Trilogy,” “Witchling Series” and the “War of Gods” series. Lizzy has focused on keeping her readers happy by producing brilliant, gritty romances that remind people why true love is a trial worth enduring. Lizzy’s books can be found on every major ereader library, to include: Amazon, Barnes and Noble, iBooks, Kobo, Sony and Smashwords. She lives in southern Arizona with her husband, three dogs and a cat.
Website | Facebook | Twitter | Goodreads | Google Plus