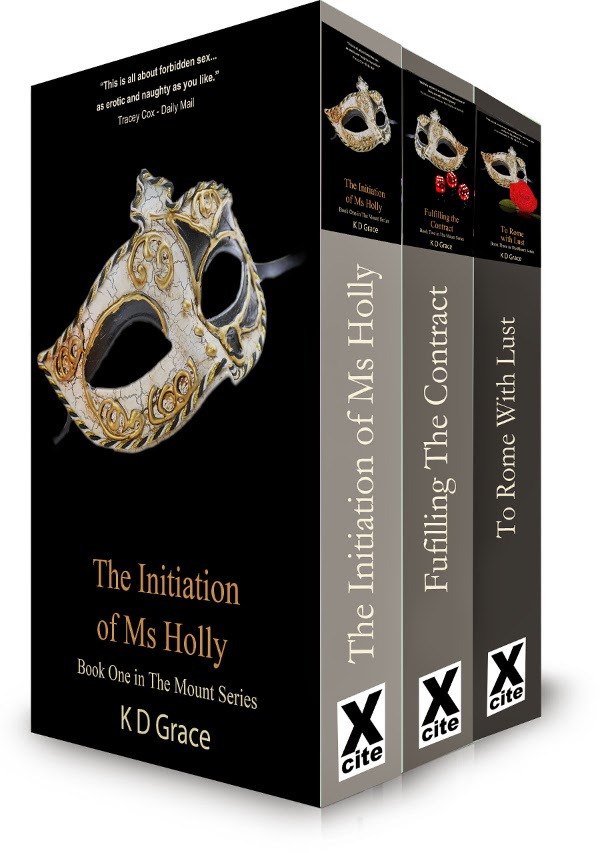 Rita Holly’s sexy initiation; the strange contract Nick Chase fulfills for Elsa Crane; Liza Calendar and Paulo Delacour’s formulation of an exclusive perfume derive from the scent of sex – the cult of The Mount is behind them all. Shrouded in mystery and grounded in sexual exploration, The Mount is world-wide and ancient, its existence known only to its members who keep its secrets from generation to generation. Together for the first time in one volume, the accounts of The Mount in London, Las Vegas and Rome -- three novels, three wild romps of lust, sexual largesse and love.

‘Surely you can give Tanya one more chance,’ Nick said. ‘And really, it was my fault. I’d had a bad day and I wasn’t on my best behaviour.’
Elsa tossed the headset back onto the dressing table and rubbed the back of her neck. ‘Mr Chase, unless you want to fulfil Tanya’s contract for her, this conversation is over. It’s been a long day, and I’ve had enough. Pagan will escort the two of you back downstairs and since Tanya no longer works for me, I don’t care if you fuck her brains out. Now if you’d –’
‘Alright,’ Nick interrupted. ‘I will.’
Suddenly all eyes were on him. ‘Tell me what to do and I’ll fulfil the contract for her.
After all, it’s my fault she’s in breach.’
Tanya gave a little yelp that sounded like a kitten in distress and Elsa laughed out loud. ‘Mr Chase, you don’t even know what Tanya’s contract involves.’
‘I assume it has something to do with what’s going on in room 2031. It’s not prostitution is it?’
‘No! No, is not prostitution,’ Tanya said, the excitement nearly vibration through her voice. ‘Is nothing like that.’
‘Well actually it’s something like that,’ Elsa corrected. ‘My people get paid for sex.’
‘I don’t understand,’ Nick said.’
She nodded him over to one of the scopes set up at the bedroom window. When he balked, she nodded again. ‘Go ahead; check out what’s going on in room 2031.’
Nick nearly knocked the scope out of focus at his first view of the naked ass of a man pistoning his cock into a woman bent over a big bed. Her head was buried between the legs of another woman, who was pinching her own nipples for all she was worth and writhing beneath the serious tongue action.
‘Then they are prostitutes.’ Nick’s voice was suddenly a whisper, as though he feared he might disturb the people he viewed through the scope.
‘No.’ Elsa leaned close to him as though she could see over his shoulder. ‘They all work for me, and they get paid a lot of money to have sex with each other while someone else watches.’
With difficulty, Nick took his eyes off what was going on in the scope. He suddenly felt dizzy. ‘Let me get this straight, these people –’ he nodded around the room ‘– All of these people and those –’ he pointed to the scope ‘—have sex with each other and people pay money to watch.’
Elsa nodded ‘A lot of money.’
‘And that’s what Tanya was doing? That’s what the contract’s about, having sex and letting people watch?’
‘That’s what the contract’s about,’ Elsa said. With a smirk, she pulled Tanya’s red panties out of Nick’s pocket where he’d forgotten he’d stuffed after he’d picked them up from the parking lot at the Mango. She handed them back to Tanya and replaced them with a black business card, briskly patting his pocket as she did so. ‘I know how much you loath your job, Mr Chase, and I can almost guarantee you’d find what Tanya does a lot more satisfying. But –’ she ran a hand down and gave his crotch a quick grope ‘– It takes some serious balls.’
He elbowed her away and shoved past Tanya and Pagan. ‘You people are all crazy if you think I would … if you think I might …’
Elsa offered him a smile that he felt, much to his discomfort, right down between his legs. Then she lifted an eyebrow and gave a shrug that made the dark gloss of her hair shimmer in the subdued lighting. ‘You asked.’

“The Initiation of Ms. Holly is so hot I am still tingling a day after I finished reading this novel. This spicy number will heat you up and keep you fully charged for days to come.” – Coffee Time Romance

When she’s not writing, K D is veg gardening. When she’s not gardening, she’s walking. She walks her stories, and she’s serious about it. She and her husband have walked Coast to Coast across England, along with several other long-distance routes. For her, inspiration is directly proportionate to how quickly she wears out a pair of walking boots. She also enjoys martial arts, reading, watching the birds and anything that gets her outdoors.

K D Grace also writes hot romance as Grace Marshall. An Executive Decision, Identity Crisis and The Exhibition are all available. Interviewing Wade, a follow up novel to the trilogy, is coming soon.