The Coin By MARIA ELENA ALONSO-SIERRA ~ LIMITED TIME ONLY $.99!! 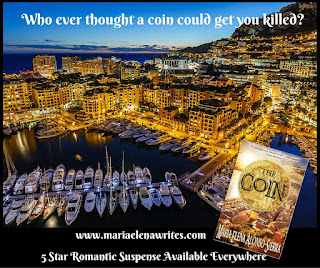 ON SALE FOR A LIMITED TIME FOR ONLY $.99!!
Hurry grab it soon this is a limited time only! 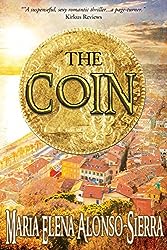 France, 1993. WHO EVER THOUGHT A COIN COULD GET YOU KILLED? A cunning killer trusted his secret was safe, an innocent woman holds the key to his destruction, and an intelligence officer must keep her alive before the madman can strike the fatal blow.
A DANGEROUS FIND For artist Gabriela Martinez, life has become complicated: she suspects her mentor and friend wants her as his mistress, her husband is neglecting her, and her latest illustration is ruined. Seeking peace, she visits her favorite thinking spot in La Marbriére, the mountain overlooking her home in the Côte d’Azur. Distracted, she winds up in an unfamiliar clearing, where she discovers a 1945 French coin half-buried in the ground. Delighted with its beauty, she has it set on her favorite bracelet.
TREACHEROUS KNOWLEDGE Richard Harrison, an American intelligence officer, is livid. A simple favor for his boss has turned his vacation in the French Riviera into a hellish assignment. Now, not only does he learn the truth about the coin, but he must also protect Gabriela from a cunning killer who will stop at nothing.
TIME IS RUNNING OUT Together with Maurice Nôret, from French intelligence, Richard attempts to discover the madman’s identity, except his budding love for this beautiful artist is turning into a dangerous handicap. Every one of his moves is thwarted with brutal countermoves. Soon, the psychological games to terrorize Gabriela escalate beyond his control. If Richard doesn’t find a solution, it may be too late for them both.
Set in the exotic French Riviera, The Coin is a story of hatred, betrayal, love and duty—of terrible and painful choices that, nonetheless, bring about personal triumph. 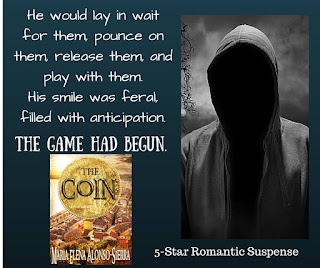 Maria Elena Alonso-Sierra is a romantic suspense author with a unique point of view. Her adventure novels take place in locales across Europe and the United States, reflecting her international upbringing and extensive time as a global traveler. In her duology, The Coin and The Book of Hours, her characters, Gabriela and Richard, walk the same paths as their creator, though her life was never in so much danger.

Ms. Alonso-Sierra’s writing career began circa age thirteen with a very juvenile science fiction short story, but the writing bug hit, and she has been writing, in one capacity or another, ever since. She has worked as a professional dancer, singer, journalist, and literature teacher (and not necessarily in that order—she likes variety) and holds a Masters in English literature. She loves to hear from readers and, when not writing, roams around to discover new places to set her novels.

Ms. Alonso-Sierra is currently working on her third novel, and lives in North Carolina with her husband and her dog, Amber.