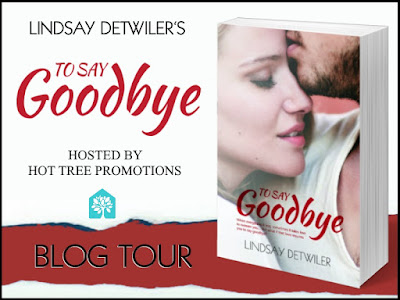 To Say Goodbye
By  Lindsay Detwiler

Feisty Sophia never shies away from life. Playful, romantic, connected—her marriage was the thing of fairy tales. But when tragedy strikes, Sophia is left to pick up the pieces of her life.

After leaving the army, Jackson is ready to start afresh. But when he returns home, his life spirals out of control.

As Sophia and Jackson find themselves in each other, they start to see redemption is possible. Trying to piece together a new life, they must answer the question:  Should they forge a life together and say goodbye to their pasts completely, or should they loyally go their separate ways to avoid heartache? 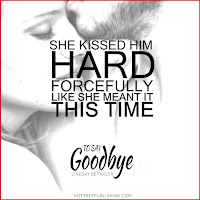 iTunes I Nook I Are

She didn’t know if she would be able to cry
today. She’d cried so many tears over the past few nights, she thought she
might be empty. Then again, she also didn’t know if she’d make it through today
standing. She wondered if—in fact, she hoped—she would fall to the ground, a
heart attack panging in her chest from her grief. She wanted to lie in the gaping
hole in the ground and bury herself beneath him.
She, quite simply, wanted to be dead too.
She could feel the gazes penetrating her,
pitying her, gauging her reaction. She tried to look the prim and proper part
of the solemn wife, flanked by her parents and in-laws, standing close to the
casket. Inside though, something else was creeping in, something besides the
skulking, downtrodden feelings.
Moments of rage began to infiltrate her, a
silent warfare bubbling within.
How could this have happened to her? These
sort of things didn’t happen to women like her. Sure, like everyone, she’d
experienced tragedy before. Grief had grasped her with its suffocating grip
several times in her adult life, but this was a completely new level. He wasn’t
here this time.       She couldn’t lean on his shoulder, feel him wrap his arms
around her, have him drag her out of the pit of sadness. She’d never been
through something like this without him. She’d never endured a shredded heart
without him there to help piece it back together. She wasn’t equipped for an
ordeal like this, wasn’t strong enough.

An high school English teacher, an author, and a fan of anything pink and/or glittery, Lindsay's the English teacher cliché; she love cats, reading, Shakespeare, and Poe.

She currently lives in her hometown with her husband, Chad (her junior high sweetheart); their cats, Arya, Amelia, Alice, and Bob; and their Mastiff, Henry.

Lindsay's goal with her writing is to show the power of love and the beauty of life while also instilling a true sense of realism in her work. Some reviewers have noted that her books are not the “typical romance.” With her novels coming from a place of honesty, Lindsay examines the difficult questions, looks at the tough emotions, and paints the pictures that are sometimes difficult to look at. She wants her fiction to resonate with readers as realistic, poetic, and powerful. Lindsay wants women readers to be able to say, “I see myself in that novel.” She wants to speak to the modern woman’s experience while also bringing a twist of something new and exciting. Her aim is for readers to say, “That could happen,” or “I feel like the characters are real.” That’s how she knows she's done her job.

Lindsay's hope is that by becoming a published author, she can inspire some of her students and other aspiring writers to pursue their own passions. She wants them to see that any dream can be attained and publishing a novel isn’t out of the realm of possibility.