#Interview - When a Marquess Loves a Woman by Vivienne Lorret 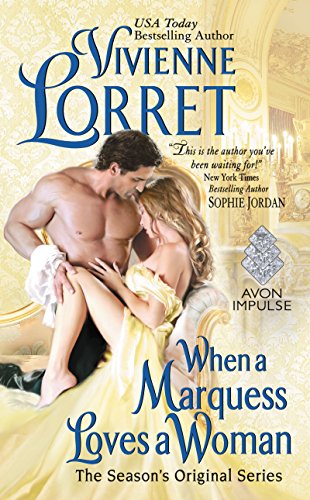 Crystal: I am so excited to host Vivienne Lorret today. Welcome Vivienne! Would you share a little bit about yourself with us today?

That introduction sounds like I’m standing in front of a romance support group, announcing my addiction, doesn’t it? But maybe it’s true. I am addicted to romance.
It started when I was young, listening to fairy tales (aka “gateway” romance). Then it continued when, years later, I discovered Jude Deveraux, Judith McNaught, and Nora Roberts. I’m happy to say that I haven’t been able to manage my romance addiction at all. In fact, it just keeps getting more intense.

And since I’m here, I might as well confess my other addiction: chai tea. I drink a cup every morning and, more times than not, I find myself standing in line at Starbucks ordering a grande chai with whip in the afternoon.

So that’s me in a nutshell—a romance writer fueled by copious amounts of chai tea.

Vivienne: Right now, I’m working on a proposal for a late-Regency series set in London with an entirely new cast of characters. So far, it’s a lot of fun!

Vivienne: The idea for WHEN A MARQUESS LOVES A WOMAN began while I was writing “The Duke’s Christmas Wish,” the prequel to the series. I first met Max and Juliet in the pages of that novella.

They had instant chemistry, bringing out the worst in each other, and a past scandal that kept the ton’s ever-watchful gaze trained on them. I wanted to know more about them and why there was still so much animosity (especially on Max’s side) between them. That’s when I found out that, unbeknownst to Juliet, Max had always loved her, but he would never forgive her for breaking his heart.

I couldn’t wait to write their story!

And I’m so thankful for the support from Avon, and from my readers, that blessed me with the opportunity to do so.

Vivienne: Cheez-it. Just typing the word makes my mouth water. However, because Cheez-its are my favorite snack to munch on, I’ve stopped buying them. I’ll walk past them in the grocery store and pretend that I didn’t see their cheerful, grinning boxes occupying four shelves. Yeah,four. Sadly, they keep coming out with different tempting varieties.

I hate it when they go on sale because then it feels like I’m doing a disservice to my budget, the universe, and all of humanity by notbuying them. I mean, it’s a sale, right? “Cheez-its at a 2 for $4 deal? Imagine all the people that could feed.”  But then my mocking inner voice will offer a dose of truth serum, laugh and say, “One.”

Vivienne: After hinting at Max and Juliet’s chemistry in two previous books, as well as a novella, I was dying to lay it out on the page. So, one of my favorite scenes is the cake-feeding in Chapter 2.

He spread his arms out in a shrug, cakes in one hand, walking stick in the other. “Now, as you can see, I am utterly helpless”—he paused at the sound of her scoff—“and unable to taste the cake that you offered to feed me.”
“I made no such offer.”
“Then I cannot think of what I heard moments ago unless . . .”—he lowered his voice—“you were flirting with me. But you, the ever-composed Lady Granworth, would never do such a thing.”
He wanted to see her color rise, her ire flash, anything. Damn it all, he needed to ruffle her feathers and crawl under her skin. It was the least she owed him.
“I would not even know how to flirt,” she boldly lied and without batting an eye.
Wasn’t every nuance of flirtation woven into her being? Every downward sweep of her lashes. Every subtle curl of her lips. Every slash of her tongue. Every single breath!
“Oh, I’m certain that is a false statement,” he said, keeping his tone smooth and even. “All you have to do is admit to flirting with me, and I’ll be on my way.”
“I. Admit. Nothing.”
He held out his hand. “Then feed me a cake.”
She stepped forward so suddenly she nearly startled him in the process. “Fine.”
The crisply enunciated word tolled a warning bell within him, advising caution. He had anticipated their continued banter and even her eventual retreat, but not her acquiescence. Instinct told him to be wary. And yet curiosity fixed him to the spot.
Lifting her hand, she slipped the serviette into her delicate palm, the edges draping over fingers. He stared, paying close attention to every movement, noting how her lace mitts left the entire length of her slender fingers exposed. No doubt, like her dress, they were designed for a purpose, bringing to mind thoughts of bared limbs.
Then, with a delicate pinch of her thumb and forefinger, she picked up the first cake.
Anticipation thundered in his chest, neck, and ears simultaneously. She could still balk. Still storm off in a flurry. He was prepared for such a response but no longer assured of it. Perhaps challenging her wasn’t the best idea after all.
His gaze shifted from the cake to her eyes, over and again. Her gaze, on the other hand, remained fixed to his as she slowly lifted the cake—
And popped it into her mouth. Then she closed her eyes, a smile curving her lips, while emitting a low murmur of sensual delight.
Max couldn’t breathe, couldn’t think, couldn’t move if someone were to set him on fire. The pulse that had pounded so hard an instant ago abruptly dropped to his trousers, banging like a drum as blood engorged his flesh.
The tip of her pert tongue slipped out to tease him further. The taunt transformed into torture when she licked the pink icing from her fingertip and then her thumb. When she finished, her eyes opened, the blue a brighter, deeper hue than the sky overhead. He found himself unable to look away.
“Delicious,” she purred. “So good in fact that I think I’ll have another.”
She pinched the second cake, her lips parted. But before she could lift it to her mouth—before he knew what he was doing—he seized her wrist.
He was half-tempted, half-wild with the need to kiss her, to lose himself in the silken texture of her lips once more. To haul her into his arms and feel the curves of her body with his hands.
It took every shred of control he possessed not to give in. At least, not completely.
Watching her all the while, he lowered his head and took the cake into his mouth.
He swallowed it without fanfare or appreciation. The dessert he really wanted was still waiting.
He slipped her finger into his mouth next, the dainty pad at the tip more silken and sweet than marzipan. In slow, searching swipes, he laved her flesh, mapping the route of every fine impression, wicking away every last bit of icing. He would have stopped if he was frightening her. Hell, he was startled by his own actions. But when he saw her pupils dilate, her gaze drifting down to his mouth, and then heard the quickening of her breath, he knew she was not afraid of him.
She was one of two things—either wholly, explosively angry or . . . wholly, explosively aroused. And since he’d been the recipient of her temper before, he wagered it was the latter.
A surge of triumph merged with the unleashed desire coursing through him. She could pretend she was cool-headed and aloof all she wanted, but he knew better. Five years ago, that same passion had slipped through the cracks in her composure.
He wanted more. Greedy, he curled his tongue around her, drawing her flesh deeper, and gently grazing the delicate furrows of her knuckle with his teeth.
“Max.”
His name shuddered out of her lungs and past her lips, sending a tremor through him. Yet the tinge of vulnerability in her passion-laden plea swiftly brought him to his senses.
With a quick tug, he pulled her closer. Still holding his walking stick, he touched the handle beneath her chin and tilted it up. “Perhaps you should reconsider flirting with your enemy in the future.”

Vivienne: You are so sweet! I have varied hobbies, from crocheting to taking photographs. Sometimes, I’ll drive through the country, listen to music, and look out the window for the perfect place to pull over, point and click. Living in the Midwest, not too far from Lake Michigan, cornfields, and vineyards, there are a number of breathtaking sights.

I’m also a stress-baker. When life gets hectic and I just need a minute to collect myself (before I run mad through the neighborhood), I lock and load the beaters and bake.

But I can tell you one thing; it’s a relief that I don’t know the recipe for Cheez-its.

Vivienne: I’m a no noise kinda gal. But if I have to drown out the sound of the neighbor’s dogs, I’ll either turn on a fan or listen to R&B.

Vivienne: Thank you so much for having me here!

If you’d like updates on my latest projects or upcoming book signings, please sign up for my newsletter @ www.vivlorret.net

As a young, penniless gentleman, Maxwell Harwick knew he had little to offer Juliet White—the most beautiful debutante of the season—except his love, and one thoroughly scandalous kiss. But when they were discovered in a compromising position, a nearly ruined Juliet fled into the arms of a rich, older lord... taking Max’s heart with her.
Now a widow, Lady Juliet Granworth intends to use the fortune she inherited from her odious husband to build a new life in London. Five years have passed, but she’s never forgotten Max… or his soul-searing kiss. Yet it’s clear the newly-minted Marquess of Thayne has not forgiven her—after all, the infuriating man can barely stand the sight of her. But Juliet has endured far too much to give up without a fight and if it’s a battle of wills he wants, it’s a battle he’ll get.
He hates her for breaking his heart. She detests him for destroying her future. But beneath all the loathing simmers an intoxicating passion that neither can ignore… and the harder they resist, the harder they will inevitably fall.

**Note from Crystal: This book is on my to be read soon list. Please stay tuned for my review :)
Posted by Reviews By Crystal at 1:19 AM

Email ThisBlogThis!Share to TwitterShare to FacebookShare to Pinterest
Labels: @VivLorret