The authors will be awarding digital copies of all three books on tour to a randomly drawn winner via rafflecopter during the tour. Use the Rafflecopter below to enter. You may increase your chances of winning by visiting the other tour stops. You may find those locations here.

What makes a man?

The wild and dissolute Viscount Ravenswood lives only for his own pleasure, caring not one wit for the broken hearts left trampled in his wake. But his decadent lifestyle finally catches up to him in a fatal carriage race. It’s an infamous and spectacular end to a brief, immoral life—or is it?

And who is the woman who loves him? When Glenna Parker stumbles upon her c

ousin Reed Parker’s cluttered laboratory, she could never have imagined the mad experiment he is about to embark upon—to bring a man back from the dead. Not just any man, but Ravenswood, who once shattered her heart. With no memory of his former life, Glenna calls him Luke, and finds herself enchanted by his compassion—and passion. Protecting the scarred Luke has become Glenna’s sole mission, but can she protect her heart from her beloved monster?

Gulping deeply, she stood next to Ravenswood. The eyes appeared   to be as glassy as they did before. However, something was different. They weren’t blue as a summer sky any longer. Instead, they contained nearly all colors of the spectrum, as if the irises had exploded. “Like a kaleidoscope,” she said with wonder.

Thunder still rumbled outside, and heavy rain lashed against the house, the storm one of the more vicious ones she’d witnessed. Without any warning, lightning struck the rod once again, sending another wave of current through the viscount’s lifeless body. This time, the blast nearly lifted him off the table. Reed sprung into action, giving the generator handle another downward thrust. The amount of power running through the corpse lay beyond her imagination. Black burns were noticeable where the wires were attached. Again, visible energy passed through the metal plate on Ravenswood’s head.

Reed stepped back and waited for the body to stop twitching. Sparks caught and flame leapt from some of the wires, spreading to the canvas covering the body. Reed calmly snuffed out the blaze with a piece of fabric.

Glenna felt sick. Physically and morally sick at heart. “Enough. No more. The body will catch fire if you keep this up. It did not work….”

She glanced at Ravenswood, and he stared back at her, his eyes firmly focused on her face. Try as she might, she could not stop the scream from escaping her throat. 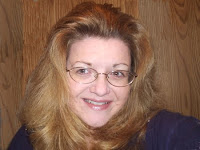 Karyn Gerrard lives in a small town in the western corner of Ontario, Canada. She whiles away her spare time writing and reading romance while drinking copious amounts of Earl Grey tea. A multi-published author with a few best sellers under her belt, Karyn loves to write historicals, particularly ones set in the Victorian era. Tortured heroes are a must. She also writes the occasional contemporary.

As long as she can avoid being hit by a runaway moose in her wilderness paradise she assumes everything is golden. Karyn’s been happily married for a long time to her own hero. His encouragement keeps her moving forward. Visit the author at www.karyngerrard.com, find her on Facebook, and follow her on Twitter.