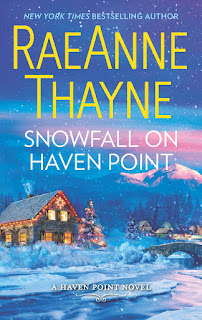 Come celebrate the festive season with the authority on contemporary holiday romance, New York Times and USA TODAY bestselling author RaeAnne Thayne, who returns with another chapter in the trials and tribulations of small town life in SNOWFALL ON HAVEN POINT (HQN Books, October 2016, $7.99 U.S./$9.99 CAN.). Set beneath the rugged Idaho mountainside in a magical lakeside town where even the most damaged of souls may find comfort, SNOWFALL ON HAVEN POINT is the latest installment in Thayne’s popular Haven Point series.

Andrea Montgomery—graphic artist and widowed mother to two beautiful young children—is still acclimating to peaceful Haven Point after surviving the most tumultuous time of her life, a period that included not only the death of her beloved husband—a Portland police officer—but also an awful physical assault inflicted on her by an obsessive stalker whose pursuit of Andie eventually culminated in a terrifying shootout with the Haven Point police.

Now, for the first time in a year, Andie is finally starting to feel safe. She and her fragile kids are even looking forward to their first Haven Point Christmas—one that thankfully doesn’t include any more big, scary men around to frighten them. But then Andie is asked to look after a neighbor—a friend’s brother— who recently broke his leg.  Unfortunately, that neighbor just happens to be County Sheriff Marshall Bailey—the most intimidating and foul tempered man in town.

Sheriff Marshall Bailey is used to being in control of every facet of his life. Single and devoted only to his career, Marshall is investigating a significant amount of missing funds from the Haven Point police department when he is suddenly mowed down by an anonymous hit-and-run driver in an isolated snowy parking lot one night, leaving him with a shattered leg but lucky to be alive. Aware that his attacker is likely someone close to him, Marshall just wants to be left alone to heal and to get to the bottom of this case without any distractions….

However, when Andie appears on his doorstep the next day offering her aid, with two precocious kids in tow, Marshall is unappreciatively taken aback. Rudely independent, the last thing Marshall wants is anyone making him feel like a pity project, especially someone who dislikes him as much as Andie obviously does.

Although initially turned off by Marshall’s unapologetic masculinity, Andie soon finds herself warming to the decent, caring man beneath the gruff exterior, an individual to whom her tentative children quickly become attached. But no matter how attracted she begins to find him, Andie knows that Marshall is offlimits as far as she’s concerned. This widow has vowed never to get involved with a policeman again.

Marshall also knows Andie needs someone far more family-oriented and less set in his stubborn ways than him. But for the first time in his life, he can actually envision a life beyond the job….

But when Marshall’s life is threatened by a dangerous assailant, Andie finds herself at a crux—caught between choosing the safe, comfortable world she’s been building around herself since the assault or fighting for Marshall and a possibility of a life together.

New York Times and USA TODAY bestselling author RaeAnne Thayne loves words. Her love affair started as soon as she learned to read, when she used to devour anything she could get her hands on: cereal boxes, encyclopedias, the phone book, you name it! She loves the way words sound, the way they look on the page and the amazing way they can be jumbled together in so many combinations to tell a story.

Her love of reading and writing those words led her to a fifteen-year career in journalism as a newspaper reporter and editor.

Through it all, she dreamed of writing the kind of stories she loved best. She sold her first book in 1995 and since then she’s published more than 40 titles. Her books have won many honors, including three RITA® Award nominations from the Romance Writers of America and a Career Achievement Award from RT Book Reviews.

RaeAnne finds inspiration in the rugged northern Utah mountains where she lives with her hero of a husband and their children. She loves to hear from readers and can be reached through her website at www.raeannethayne.com.
Posted by Reviews By Crystal at 12:30 AM