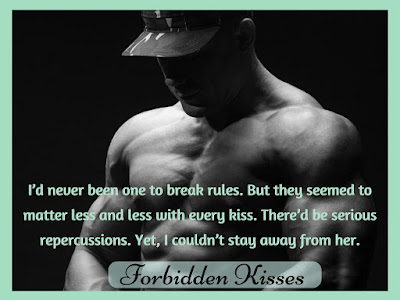 A sexy Navy pilot. A beautiful Navy instructor. A relationship prohibited by military regulations. Will they end their sizzling romance to protect their careers or keep it a secret... and pray no one finds out?

Forbidden Kisses
When loving the wrong person is a punishable offense. 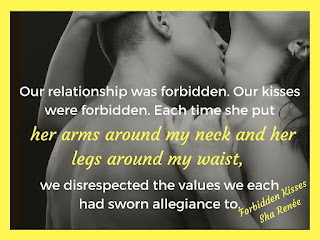 When Navy pilot, Ethan Parker falls for the woman he met at a coffee shop, he knows she’s the one he’s waited his entire life for. She’s sensual, sassy and smart. What he doesn’t know is she’s also in the Navy, and her enlisted rank means a relationship with her could get him discharged from military service.

While on leave from teaching at a top Naval facility, Layla Matthews tumbles head-over-heels for the sexiest man she’s encountered in a long time. The fact that he can hold an intelligent conversation is an added bonus. Her world is turned upside down when she later discovers he’s a Navy lieutenant. A senior officer. Her new boss. Definitely off-limits.


Continuing their relationship could ruin their military careers. Ending it would break both their hearts. Will they end their sizzling romance or keep it a secret... and pray no one finds out?


Forbidden Kisses is available on Amazon
~~~
The Author

Sha Renée is a native New Yorker who joined the US Navy right after high school. She now lives in New Jersey where she creates stories on the pages where duty, honor and passion unite.
A true nature lover, Sha enjoys spending time outdoors, usually with a camera in her hands. She’s has a passion for motorcycles and sports cars and is a fan of auto racing, military air shows and The X Games – pretty much any activity with fast wings or wheels.
She hates cooking, loves music and believes every day should include a cup of hot coffee and a glass of chilled wine.

Posted by Reviews By Crystal at 2:10 PM