#Sale ~ It Takes a Cat Burglar: A Thief in Love Suspense Romance By Cailin Briste ~ @CailinBriste 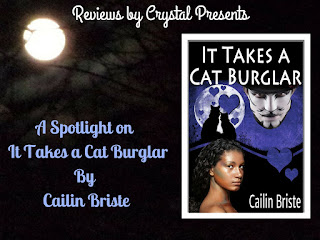 The first novella in the A Thief in Love Suspense Romance series is now on sale through June 13 for 99 cents. Perfect summer reading. 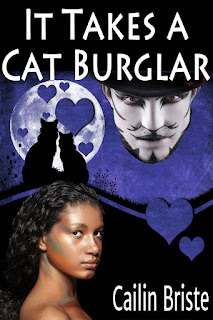 When Darcelle Lebeau throws off the invisible chains that keep her bound to her family, she discovers a new vocation. Tempted to enter the illegal playground of a man she nicknames Matou, she becomes a cat burglar in training. Deeply ensnared with each task he entices her to fulfill, she fails to discover his identity and true intentions. Sebastian St. Croix, a wealthy businessman, has a dark side. He’s a thief, a cat burglar who steals art and historical objects. For one year, he trains Darcelle to become his assistant, remaining incognito, observing her from afar. His admiration grows along with his desire for her with every phase-one challenge she completes. Phase two will test the limits of his control. Hands-on personal training? Yes. Sex? No. With his sister’s happiness at stake, nothing, not even the tempting Darcelle Lebeau, can interfere with accomplishing the biggest break-in of his career.


It Takes a Cat Burglar: A Thief in Love Suspense Romance By Cailin Briste https://www.amazon.com/Cailin-Briste/e/B00GSX9QVW/
Add it on Goodreads. 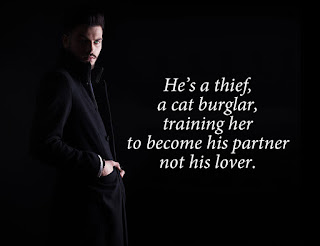 Four words. That’s all that was written on the paper in the same ornate handwriting
used on every preceding communication.
Congratulations. I’m behind you.
She froze.
How could she have missed it? The same dark, prickling tension that had inched along
her spine every time she’d sensed Matou observing her in the past was now knitting her
muscles and bones together, turning her to stone. It was him. He’d never let her see or
hear him, but her body reacted when he was near, as though when he gazed at her, a
furnace ignited inside her. It was damn spooky.
She jumped when his fingers closed on her shoulder.
“Don’t turn.”
Like a low, throbbing bass note, his voice resonated through her to the ends of her
fingers. Hell. She couldn’t move, much less turn. He trailed his hand along her
collarbone. Despite the thick layer of duracloth between her and his fingertips, Darcelle
was certain warmth penetrated the fabric.
His sudden yank startled her. Shock pulsed through her. He was undoing the seal on
the hood of her skin suit.
“No!” She batted at him, twisting to escape his grasp. He clamped her in a bruising
hold, immobilizing her.
“I said don’t turn. Stop struggling.”
Rapid inhalations of the sour combination of aged body odor and fear inside her skin
suit made her nasal passages burn. She continued to writhe, fighting to free herself.
He’s going to kill me!
“Fuck it. Stop. The air is pure. Look.”
Several moments passed before she registered the sun-darkened arm and hand waving
in front of her. Long elegant fingers twiddled. Her breathing hitched. No gloves. He
wasn’t wearing a skin suit. She stilled, allowing him to remove her hood.
“Do exactly as I say, and all will be well.”
With gentler hands he turned her toward him. She gasped. He was gorgeous. Only a
master sculptor could have formed a face of such perfect symmetry. The masculinity of
his high cheekbones, angled jaw, and straight brows was softened by his exquisite lips.
Heat flushed through her body.
From beneath black locks slanting over his forehead, pale green eyes stared at her. Was
he waiting for a response?
“Ummm.”
A smile flashed across his lips. “Are you ready to trust me?”
Darcelle pursed her lips. “I’ll try.” 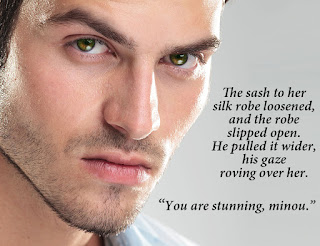 About Cailin:
Cailin has been writing fiction for six years and non-fiction for two decades. Her nonfiction
work has been published in magazines and in a non-fiction anthology. She’s a
member of Romance Writers of America, the RWA Fantasy, Futuristic and Paranormal
Chapter, and the RWA Passionate Ink Chapter.

Posted by Reviews By Crystal at 12:42 AM