#GiveAway #ReleaseDay ~ ALL IN FOR LOVE ~ By Sharon Buchbinder, Lashanta Charles.. & More 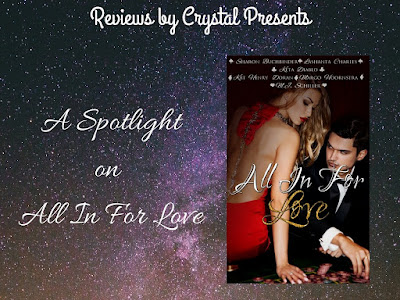 ALL IN FOR LOVE:
An Inn Decent Proposal By Sharon Buchbinder
Perfect Odds By Lashanta Charles
A Ghost To Die For By Keta Diablo
Raising Kane By Kat Henry Doran
For Money Or Love By Margo Hoornstra
Take A Chance On Me By M.J. Schiller

Giveaway:
To add to the fun, we are giving away one gambling themed handmade item to ONE lucky commenter who will be selected by a Random Number Generator.
ALL IN FOR LOVE:

Six award-winning authors bring you six *sweet to sensual* romances filled with suspense, thrills and maybe even a ghost or two—for less than the price of a cup of coffee—99 cents!

Welcome to La Bonne Chance Resort & Casino!
With thousands of people passing through the casino’s doors on a daily basis, it’s no surprise that a variety of lives and loves are on the line there. It’s said that you’re more likely to lose your heart at La Bonne Chance than a hand of poker. Whether you are the Director of Casino Operations or the guy who created its software, a jilted bride or a black jack dealer, a past guest’s ghost or a sous chef--when it comes to love, the stakes are high.

Ready to roll the dice?

An Inn Decent Proposal, Sharon Buchbinder
Can an hotelier with a past and a chef with a future revive the grand dame in a neglected old inn?

Perfect Odds, Lashanta Charles
When a jilted bride meets the man of her dreams, will she embrace the new plan, or cling stubbornly to the old one?

A Ghost To Die For, Keta Diablo
She didn't believe in ghosts...until one showed up in her room.

Raising Kane, Kat Henry Doran
Funny how a night in jail will change a woman's outlook on life.

For Money Or Love, Margo Hoornstra
She's the one woman he can't afford to lose.

Take A Chance On Me, M.J. Schiller
Who do you count on when the chips are down?

~*~*~*~*~*~
Excerpt from An Inn Decent Proposal by Sharon Buchbinder

After the hotel auction, a stunned Jim Rawlings and excited Genie King go to Sips, a local coffee house. Overwhelmed with self-doubts verging on buyer’s remorse, Jim begins to question his sanity. Genie, on the other hand, is bursting with enthusiasm and ideas…

“Why did you want this place?”
“The old girl called to me, begged me to save her.” He gave Genie a wistful smile. “Do I sound crazy?”
“You call the Inn ‘she,’ too?”
“Yes, she’s like a grand old dame who’s fallen on hard times.  Remember the parties? The famous people who stayed and played there? Celebrities came to the Inn because they knew their privacy and secrets were safe with us. If those walls could talk!  Every day was new and exciting. I would love to bring back her glory days.”
Genie leaped up, ran around the table and hugged him. “I have the same dream. We can do it.”
He hesitated for a moment, then returned the gesture, his hands unable to resist lingering on her luscious curves just a tad too long. Genie’s inviting cleavage made him wish they were somewhere private. He could scarcely breathe and had to shake his head to dispel naughty images of nuzzling her soft breasts. “We can do what?”
She sat down again, but clung to his hands. “I’ve done the research. The Inn should be in the National Park Service Historic Registry—but it isn’t. If we can get her added to the Registry, there are laws and standards about how we make the rehabilitation. We can bring it up to modern codes, but have to use certain treatments—”
“I hate to burst your bubble, but where will we get the money to do all this?” He wasn’t sure he could afford too many more big gambles like this last one.
Her face flushed and her sapphire blue eyes sparkled. “If we can get her added to the Registry, we’ll qualify for special low interest loans. And for a major tax credit. And we have a million dollars in equity.”
“Pretty, smart—and you say you can cook? If you can do all that, you are a genie.”
She released his hands, pulled her shoulders back, and inadvertently gave him a better glimpse of her bosom. Genie gave him a scalding look. “Are you challenging my cooking, Mr. Rawlings?”
Uh-oh. He never dreamed of Genie having a little temper. He couldn’t resist tweaking her. “I’m sure you’re a solid cook.”
She stood, almost knocking her chair over. “Solid? What the hell does that mean? Average? Good enough to make the turkey for Thanksgiving dinner for the family—but not good enough to cook for guests? Tell you what, Mr. Critic, you come to my house for dinner tomorrow night.” She scribbled her address on a business card and threw it on the table. “My food makes men go weak at the knees.”
Hypnotized by the sway of her voluptuous ass as she stalked out of the nearly empty café, Jim bet it wasn’t just this saucy woman’s cooking that made strong men weak.

Sharon Buchbinder and her husband used to breed and show Egyptian Maus and Color Point Persians (formerly called Himalayans). If you’ve ever seen the mockumentary, Best in Show, you have an idea of what life was like 24 out of 52 weekends a year for this wild and crazy couple. When Sharon returned to school for her PhD in 1986, she decided a doctoral program plus a toddler plus a full time job was more than enough and they placed all their cats in good homes—including their own.

Email ThisBlogThis!Share to TwitterShare to FacebookShare to Pinterest
Labels: @sbuchbinder