#GiveAway ~ ONE WEEK TO THE WEDDING By Olivia Miles ~ @MsOliviaMiles

ONE WEEK TO THE WEDDING:
An unforgettable story of love, betrayal, and sisterhood
Series: Misty Point, #1
By Olivia Miles
~*~*~*~*~*~
Q&A with Olivia Miles:

Q: What are you currently working on?
A: I’m currently putting some finishing touches on the follow-up story to ONE WEEK TO THE WEDDING. It’s called THE WINTER WEDDING PLAN. This one focuses on Kate’s sister, Charlotte, and will release just before the holidays.

A: I wish I could say that I had a direct source of inspiration, but usually one small idea takes on a life of its own and the story evolves in its own way.

Q: Do you have a favorite snack that like to munch on while writing? If so would you mind sharing what it is with us?
A: I don’t tend  to eat while I write. I don’t like crumbs on my keyboard!


Q: When you are not busy writing wonderful stories to keep us lucky readers entertained, what do you like to do? Do you have a hobby?
A: I like to garden, though I’m not very good at it, but mostly I’m busy running around with my daughter, who is still young enough to keep me on my toes. And my two little dogs occupy a lot of my attention. They’re quite mischievous. 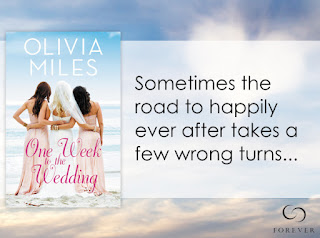 Charlotte knows she messed up. Big time. But she also knows something Kate doesn't-something that might bring them close again, if her sister will ever take her calls. But as time passes and silence grows, Charlotte begins to realize she can't hide from her problems forever, and that sometimes the only place to run is home.

With the wedding only a week away, Kate expects a few surprises. But what she doesn't expect is to find herself believing...in the strength of family, and the possibility of finding love again. 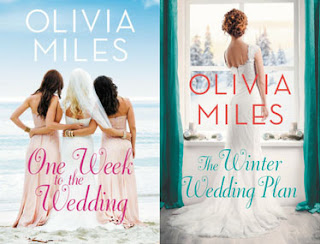 ONE WEEK TO THE WEDDING, #1
THE WINTER WEDDING PLAN, #2
Series Page on Goodreads 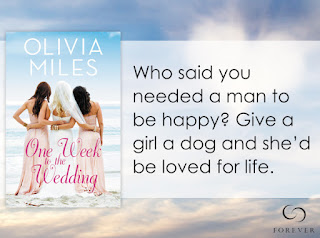 Excerpt:
Alec was leaning against the pole of a street light when Kate approached. Dressed in khaki shorts and a crisp white t-shirt that accentuated every curve of his thick biceps, Kate’s resolve since her conversation with Elizabeth had already weakened and she found herself fighting off the urge to run her hands over that rippled chest--
And that was officially crazy talk.
It had just been too long since she’d touched a man, that was all. It was a natural reaction that surely anyone would have to someone of the opposite sex after all this time. Especially one who looked like Alec.
“Hey!” He flashed her a big grin as she closed the distance between them.
She brightened at the sight of his friendly smile, wishing the response wasn’t so automatic. “Hey.”
Alec gestured to the bistro. “It’s full, but the wait should only be a few minutes.”
“I don’t mind,” Kate said, glancing at the customers who had filled the stretch of sidewalk tables. It was a romantic restaurant, one of the best in Misty Point, but she knew better than to assume this was why Alec had chosen it. He was visiting town, it was close to his hotel, and from an outsider’s point of view it probably just looked like a nice place to eat. Besides, he was probably used to picking the finest options. It was surely nothing more than that.’
And she shouldn’t wish it to be.
Just thinking of how betrayed her friend would feel to know that Kate was siding with the enemy was enough to make her come up with an excuse and leave. Going through with this dinner at this cozy little spot would make her the worst kind of friend there was. She knew too many people like this already, and she didn’t want to follow in their example.
She stole a glance at him, taking in the strong width of his back as he casually studied the menu outside the restaurant, his hands thrust in his pockets, his hair wavy and dark and just begging for her to tangle her fingers through…Stop it!
She opened her mouth, knowing she had to say something, but not knowing quite what, when she saw him. Jake. He was coming around the corner, laughing that laugh, smiling that smile, without a care in the world. He was rounding the bend, coming in her direction. She watched in frozen horror, not knowing whether to hide or run. Her mind ran rampant with every worst case scenario. Was he coming to the restaurant? Would he speak to her? What would she say?
What was he even doing here? He was supposed to be gone, long gone.
And then she remembered. The phone calls. Charlotte. Panicking, she darted her gaze, searching for her sister, not knowing what she would say if she saw her.
“Alec.” Her voice locked in her throat, coming out strained and forced.
He turned to face her, his eyes growing wide at the sight of her. “Are you okay?”
“I need you to do me a favor,” she whispered urgently. Her heart was pounding as her eyes zipped from Alec to Jake and back again.
He hadn’t noticed her. Not yet. But he would. And soon.
Alec rolled his eyes in a joking way. “Do the best man duties ever end?  What do you need me to do now? Arrange flowers? Frost the cake? Oh…I know. Kiss the bride?”
“No. Kiss me.” She blinked, shocked by her own words. It was rash, impulsive, and desperate. She was probably sending him all the wrong messages. But she didn’t even care.
For once, she wasn’t thinking about the ripple effect of her actions. Or what she would say in five minutes. All she could think about was the here and now. And that if she didn’t have time to run and hide from the people who had publicly humiliated her, the most she could do was prove to Jake—and Charlotte--that was over it. That they hadn’t hurt her. That she was just fine.
Alec’s eyes flashed as the smile vanished from his face, replaced with a look of surprise. “What?”
“Kiss me,” she repeated breathlessly, her mind racing. She hadn’t even contemplated the thought that he might turn her down, laugh in her face, storm off. It would make it all worse--seal her humiliation. “I need you to kiss me. Right now.”
Alec’s expression was frozen and for a moment Kate was struck with the horrifying thought that he would drag this out, or turn it into a joke. She didn’t have time for that. But then his brows lifted and his lips curled into a devilish grin. “If you insist,” he murmured, reaching down to scoop his arms around her waist in one smooth effort.
His kiss was anything but shy as he pressed his lips to hers, pulling her so close to his chest she could feel the heat of his body through his shirt.
Her knees went a little weak as she let herself go, and for a moment, she wasn’t even thinking of Jake or Charlotte at all. She wasn’t thinking of the hurt, the pain, or what would happen next, when they broke apart. She wasn’t thinking of anything

Olivia Miles writes women's fiction and contemporary romance. A city girl with a fondness for small town charm, Olivia enjoys highlighting both ways of life in her stories. She lives just outside Chicago with her husband, young daughter, and two ridiculously pampered pups.

Posted by Reviews By Crystal at 1:41 AM