#GiveAway #Interview ~ Out of Hiding by John Feldman ~ @johnfeldman_ @GoddessFish

Out of Hiding
by John Feldman

John Feldman will be awarding a $50 Amazon/BN GC to a randomly drawn winner via rafflecopter during the tour. Please use the Rafflecopter below to enter. Remember you may increase your chances of winning by visiting the other tour stops. You may find those locations here.

Crystal: Today I have the pleasure of hosting John Feldman. Welcome, John! I'm so excited to have you here today. Would you share a little bit about yourself with us today?

John: My name is Bruce Wayne and I’m a filthy-rich businessman who moonlights as a vigilante.
Just kidding. That’s Batman. I’m not Batman.
I’m a mid-thirties married man with a wife and two kids and a crazy passion to succeed at something I have yet to attain. Behind the aforementioned family, writing is everything to me. I love each and every second I get to sit down and tell my word processor how to tell my stories. I may not make a living from it yet, but one day I’ll be able to. Until then, I’ll keep pushing.

John: I do. And I hope you find it interesting:

Discreetly he looks over, then indiscreetly, and that’s when he sees the woman’s squinting and curious eyes on him. He drops the freshly-lit cigarette into the gravel and steps on the cherry, twisting his foot over top so not to blow up the ground he stands on.
Shit.
He lowers his head and pulls down the brim of his faded gray baseball hat to the top of his sunglasses. He holds the gas pump as the fluid pours past his hand and into the hunk of metal.
Look away or I’ll fucking kill you.
He can feel her still looking over at him and the gas cannot pump fast enough. He’s made it two states away and he’ll be damned if this one woman is the end of him. He’ll kill her right here if he has to. Right here in this parking lot. Let her nosey ass get a little closer and then slit her throat. Dump some gasoline on her smug body and watch her squirm until the life drains out of her. That’ll teach her to look over here.
She starts to walk toward him.
It’s not full yet, the tank, but he’s not taking any chances. He removes the nozzle, replaces the gas cap and heads for his car door.
Don’t do it, Lady, he thinks as he yanks back on the door handle. But she does it.
“Excuse me,” she says.
Herb stops, shuts his eyes. Breathe. He looks at her and smiles, but receives no smile in return. Instead he gets the look of curiosity, only magnified. She is within mere feet of him now and those squinted eyes show crow’s feet attached. Her mouth is open, lower jaw just hanging there lazily as she thinks.
“Are you…?” she begins, but then stops. And right at that very moment, Herb can feel the cold steel of the switchblade in his pocket. Hey, it’s saying to him. Come and get me.

Crystal:  Where did you come up with the idea for your latest release?

John: The idea for this book came from some characters I’d asked my wife to create. I was having some serious writer’s block and needed a push. She helped guide me in the right direction, but as I wrote the story I felt it still needed a little more.
That’s when Herb was born.


Crystal:  What are you currently working on?

John: My mind changes every day. I currently have 2 manuscripts in the “second draft” stage and I can never keep my mind set on which I feel more strongly about at the moment. So what am I currently working on? The answer to that is that I’m working on decisiveness.


Crystal:  Do you have any special routine that you follow when you are writing?

John: I do. But that sad part is, I come up with a new one every week—or sooner. On nine nights out of ten, I sit on the couch after a long day of working and I convince myself there has to be a better, more productive way of getting things done. And then I begin to plot how I can be more effective. I come up with some crazy plan that sounds like it’ll be the greatest plan ever. I’ll laugh and shake my head and wonder how I hadn’t thought of this before. But then four or five days later, I’m doing the same thing—breaking down ways I can get more done in a single day.


Crystal: Did you have to do a lot of research for this book or any other? If so, do you have a fascinating fact that you have learned you would like to share with us?

John:  For this one, I can’t say that I had much. For the most part, I just tilted my eyes toward the big ball of air sitting on my shoulders and went with whatever my memory had done for me. There were some scenes that needed an extra kick, but for those I just used what I’d remembered from movies and TV—doing a little Google research to make sure there were no severe inaccuracies beforehand.
And it’s for this very reason that some of my close beta readers wondered whether or not I was beginning to lose my mind.


Crystal:  Who are some of your favorite authors you like to read?

John:  I’m not really one to stick to a select few. I haven’t read enough to limit myself to just a select few. And in order to properly research as an author, I need to read as many other authors as I possibly can, in any genre I can. So I try to find a story that sounds intriguing and read it, regardless of the name on the spine.


Crystal:  Is there a genre you haven’t written that you’d like to try?

John: Fantasy scares me. I don’t consider myself a great creator of stories, but I do kind of think I can tell a good story. So for authors of fantasy, it blows my mind how amazingly into your own story you have to be. Fantasy writers don’t just create a story of their own, they create a world of their own. I mean, how awesome is that?

And while I think it’s an amazing feat, I simply don’t see myself fit for creating worlds. Instead, I’ll insert crazy scenarios into the world I live in.

Charles Dampor was supposed to be a blessing, but instead turned out to be a curse. A family torn by deception and greed now saw Emily for what she was, and a co-worker with a vicious past of his own now has his own personal vendetta against her. If Emily doesn't open her eyes and see the doors she's unlocked, she'll find herself at the bottom of Lake Bermin...with Charles's ex-wife.

~*~*~*~*~*~*~
Excerpt:
My eye is now on the bottom half, literally. The bottle is held up to my face, eye level. I can see the amount of liquid sitting in there, yet to be touched. Soon to be ingested, digested, then disposed of. That remaining fluid seems to have the possibility for a story in there. Each ounce contains a few words. That story could be the malicious murder of Emily Geiser. It could be. But it could also be the twist in the story I have yet to write. A twist I do not want. A twist leading to a happy ending. Emily and Charles live happily ever after, skipping off into the sunset. Maybe she gets a promotion, becomes his secondhand man. They cut out the money-hungry daughter Carla for good and enjoy their own life. And me? I finally get punished for the murders of Veronica, my wife and her whore friend Sam, and their boy toy. The possibility of me turning myself in could even be lying within the contents of this bottle, but that’s doubtful. The words that write that ending are in a second bottle, sitting somewhere on a liquor store shelf nearby. But I won’t go there. I haven’t had the urge for a Bottle Number Two in quite some time. 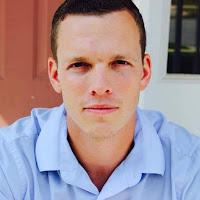 John Feldman was born and raised in southern New Jersey, but has since moved to Florida at the request (demand) of his beautiful wife. He has written several short stories and novels, including his newest release, OUT OF HIDING. He writes a lot, thinks a lot more, and is currently wondering why he’s writing this in the third person.

Posted by Reviews By Crystal at 2:52 AM