THE HOOKUP
By Erin McCarthy

Sophie: Numbers are my comfort zone, which explains why my sex life is a big fat zero. Then again, if I’m smart enough to earn a PhD, why can’t I calculate a way to get a guy into bed, just to see what all the fuss is about? With my prima donna sister, Bella, getting married in Maine, I figure her wedding is the perfect opportunity for my little experiment. And Cain Jordan seems hot enough—he’s certainly drunk enough—to show me what I’ve been missing. Judging by the body of evidence, it’s a lot . . .

Cain: Being stuck in the same town as my lying SOB twin brother, Christian—who may or may not be the father of the son I’m not allowed to see—is a hell of a reason to drink myself silly after the lobster boat docks each day. Any port in a storm . . . But Sophie’s different. She doesn’t play around. And she’s becoming a habit I don’t want to break. Because the smartest woman I’ve ever met is also the sexiest—and the only one who makes me want to change.

~*~*~*~*~*~*~
Excerpt:
18+ ONLY Please
I’ll take a beer.” Sophie sank down onto my couch, which was a very non-descript beige overstuffed monstrosity. She practically disappeared in the cushions.
“Sure.”
I went into the galley kitchen and opened the refrigerator. The shelves were pretty sparse but there was a six pack of light beer, which I knew Sophie liked. I snagged one and twisted off the top. Then I drew the whiskey across the countertop to me. I debated a glass, decided it was classier since I had company. I got a tumbler down and put two fingers in.
I carried both of them to the living room and handed the beer to Sophie.
“Thanks,” she said. She took a small sip. She had taken her shoes off and pulled her feet, covered in pink socks, under her legs.
Her panties were showing. That black dress was stretched taut across her thighs, and with her ankles crossed it created a perfect tunnel to her inner thighs. She was wearing black lace panties and I wanted to bend over and dive under that dress and taste her sweetness. My mouth went dry and I sat on the coffee table in front of her, sipping my whiskey.
“I can see up your dress,” I said. “Which might be an accident and it might embarrass you but I figure you should know. Or it might be on purpose, in which case, thank you. It’s an excellent view.”
Her cheeks turned pink. “It wasn’t on purpose. I didn’t realize you’d be able to see up my dress.”
Yet she didn’t make a move to cover herself up. Damn. This girl. My cock grew hard. “But now you want me to look?”
She nodded. “Yes.”
Fuck. She was going to kill me. I wondered how many guys had seen this view. If any. Maybe I was the first. I didn’t deserve this kind of privilege but I sure in the hell wasn’t going to turn it down. I studied her, head to toe, but spending a little extra time taking in what was under her dress. She didn’t flinch.
I reached behind my head and pulled my T-shirt off over my head. “It’s hot in here.” The house was too old and too Maine to have air conditioning. I had a window unit in my bedroom but the living room was just left to swelter if it got hot outside. I wasn’t sure how warm the air really was or if it was just me, watching Sophie.
She seemed to think my words and action were meant to be returned by her. She peeled her socks off and carefully folded them and set them on the table next to me. If I had to see her remove an article of clothing those little socks were the ones I cared the least about. But it amused me. Sophie amused me on the regular. It was a strange break in my usual life. I wondered if she knew what she was offering me, besides her virginity.
Her body was an offer I couldn’t refuse but she was giving me even more than that. A night that would shatter my boredom, my pattern of drinking to oblivion. She was going to be a much-needed distraction from my hatred, my self-destruction, my persistent defiance, and stubborn determination to be miserable.
Sophie took another sip of her beer and stared at me, waiting.
It was clear she wanted me to take the lead and I welcomed that. I wanted to take her innocence, coax it to something new. That awakening she had mentioned. I wanted her aware of me, sure, but mostly I wanted her aware of herself. Of her own body.
“Come here.” I crooked my finger at her.
“What do you mean?” she asked, and she looked vulnerable in a way that touched my bitter and black heart. She licked her lips, uncertain. Her feet fell to the floor.
“Climb on my lap facing me,” I instructed. “One knee on either side of me. I want to kiss you.”
Her mouth opened and I knew she was about to ask some insane question about physics or my motivation. I shook my head. “Shh. Don’t worry. Tell me if you don’t like something. And tell me if you do like something. Otherwise don’t think, Sophie. Just feel.” I held my hand out to her.
She took my hand and let me pull her off the couch. But she said, “I don’t know how to do that.”
“I’m here to help.” I did exactly nothing of value on a daily basis. Sure, I did my job correctly and efficiently, but I couldn’t claim to be a person who was walking around paying it forward. I was a sour-faced dick most of the time and everyone knew it. I knew it. But if I was going to be selfish and enjoy Sophie’s naked company, the least I could do was make this right for her.
My little protégé could go forth and fuck after I was done with her. Such a nice guy. The thought made me smile as she climbed onto my lap, her dress rolling up her thighs so that her warm flesh pressed against the denim of my jeans.
Holding her by the back of her hips I bent over and sucked the swell of her breast in between my lips. Soft, luscious tits.
Yeah. Such a nice fucking guy. 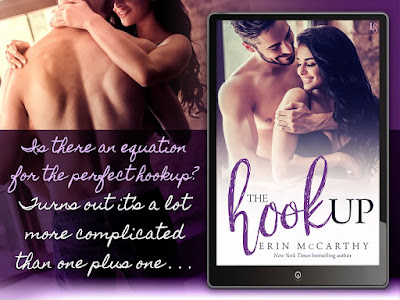 New York Times bestselling author Erin McCarthy sold her first book in 2002 and has gone on to pen more than sixty novels and novellas in the paranormal, contemporary romance, and young adult genres. A RITA Award finalist and an American Library Association winner of the Reluctant Young Adult Reader award, McCarthy is a member of Romance Writers of America, Horror Writers Association, and Ohioana.

Posted by Reviews By Crystal at 10:20 PM