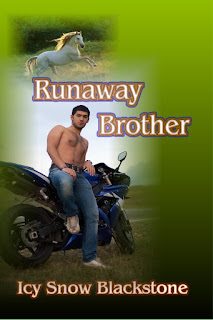 Crystal: Today I have the pleasure of hosting Icy Snow Blackstone. Welcome! I'm so happy to have you here today.  Would you share a little bit about yourself with us today?

Icy Snow: Here’s what the promotions manager at Class Act Books thought up:

Icy Snow Blackstone was born in 1802, in northern Georgia where her father, the Reverend John Blackstone, was prominent in local politics. She married a minister, raised seven children, and lived there all her life.

Two hundred and five years later, her great-great-great-great-granddaughter began using her name as a pseudonym for her romance novels. The present Icy Snow Blackstone lives far from her Southern roots in Lancaster County, Nebraska, where she continues to write romances.

Icy Snow: Just see below for a blurb and an excerpt of Runaway Brother.

Icy Snow: There was an old movie on TVB, Sullivan’s Travels, about a millionaire who goes on a road trip to see how the “other half” lives. It was during the depression and he got his eyes opened and fell in love, too. I decided to update it a bit and have him be runaway from family responsibilities and traveling through the South, to dispel a few clichés about that section of the country.

Icy Snow: Not really. I usually write from 1 to 4 in the afternoon, reserving mornings for errands and evenings for a little entertainment such as going to a movie, reading a book, or watching TV.

Icy Snow: For Runaway Brother, I did a great deal of research on horse shows, especially showing Arabian horses, and that included the costume the rider usually wears. I also did a lot of search on the history of the Arabian.

I found there are some legends about how the mares becoming the mothers of the Arabian breed were chosen. The most interesting one is: The Prophet penned together one hundred mares, he kept them without water and then freed them. All ran to drink and then he blew his war bugle. Only five had stopped and returned to him, and those were the chosen ones.

Icy Snow: I like Norah Roberts and Irish Johansen. Good plots with romance and adventure, and good characters.

Icy Snow: I’ve never written a political thriller. I don’t think I’d have the finesse to pull it off.

Icy Snow: I appreciate the opportunity to be here. Here’s that excerpt I promised:

At the age of twenty-two, newly-graduated Nicolo Liguori is forced by his three brothers to become care-giver for his father, who suffered multiple strokes. For the next ten years, Nick gives up his own ambitions , working during the day in the family jewelry business in Vanderhoek, New York, and returning to the Liguori mansion every night, to be at his father’s beck-and-call. Then Papa dies and Nick is free…or is he? Carlo, Marco, and Pietro expect him to continue life as usual, but Nick has other ideas. Secretly buying a motorcycle, he starts to work one day and… disappears.

Nick gets as far as the southern coast of Georgia before an accident disables his bike. Stranded, with no idea of the South except what he’s seen on TV, Nick isn’t certain what kind of reception he’s going to get. Then, a pretty Southern miss and a white tank disguised as a temperamental horse named Shazam change his life as they and the citizens of Oceano teach a runaway Yankee about life and love in a small Georgia town.

e-Books/Kindle from Amazon: https://amzn.to/2jTNdj1
Posted by Reviews By Crystal at 2:42 AM