HAPPY BOOK BIRTHDAY TO G.P. GADBOIS AND TRUST ME! 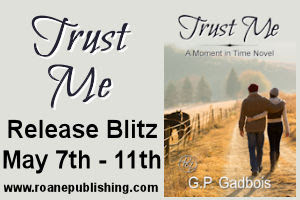 Trust Me
A Moment in Time Novel
by G.P. Gadbois

The attraction Suzanne feels towards Bill is intense when their paths cross again. Because he is seeing someone else, she keeps her feelings bottled up and leaves. To heal from the heartache, she turns to family, her girlfriends, and her horse.

Bill knows he’ll never settle for another, but trusting Suzanne has its risks. He listens to his heart, breaks up with his current girlfriend, and takes a trip to Canada to woo Suzanne.

Bill must return home. Unable to deal with the separation and a long distance relationship, Suzanne makes a life changing decision and moves to Bill’s home town.

Will the nasty graffiti, the threatening notes, the interference of Bill’s ex-girlfriend, and the tragic break-in impact Suzanne’s decision and send her back home for good?


The sky grew dark, the wind picked up, and it started to drizzle. Bill hurried, bought a burger, fries, a drink and returned to his bench at the top of the bleachers. On fairgrounds the further away he was from the horses, the better, he felt. He pulled his jean jacket on, put on a baseball cap, and kept his head down. He munched on the greasy food, and watched the Flag Races.

Suzanne’s turn came up once again. Her skill, speed and accuracy to pick up and drop off the flag into the barrel in 9.352 seconds got her the fourth place. Bill found her results amazing since this class had a larger number of participants, both male and female.

It poured rain during the Keyhole race. The spectators thinned, only the die-hard stayed to watch. Bill kept his eyes on the gorgeous cowgirl waiting near the gate. He kept his head down as Suzanne scanned the bleachers often. I’m a sitting duck here. To his relief, her name was called. She patted her horse’s neck and readied herself. She raced between the four barrels. Cinderella turned sharply, slipped and bumped into a barrel that wobbled but didn’t tip over. Bill stood holding his breath until he realized Suzanne was safe and the race was over.

Only a couple races left before I surprise her. Bill wiped his sweaty hands on his damp jeans. To calm his nerves and stretch, he left his seat. I should have brought flowers. The muddy path leading to the carnival area didn’t have one single wild flower, not even a dandelion. I’ll get her a teddy bear instead.

“Everyone wins.” The girl at the dart booth shouted, waving her arm. “Come here, give it a try. You can’t miss.” She convinced him.

He handed her five dollars and she gave him three dull darts. He burst two out of three balloons and walked away with a plastic mini-dinosaur. If this doesn’t win Sue over, nothing will. He shoved his prize into his coat pocket and returned to the bleachers.

The rain stopped, but the sky remained grey. In the arena, the Pole Bending races were taking place. Bill decided this race was his favorite. Cinderella and Suzanne raced to the far end of the poles, maneuvered around each pole with skill and grace once, then again in the opposite direction and raced back to the finish line at a high speed. Suzanne hugged Cinderella when she stood in the ring with her second-place ribbon.

The Dash Race was the last game of the day. Speed being the main objective, Bill thought it breath-taking. Cowboy hats flew off as riders and horses sped from one end of the ring to the other. All-in-all he found this race demonstrated the strength and speed of the horses more than the skill of the riders. Suzanne and Cinderella were good, Serge and Alexander the Magnificent were better in this race, finishing three seconds sooner.

Games are over, it’s show time. Bill followed Mr. Martin’s instructions and found Suzanne in between trailers, brushing Cinderella. Although the horses appeared to be tied safely to the trailer, Bill froze; too many horses in the small, confined area. You came this far, don’t let this stop you. Bill’s pep talk was interrupted.

“Sue, are you hungry?” A voice boomed from behind him.

“Only if you’re buying.” Suzanne replied without looking up.

“Come on, you won more than I did.” The man squeezed past Bill and stopped beside Suzanne.

Bill envied and hated the guy all at once. He’d moseyed in and stolen his moment.

“Brian, stop whining…” Suzanne said as she stood and turned to face the intruder. She closed, and then opened her eyes. “Bill!”

Brian followed Suzanne’s gaze and his eyes narrowed as he examined Bill.

“Is it really you?” Suzanne moved around Brian. “How long have you been here?”

“All day. Please come closer?” Bill ignored the intruder, and sprung his declaration for all to hear. “I’d like to take you up on that second chance offer.”

Her eyebrows rose for a split second before she smiled, and ran into his open arms.

“God I’ve missed you, Sue.” He lifted her off the ground.

“Sue, will this reunion be long?” Brian barked.

“I hope so,” Suzanne replied without looking at the guy.

Bill set Suzanne down and pulled her against him. She was finally where he wanted her.

“Fine, I’ll see you around.” The intruder took his leave.

Suzanne ran her hands up and down Bill’s back. “I’m so glad to see you, but I can’t believe you’re here.”

He’d waited so long for this moment, and didn’t want to waste it with explanations. There would be plenty of time later. He tilted her chin up and kissed her. She tensed, but didn’t fight it. A hint of peppermint lingered on her soft responsive lips and the combination excited his senses. Horses neighed and Bill’s head shot up. He closed his eyes and took a deep breath when he saw no one around. His promise to Mr. Martin would be hard to keep.


G.P. is Canadian. A wife and mother of three who works in school bus transportation. In her last year of high school, she enjoyed writing a weekly column published in the French newspaper in her home town. Writing took a back seat for years and now that her children are grown, it’s become her favorite hobby.

Entertaining others is like breathing – it is part of who she is.

Posted by Reviews By Crystal at 2:15 AM