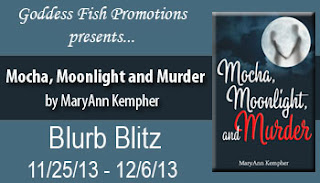 MaryAnn will be awarding an autographed print copy of the book (international giveaway) to a randomly drawn commenter during the tour.  Please be sure to leave a comment below along with your email address. To increase your chances of winning stop by the other tour stops. You may find the other locations here... http://goddessfishpromotions.blogspot.com/2013/10/virtual-blurb-blitz-tour-mocha.html

Instead of feeding her late-night appetite, a midnight food run nearly gets 28-year-old Katherine O’Brian killed. She’s the only person to see the man who brutally murdered a local woman, and the killer is hell-bent on making sure she doesn’t talk.

Scott Mitchell left a broken engagement behind when he moved to Reno, and the last thing he needs is more melodrama. But when he and Katherine are paired for a college project, that’s what he gets. It can be very distracting when someone is out to kill your lab partner. Together, they try to figure out what the police haven’t been able to—the identity of the murderer. Passion flares, but with Katherine’s life in danger, romance seems like more than a bad idea.

Scott and Katherine will face jealousy, misunderstandings, lust, and rivals, not to mention attempted murder—and all before their first real date.

Scott awoke on Saturday morning with a dry mouth and a slight headache. Looking into the bathroom mirror, he said out loud, “You look like hell, buddy.”

She came in and sat on the couch, one leg comfortably tucked under the other and her café mocha nearby.

“You look hung over,” said Katherine.

“I am hung over,” said Scott as he sat next to her.

Katherine was finally used to his height, and she could even control her reaction to his deep voice, but now he was so near and wearing only a pair of thin pajama bottoms, and they were very alone. She tried not to look at his chest and stomach, which were toned and muscular but not overly so, with just the right amount of chest hair. She concentrated on her cup, afraid that what she felt was obvious on her face, and forced herself to think about Michael, anything to take her mind off of Scott’s body. Just then her phone rang. It was Amy.

At the same time, there was a knock at the door. Scott got up and looked through the peephole. He didn’t recognize the woman at first, but then it all came back to him. It was Verna, the woman he’d met the night before. Everything started coming back to him. He’d been drunk, very drunk. She’d offered to drive him back to her place. They’d never made it there. That reminded him, he’d have to find a way back to the club for his jeep. He’d gotten sick in her car, and she’d brought him home. He was grateful, but a little worried when he saw her through his peephole. Was she going to be his stalker? Only one way to find out. He opened the door. She held up his wallet.

“You dropped this in my car.”

“Wow, thanks for bringing it by - and sorry about your car.”

With a nod, Verna indicated she’d like to come into the apartment. He glanced back at Katherine and heard her say, “Michael?” He sighed and stepped out into the hall with Verna. “How did you find me?”

“Your driver’s license, of course.”

Amy had called to ask Katherine about her date with Michael, and while they were talking, Katherine had seen the woman who’d knocked, but she hadn’t heard Scott’s conversation with her. She’d watched as Scott went into the hall.

Hello, you do have a guest.

After a few minutes, Scott walked back in and sat down.

“Her name’s Verna. We met at a club last night.”

“You went out last night?”

“I told you I probably would.”

“I left my wallet with her by accident.” Well, it’s true.

“Did you sleep with her?” A slightly accusatory tone had entered Katherine’s voice. Realizing this, she cleared her throat. She pretended a cheerfulness she didn’t feel. “Well, tell me all about it.”

To Scott, it was bad enough that Verna knew he was a lightweight. Katherine didn’t need to know it too. Plus, he didn’t want to start giving out details of his night - those he could remember.

She tried to mask her feelings by telling Scott about her date. “We had a lot of catching up to do. He’s—”

“Please, spare me the details. Good food, good time. That’s all I need to know.” He looked around his apartment. “I need to get some pictures up. There’s an echo in here.”

“Are you sure it’s not in your head?” said Katherine, smiling.

Scott didn't turn his head but said quietly, “Pretty sure.” Then he turned on the television. A local celebrity had died.

“If I die, will you go to my funeral?” asked Katherine.

“Will there be food there?” answered Scott, with a straight face.

MaryAnn Kempher's writing is infused with romance and mystery. Her
love of romance stories goes back to her teen years spent living in
Reno NV where Mocha, Moonlight, and Murder is set. MaryAnn's
travels have taken her to beautiful cities in Italy, Southeast Asia and
the sultry desert country of Qatar. She met her husband on one of her
romantic misadventures. She has two children and currently lives in Florida where she and her family share their home with two dogs and a cat. Her writing influences include favorite authors Jane Austen and Agatha Christie. She's also a huge fan of the Hercule Poirot mysteries.

Her guilty pleasures include any and all sweets, including a good cup of Mocha.