Worst epic fail of her scientific career? Falling for a cyborg she helped create.

Kyra Winters never meant for her cyber science discoveries
to be used for evil, but that’s exactly what happened. Now returning Peyton 313’s humanity is the last chance she’ll ever have to atone. She can’t get back the lost decade, but she can change the present by restoring the cyborg who was once Marine Captain Peyton Elliot.

Certainly her grand plan for rectifying her mistakes didn’t include madly kissing the confused, passionate Marine when he begged her to.
The same scientific mind that constructed the cyborg creator code now warned her not to let Peyton’s tempting offers of heaven cloud her rational decision making. Yet it’s difficult to resist the cyborg she’s restoring when he’s also the most intriguing man she’s ever known.

Satisfied by his fierce complaining, Kyra walked back to the
chair and knelt at his feet again. She had thumb-printed the chair restraint
locks so a light swipe across the sensor instantly opened them. After the ankle
ones were removed, she removed the one across his chest. Lastly, she moved to
his wrists, pausing as she met his questioning gaze. She had to tell him what
she was feeling. The urge was too compelling and his gaze was too full of hope.
“Today you are more yourself than you’ve been in a long time, Captain Elliot.
Since this may be the only nice conversation you and I are ever going to have,
I want to thank you for your military service and all the amazing things you’ve
done. I’ll even admit that you’re far more charming than your record indicated.
In another time and another place, I might have been willing to play all kinds
of flirty games with you. But this is definitely not that time or place. We are
suspended between heaven and hell right now, and neither of us is an angel.”

“Sleep in the cage with me tonight and I’ll show you heaven,
Doc. I don’t think I’ve ever wanted a woman as much as I want you right now.
Sorry if the speed of my interest offends your sensibilities. I’m listening to
a little voice that keeps yelling inside me. It’s saying this may be my one and
only chance to get you to see I’m more than just some super soldier machine in
need of fixing.”

Kyra felt her lip tremble and bit it hard to make it stop
before she answered. “I already know that about you. That’s why I’m doing this.
Now don’t make me like you any more than I already do.”

Kyra wondered if Peyton’s desire for her was a lingering
after-effect of all those years of Cyber Husband programming? He would have
studied her file extensively because Norton would have made him do so. He would
have learned all he could about her likes and dislikes. That’s how the program
worked. She purposely hadn’t removed that chip because she needed him to like
her at least a little for just a while longer.

Peyton stared at the woman’s disappointed face. She looked
ready to cry and he couldn’t stand seeing her that way. “How about a kiss to
test your theories about us, Doc? Just one. I need it and I think you need it
too. You already admitted you weren’t married. Look—my wrists are still chained
to the chair. What could one kiss hurt? Come on—what do you say?”

Kyra sighed. She was as exasperated with him as she was
charmed by his pleading. Tomorrow Peyton Elliott was going to hate her. She was
one hundred percent sure of it because it had been proven true twice already
before him.

Tomorrow when Peyton Elliott knew the truth, he would hate
his life and those who had consigned him to his living hell. Tomorrow the
machine would be partially back and Peyton would not be this light-hearted,
mostly human version of himself. He would be a new kind of redefined cyborg.
While no one knew what that was going to be like—not even her—she would bet her
retirement Peyton was still going to hate her after he integrated the present
with his past.

Kyra sighed loudly. “You’re a hard man to say no to and
today I’m a sentimental fool. Close your eyes, Captain. I haven’t kissed a man
in a long time. I can’t look at you or I’ll lose my nerve.”

When Peyton sighed dramatically in return and leaned his
head back, Kyra climbed on the electrical shield at the bottom of the operating
chair until she was standing between his legs. Heat emanated from every inch of
the man and he still smelled a little like burnt circuitry. Yet underneath that
stark reality, Peyton also smelled masculine and very alluring.

Kyra sighed again. “I wish I could send you out the door to
live whatever kind of life you want just as you are right now. That’s what you
deserve, Captain Elliott. I want that badly for you, but I can’t make it
happen. Your cybernetic enhancements require you to retain knowledge of how
they work. Too much is at stake and the outcome of your healing affects more
than just the two of us. But thank you for giving me a glimpse of why putting
you through this hell is so important. This moment—it’s very humanizing for
both of us—to want to be kissed and then be kissed. Thank you for sharing this
moment with me.”

“Man, you sure talk a lot. Still waiting for that kiss,
Doc,” Peyton said. He was keeping his eyes tight and his mind off how sexy she
sounded when she got all philosophical.

Kyra snorted at his chastising. She touched her lips to
Peyton’s and instantly found her bottom one nipped aggressively between two
rows of even teeth. Moaning at the delicate trap he’d set for her, her body
tipped forward against his and she had to catch herself on his wide shoulders.
Her hands slipped over them and down his chest without her mind questioning the
action.

When she moaned against his mouth, Peyton ordered himself to
turn loose. After he did, he stared hard at the lip he’d bitten. The woman
wanted him. He could taste it, smell it, and damn it he wanted her too. It was
exhilarating to feel such pure desire flowing so freely through his cells.

A demand to sate that intense longing came from some
desperate part of him that was both familiar and strange at the same time. What
the hell was happening to him mind? It was both relieving and like finally
waking up after being asleep for too long.

“Climb up here and give me a real kiss, Doc. And don’t be so
damn stingy with sharing your tongue. I intend to use it to imagine what else
I’m going to do when you cut me loose from this freaking chair.”

Groaning at how aroused he’d just made her with his sexy
declaration, Kyra climbed into Peyton’s large lap to straddle him. It gave her
better access to his mouth and the chance to indulge just a little more as she
eased her hips down on him. She sighed at her nearly out-of-control feelings
and touched her forehead to his.

“The only reason I’m doing this is because I know you’re
going to take great pleasure in ridding yourself of this memory tomorrow. I
won’t blame you for that action, Peyton. I think it’s the smartest thing you
could do.”

“Stop whining about what hasn’t happened yet, Doc. It’s damn
cruel to suggest this instant attraction between us is nothing. Now kiss me
like you want to—and damn it I know you want to. I am a cyborg, you know.”

He ordered his processor to store the image of her face just
as she caved into his demand and dipped her mouth to his. Her lips were lush
and hot and wet, and her kiss was the most deliriously wonderful experience he
could recall happening in ages. He watched her eyes close in pleasure as he
strained towards her, but froze in the chair when he saw two tears run down her
face. A second later, tears were flowing off her chin in two tiny, steady
streams.

“What? What is it, Doc? What’s wrong with this? The
attraction is mutual, isn’t it? We’re alone in here just the two of us. I’m
wearing too many damn restraints to do much harm to you. Hell, keep the chair
restraints in place woman—just be with me before I die from wanting you.”

“I can’t. I can’t take advantage of you, no matter what I’m
feeling,” Kyra said, lifting her arm to swipe at her eyes. “Thank you for the
sexy kiss, Captain. It’s been a very, very long time since I felt anything
remotely close that level of desire for a man. Even if you wipe this away, I’ll
never forget it—or you.”

Kyra slid reluctantly off his lap and straightened her
clothing. “I’m going to release the last of the chair restraints now. Please
keep your distance so I don’t have to use the controller. I’ve hurt you enough
in the last couple of days.” 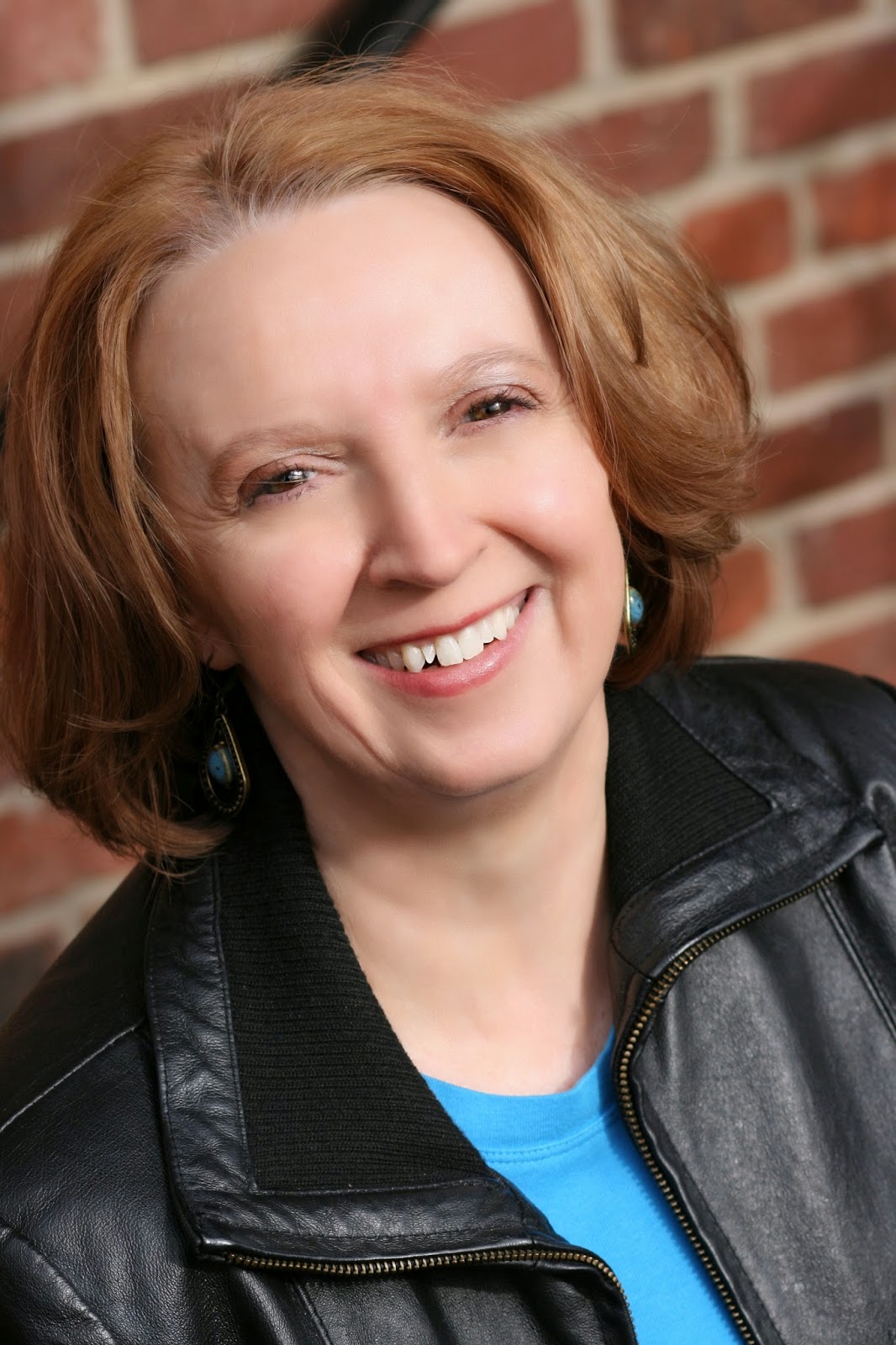 Donna McDonald is an active dreamer and finds writing to be the best way to use her creativity.

Needing to satisfy both sides of her brain, she is a cross-genre author of contemporary, fantasy, and paranormal romances. Her books appear on bestseller lists for humor, romantic comedy, space opera, and more.

She craves laughter from her readers and focuses her
attention on making that happen as often as possible. She loves to hear from anyone who has read her books.

Donna McDonald considers herself blessed to be a best-selling author in Contemporary Romance, Humor, and Paranormal Romance. Paranormal reviewers are calling McDonald "a literary alchemist effortlessly blending
science fiction and romance". Contemporary and humor reviewers often write to tell her that the books keep them up laughing all night. She likes both compliments and hopes they stay true forever.

Her idea of success is to be sitting next to someone on a plane and find out they are laughing at something in one of her books. She hopes that will be you.
Posted by Reviews By Crystal at 12:30 AM