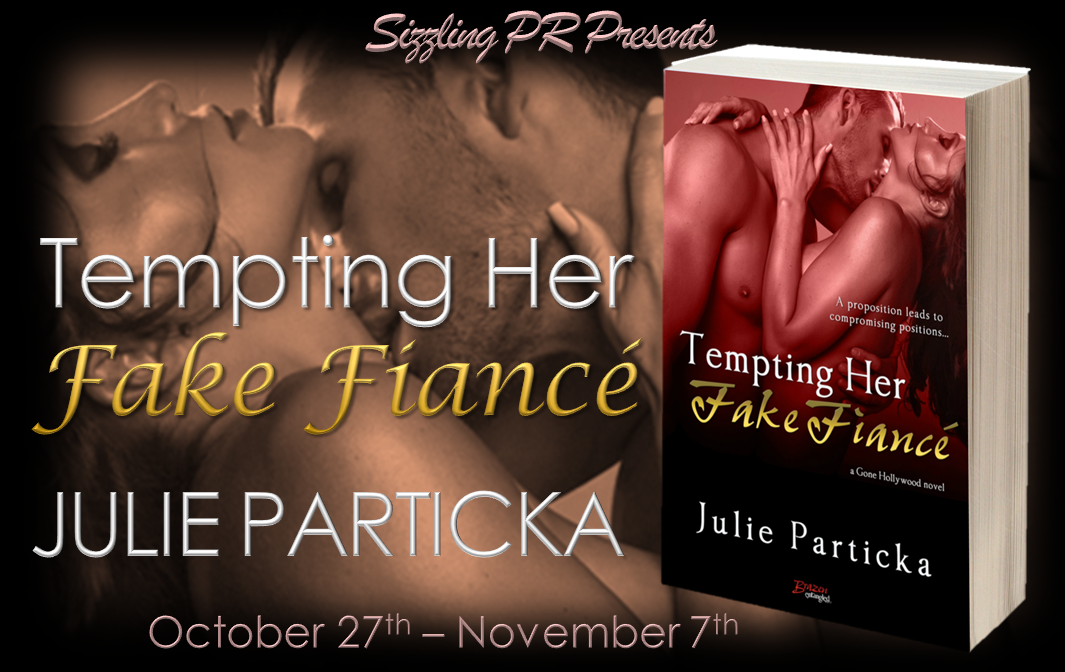 A proposition leads to compromising positions...

Journalist Stasia Grant needs a hero. Specifically one who will help her humiliate her ex-husband after he publicly left her for another woman. In Vegas for the biggest interview of her career, Stasia is grappling with a broken heart, her cheating ex (and the other woman), and a serious need for revenge. Her salvation comes from the most unlikely place― charming and sexy-as-all-get-out action star Evan Stone.

After spending his life playing a superhero, Evan has a plan for delicious satisfaction: a fake, week-long engagement. He'll not only show Stasia's ex what he's missing but gain some sympathetic publicity to turn around his image as a player. It's win-win for them both. But neither expected the sizzling chemistry that erupts whenever they're together. Stepping out for the paparazzi, Stasia and Evan are about to pull off the performance of a lifetime...but will they fall for their own con?

Julie Particka was told to get serious about her future in Junior High. Several years after getting a bachelor's degree in chemistry, she realized being serious was over-rated and went back to her first love--writing. Now rather than spending her days in the drudgery of the lab or teaching science to high school students, she disappears into worlds of her own creation where monsters sometimes roam, but true love still conquers all.
She can most often be located in the Detroit area with her favorite minions (the ones who know her as Mom) where she is currently hatching a plot for world domination. It involves cookies for everyone, so she's pretty sure there's no way it can fail…except the minions keep eating the cookies.

He helped her stand, and then he knelt, tugging off her panties. Her skin glistened with sweat and her need. As he got ready to stand, he swiped his tongue over her folds, and she shivered, sagging back against the pool table. “Touch yourself for me. I want to watch you while I get a condom.” When she didn’t move, he licked again and dragged her hand forward. “Touch yourself, Stasia. Just the way you like.”
“I don’t—”
“Yes, you do. Everyone does. Only this time, you’re going to do it for me.” On his feet again, he moved toward the couch and his abandoned sweatpants, watching as she tentatively pressed two fingers to her clit and started rubbing in little circles. “Yeah, babe, just like that.” He dug in the pocket of his sweats, catching the foil packet he’d snagged earlier just in case. When Stasia arched her back, though, he almost dropped the damn thing between the seat cushions. He slid his underwear down as he approached, kicking them free as soon as he could. Her gaze fell on his cock, her previous task forgotten. “Don’t stop.”
Difficult as it was, he didn’t move any closer until she started masturbating again. Only when he was between her thighs with the condom rolled on did he shift her hand out of the way. Without a word, he wrapped her in his arms, picking her up. She wriggled against him, her goal crystal clear as he carried her to the nearest wall—the windows overlooking the Strip.
“Are you sure this is a good idea?” She cast a nervous glance at the view behind her.
“Babe, it’s the middle of the night, and we’re several hundred feet from the ground. No one is going to see us.” As soon as she was pressed securely against the glass, he eased her over the head of his cock.
“Oh God, Evan. Go slow. Please go slow.”
He wasn’t sure how slow he could go, considering how tight she was around him. For the same reason, though, he had little choice if he didn’t want to hurt her. He caught her mouth with his, tugging her lower lip between his teeth. “I won’t give you more than you can handle.”
Stasia shook her head, and her hair shifted on the glass, forming a tangled mess as her nails dug into his shoulders. “I want it all. Every inch of you.”
Even with how slick and ready she was, sheathing himself in her was the most amazing kind of torture. Both of them were gasping when she reached his hilt. Her hips shifted as she rubbed against him, her insides squeezing even tighter. He growled in her ear. “Keep that up, and I’m going to come before you want me to.”
She trembled against him. “I want you to. And then I want to do this again. And again.”
Fuck. She undid him with her words as much as with her body. If it was the last thing he did, he was going to spend the night erasing sex with her ex-husband from her memory. And he’d enjoy every second of it. “As many times as you want.”
Gripping her ass to hold her in place, he thrust into her while he nipped and kissed every inch of skin he could reach. Far too soon for his taste, Stasia’s muscles clenched around him as she came again, screaming his name. The pressure pushed him to the edge, and he couldn’t hold on. The orgasm ripped through his entire body, and he bit down on her shoulder, hard.