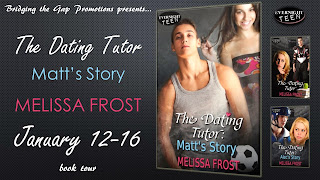 
Crystal: I am so happy to have Melissa Frost stop by for a short interview today. Welcome Melissa! Would you share a little bit about yourself with us today?

Melissa: One of my favorite elements to this series is the sports. There is a scene in Matt’s book where he and Sasha are playing a game of one on one soccer in the rain. It gets very competitive and extremely muddy. Here is an excerpt from that scene. I hope the readers enjoy it as much as I loved writing it.

There was sweat running down the center of Matt’s back, and his blond hair clung to his forehead in clumps. His heart was pounding in his chest, adrenaline pumping through his veins as he watched Sasha coming toward him with an aggressive curve of her lips.
With appreciation, his eyes tracked the way she moved with the soccer ball. She darted forward, juking and dodging so he couldn’t pin down which direction she’d be shooting from. If he’d learned anything in the past hour, it was that she was damn good at her sport. He had a new appreciation for soccer. In fact, he had a new appreciation for women’s sports in general, because Sasha was one tough chick.
He focused in on the ball, watching her shift it from one foot to the other. Her feet danced in complicated steps, all of them meant to confuse him. Somewhere in his subconscious, he noted thunder rumbling in the background, but he ignored the first raindrops as they began to fall. He tried to block out everything but the ball. All that mattered was that ball and where it was coming from.
The rain didn’t seem to bother Sasha either, because she kept coming without the slightest hesitation. She was nearly on top of him now. With a hard, targeted kick, she sent the ball sailing in his direction.
Matt jumped to his left and knocked the ball away with his elbow.
Sasha was on the rebound like a dog on dropped scraps of table food. She recovered the ball and was darting away, making a rush for the right side of the net before he even processed the save. Taking advantage of his slower reactions, she took a second shot.
Matt dove across the net in a desperate attempt to keep her from scoring. He barely managed to bat the ball away with his outstretched hand. He watched it rebound back to her as he fell to the grass, grunting in discomfort.
Sasha showed no mercy as she buried the ball in the far left side of the net. “Goal!” She raised her arms in the air in victory. Dancing backwards away from him, she cheekily said, “Not too bad. For a hockey player.”
Matt lay on the ground for a moment, his breath escaping him in harsh exhales. Rain pattered down on his back, soaking through his shirt. He ignored it and pushed to his feet. “Okay,” he said. “You had your fun. Now it’s my turn.”


Crystal:Where did you come up with the idea for your current release?

Melissa: Matt was in the second book of the series and had more to say. He was close friends with the main character, but we didn’t get to see much from him. I felt he deserved a spotlight. As a result, book three was born.

Melissa: I have plans to write Sasha’s story next. We saw Matt’s version of their courtship. Now it’s time to see what Sasha thinks in return.

Melissa: I did have to do some research for this story. My son plays soccer as well as hockey, but he’s new to both sports. I had to do some research, more for the soccer than the hockey, to find out different positions, offensive moves, and regulations. I already knew the basics, so I didn’t learn anything too exciting. It is interesting to know that hockey pucks are made out of vulcanized rubber, though. I feel smarter knowing that. Haha.

Melissa: I enjoy a multitude of young adult authors. One of my favorites is Eoin Colfer, the author of the Artemis Fowl series. I love Artemis. It was such a brilliant idea to start the series off through the eyes of the “bad guy”.

Melissa: I think I would enjoy writing a “Wild, Wild, West” type story. I think that would be extremely enjoyable. It would take a lot of research though, as I’m not very familiar with Westerns.

The Dating Tutor, 3
Matt Wendell is perfectly content in his single life. That is until Sasha walks into it. Being the cousin of his best friend Alec, Sasha is off limits. She’s the one girl he can’t have, and the only one he wants. Even if he wasn’t restrained by the ‘friends only’ stipulation, Sasha has put up a wall around her heart that is going to be hard to tear down.
Alec introduces the two under the strict instructions that Matt is to learn how to become friends with a woman. This task proves difficult, as Matt’s only interaction with the opposite sex has been of a romantic nature. As time goes on and their friendship strengthens, things get more and more challenging, because the more he learns about Sasha, the deeper his feelings for her become.
Can this non-committal guy change his ways? And can he convince Sasha that he’s in this for the long haul?
14+ for sexuality and adult situationsContemporary Romance, @30k 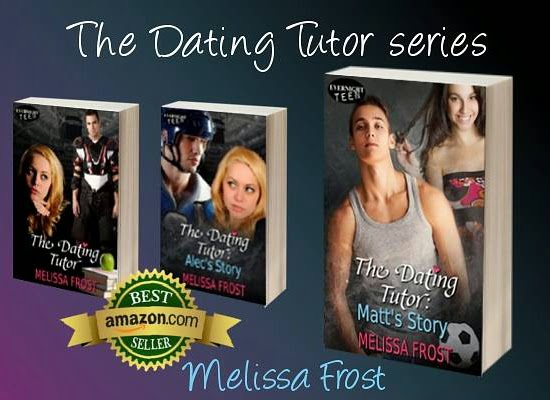 Author Bio:
Melissa Frost grew up loving young adult novels and continues to immerse herself in the current authors on the market. In the fifth grade, she won a writing competition to work with children’s author Colleen O'Shaughnessy Mckenna, and it inspired her to write stories of her own. She never looked back.
Posted by Reviews By Crystal at 11:43 PM