Giveaway:   $30 Amazon Gift Card. Please use the RaffleCopter below to enter.

What is your idea of perfect happiness?
No question, perfect happiness would be if I could see my mom again in real life. For my family to be whole again. Cancer sucks. If I liked science more, I’d go into Cancer research.

What is the trait you most deplore in others?
Closed-mindedness. I live in a town that on the surface seems progressive, but conceals a shadowy historical underbelly of closed minds and even hate.

Where would you most like to live?
*laughs* Well, after what I’ve recently been through… I’d definitely try my hand at Italy.

Which living person do you most admire?
My father. He is my rock. Since Mom’s death, I’ve leaned on him for everything.

Which historical figure do you most identify with?
Leonardo DaVinci. Greatest artist and inventor in history.

Tell me about your best friend. What do you like about this person? What do they like about you?
Jamison is crazy! But that’s why we roll together so tight. I think we bring out the best in one another. We both love art. We both love gaming. We push one another and shoot it straight. No punches held. That’s what makes a great friendship.

What do you most dislike about your appearance?
My ears. Gah! They look like I’m from Rivendell!

What do you consider your greatest achievement?
Oh, hands down, snatching my girlfriend from the jaws of death. Well, she wasn’t my girlfriend at the time, but nevertheless, I stared Death square in the eyes and told him, “Not this time.”

If you had a free day and your only mission was to enjoy yourself, what would you do?
Paint at the beach with my girlfriend.

Caught between the sweltering fall landscape of Wilmington, NC beaches and southern illusions and expectations, all sixteen year-old Cameron Shade thinks about is art. That, and for Farrah Spangled to view him as more than just a friend. Cameron longs to win her heart through art.

After several warm interactions with Farrah, including painting together at the beach, Cameron discovers just how complex Farrah’s life is with her boyfriend and her family. Following a tense run-in with Farrah’s father, she forbids Cameron to ever speak to her again, but Cameron’s convinced there’s more behind the request.

To impress Farrah with a last-ditch effort, Cameron sketches her portrait. But the sketchbook he uses hides a dark secret. Farrah’s now in grave danger because the sketch he drew of her siphons her real-life’s soul into the sketchbook. Cameron now has twenty days to extract Farrah. To save her, he must draw himself into the book.

If he fails… they both die.

~*~*~*~*~*~*~*~
Excerpt:
Jameson catches my arm as we leave class. “Talk to her… or don’t talk. There is no drooling.”
“Wait… What?” I fit my books under my arm. “I may do a lot of things. Drooling is not one of them.”
“Wanna bet?”
I wipe my mouth. “I was totally not drooling.”
“Maybe not, but just like dogs can smell fear… girls can smell desperate.”
“Whatev.”
“The time is now, soldier. I’m giving you ‘til homecoming to score a date.”
“She’s got a boyfriend. You gotta give me more time than that.” Cassisi’s words sweep through my ears. That means you have to fight a little harder, yes? And not with your fists. The pencil is mightier than the fist.
“Pffft, there are other fish in the sea. You know that, right?”
“Were there for Captain Ahab?”
He flashes an incredulous frown and sticks a pick in the top of his hair like Questlove from The Roots. “Uhh, yeah the greatest stalker of all time? Pick a new hero, wouldya? And anyway, that story was about revenge, not love.” He laughs.
“Fine. Bad example.”
“Ya think?” He snorts. His girlfriend, Morgan, saunters up behind him in a tight-fitting Seaview Vikings girls’ lacrosse t-shirt. She waves at me and then slips an arm through Jameson’s. “I gotta run,” Jameson says. We pound fists, and with our hands, we flash the DEVGRU move out hand signal before going our separate ways.
If I could take Journalism for four periods a day, I would. As long as Farrah Spangled were in each class. I scoff at Jameson’s desperate comment. Psssht. Drooling. That’s a completely false interpretation. See, desperate leads to stalker. And I’m nobody’s stalker. Admirer is a far better term. Even if in secret and from afar.
The only class I’m ever extra early for is Journalism. I take that back––sometimes I’m early for Advanced Art, too. But generally, as in every single day, I’m in my Journalism assigned seat with full minutes to spare. This is because Farrah’s entrance into class is red carpet-worthy. I almost want to sit back with a bag of kettle corn and a strawberry Yoo-Hoo. Another whole different side of me wants to grab a camera and blind her with flash snaps. But yeah, that does cross the line into stalker-ville.
As the orange second hand sweeps past the six on the clock with exactly thirty seconds until the bell blares, Farrah strides in like a soft, Sunday afternoon breeze. She tosses her head back at some joke she must’ve heard. Her soft red spirals bounce in the ponytail between her shoulder blades. The rest of the class is unaffected. And yet, tingles sprinkle through me like confectioners sugar over pastries.
Her laughter is musical, if only to me. Well, not only me. I’m sure her boyfriend likes her laugh too. He has nothing on me, though. He can’t shade a sphere using four different techniques. Of course, I can’t sack the opposing quarterback six times in a single football game either. Guess we’re even?
Farrah leans over Mrs. Vandersloot’s desk to get our marching orders for the day. Even the wrinkles on her white button-down shirt are beautifully random. She flips a glance over her shoulder toward the door. For half a second I think it’s going to land on me.
See, Farrah is a third-year journalism wunderkind and school newspaper editor. She basically runs the show. Ol’ Vandy doesn’t even have to lift a finger with the newspaper.
Farrah steps to the front of the room and claps her hands. “Listen up, my little rat-tails… our Homecoming Edition goes to press next Monday, so I’m coming by to check everyone’s projects.” 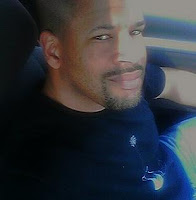 Christopher S. Ledbetter grew up in Durham, NC before moving to Charlottesville, VA in 11th grade. After graduating high school, he attended Hampton University, where he promptly joined the best marching band on the east coast, without having one shred of experience.

He taught high school and coached football for six years in Culpeper, VA. He enjoys the occasional Spartan Race, and is working toward a triathlon.


As a self-described, young reluctant reader, he writes young adult stories specifically to reach other reluctant readers. As a participant in the prestigious Nevada SCBWI Mentor Program, he was blessed to be mentored by Suzanne Morgan Williams, 2012 SCBWI member of the year.


He now lives in Wilmington, NC with his family.