This limited edition box set includes 6 scorching romances that commemorate the 200th anniversary of the June 18, 1815 Battle of Waterloo.

From the Duchess of Richmond’s ball in Brussels to the Battle of Waterloo and beyond, join these six unforgettable heroes as they journey back from the physical and emotional trials of war and discover the passion that thrills the body can also heal the heart. 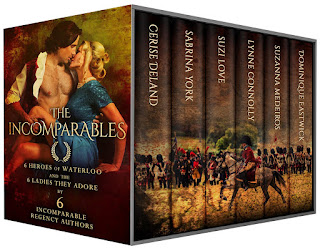 The Stories in the Set:

Interlude with a Baron by Cerise DeLand
Emma wants only an interlude with the man she’s adored for years. But Drayton Worth has spent five years riddled with guilt for hurting her—and he’s determined to have more than a few nights in her bed.

Tarnished Honor by Sabrina York
Daniel Sinclair is a broken man with war wounds that are physical and spiritual. He’s weighed down by grief and guilt and tormented by his tarnished honor. When he meets Fia Lennox, a beautiful and brave Highland lass in dire need of his protection, he sees in her his chance for redemption…or utter damnation. Because despite his valiant attempts to resist her, he cannot.

Love After Waterloo by Suzi Love
When Lady Melton and her son join Captain Belling and the last wounded soldiers evacuating from Waterloo to London, she expects clashes with army deserters but doesn’t anticipate how falling in love with the antagonistic captain will change her life.

Dreaming of Waterloo by Lynne Connolly
Paul “Lucky” Sherstone daren’t even let his wife too close because of his headaches and the living nightmares he can’t dispel. Hetty hardly knows the man who comes back from war, but one thing she does know—she still wants him.

The Captain’s Heart by Suzanna Mederios
A man who is determined to fulfill his duty at the expense of his own happiness, a woman who wants only one taste of true passion, and a case of mistaken identity. Can Captain Edward Hathaway and Grace Kent overcome the guilt that continues to haunt them both and find true love?

For Love or Revenge by Dominique Eastwick
Captain Roarke Wooldridge is about to find out that sometimes love does heal all wounds.But when his need for revenge collides with desires he never believed he would feel again, will he be able to put aside the scars of Waterloo to embrace his future?

Daniel Sinclair is a broken man with wounds that are physical and spiritual. He’s weighed down by grief and guilt that he could not save his friend, Graeme Lennox, and is convinced that a French lance left him less than a man. He has no prospects. Nothing left but his tarnished honor. But then he meets a vexing boy who makes him question even that.

Fia Lennox’s world turned on its end with her brother’s death. She’s gone in one fell swoop from lady to servant…to a woman on the run. The world is a dangerous place for a woman alone—even when she is masquerading as a boy—so when she meets up with a strong, valiant ex-cavalryman, she decides to become his traveling companion. Whether he likes it or not.

Battling villains, would-be-friends and their own finely-forged battlements, Fia and Daniel rush toward their destiny, a scorching passion and, hopefully, redemption. Can love conquer all? Even the ghosts of the past?

Her Royal Hotness, Sabrina York, is the New York Times and USA Today Bestselling author of hot, humorous stories for smart and sexy readers. With over 25 titles her books range from sweet & snarky to scorching romance. Visit her webpage at www.sabrinayork.com to check out her books, excerpts and contests. 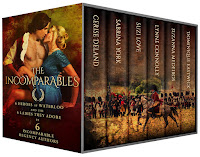 You would think by now it would be impossible for me to be amazed by the talent of Sabrina York. However, every now and then she surpasses even my expectations. This lady can write an awesome story in any time period. Tarnished Honor is part of The Incomparables Boxed Set. If Ms.York's story is any indication this box set is going to be awesome.


Daniel Sinclair was injured in the battle at Waterloo. He suffered a leg injury and also feared his manhood had been injured as well. He also lost a few dear friends and he has a horrible time dealing with their loss and feels like he let them down. How could I not instantly feel a connection to this hero!?!

Fia Lennox lost her only living family in the battle as well. Her brother was one of the solider killed. She is away at a boarding school with no funds to pay. This poor girl goes through so much and is only saved by the good graces of a wonderful friend that helps her hit the road.

Overall this is a typical Sabrina York story that kept me enthralled from page one all the way to the end. This lady has a massive amount of talent and it is always FUN to see what story she is going to come up with next. She has done just as awesome a job with this historical romance that she does with a contemporary.

I have a feeling this whole box set is going to be terrific with all these great authors joined together to tell us about the heroes of Waterloo.

Read more of my reviews on Sabrina York's work here.

Posted by Reviews By Crystal at 10:57 PM