MIDNIGHT SUPPER AT THE RISE AND SHINE by Tara Woolpy ~ GIVEAWAY

MIDNIGHT SUPPER AT THE RISE AND SHINE
by Tara Woolpy

Tara will be awarding a $20 Amazon/BN GC to a randomly drawn commenter. Please use the RaffleCopter below to enter. Remember you may increase your chances of winning by visiting the other tour stops. You may find those locations here.

Bad luck and worse choices—that’s Irene. She’s been a widow half her life and now splits her time between waitressing at the Rise and Shine café and singing in an oldies cover band. And she’s having an affair with a married man—something that even her eclectic, super liberal family can’t condone.

She’d be the first one to admit she has faults, but she’s not a bigot. The genetic pool in her nuclear family spans the globe. And it’s not that she’s prejudiced against people with disabilities but that doctors and wheelchairs give her the heebie-jeebies. So when a cute guy in a chair keeps showing up in the restaurant, she’s clumsy, awkward and strangely drawn. Can Irene let go of the past or is she too emotionally broken to find a future worth the risk?

I pedaled hard against the feeling of the day. After all these years. The morning air pulled up goose bumps on my arms. I pushed harder. A patrol car passed me. A station wagon pulling a fishing boat went the other way, a sleepy father at the wheel. Two sons stared at me from the back seat. As a boy, Adam had loved to fish with his uncle Paul. He would have adored fishing with his father. I squeezed my eyes shut at the memory of Greg in the back of that damned ancient rowboat. He’d found it wrecked and abandoned and had spent the spring of our junior year in high school patching it. Crusty glue had built up on his fingers, and I still remembered the scrape across my skin.

I turned onto the cliff road. As a truck rushed by, a spray of gravel bit my leg. The hill grew steeper. My legs began to ache. My breath came in gasps. Old and out of shape. When we were young, we flew up the hill, arriving at the park sweaty and laughing. Now I was inching along. Alone. I gave up, got off the bike, and walked it to the turnoff, ignoring the rush of wind and dust that whirled around me with each passing car.

This early in the morning the picnic tables were all empty. Beyond the cliff, sunlight colored the lake slate blue. I walked to the cliff edge, dropped my bike, and sat on the dew-wet grass. July 29th. I pulled up a handful of dirt and tossed it, watching the clod break up as it fell. Ashes to ashes, dust to dust. Twenty-four years ago. Soon I would officially have been a widow for half my life. Ten thirty-seven New York time was still a few hours away. I lay back on the grass. A single puffy cloud drifted from the west. For a moment I imagined I could see Greg’s face in the cloud. Except I couldn’t quite remember what he looked like. 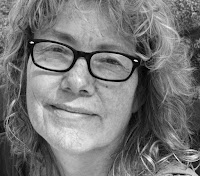 Tara Woolpy is the author of The Lacland series, loosely linked novels set in the fictional upper midwestern town of Lacland, including Releasing Gillian's Wolves, Raising Wild Ginger and Midnight Supper at the Rise and Shine. Tara earned her bachelor’s degree in English Literature from Whitworth College after which she spent a year at the Women Writers Center in Cazenovia, New York. While pursuing her writing career she paid the rent through an astonishing number of jobs—she’s been a waitress, a shop owner, a retail clerk, a half-way house counselor and a commercial diver. Eventually, she took a midlife hiatus from writing to become an aquatic scientist. As such she also holds a Masters degree from Oregon State University and a Ph.D. from the University of Wisconsin-Madison. Now she teaches online for the University of Wisconsin-Green Bay and has come back to writing fiction with new passion and wonder at the long, serpentine beauty of life. In addition to the novels, her work has appeared in Focus, Corymb, Kalliope, Alligator Juniper and the anthology The Things that Divide Us from Seal Press.