GIVEAWAY: One GRAND PRIZE WINNER will receive a $25 Amazon Gift Card & a SIGNED copy of Dear Mr. Weaver! Please use the RaffleCopter below to enter.

DEAR MR. WEAVER by bestselling western romance author, Kit Morgan, is the first in her much anticipated Mail Order Bride Ink Series. Welcome to Nowhere, a town where everyone knows everyone else’s business, and in Daniel Weaver’s case, his business is that he needs a wife. Enter Ebba Knudson, who wonders why everyone in Nowhere looks at her with such curiosity. What does the future hold for Daniel and Ebba? Can they make their unconventional marriage work? Will there be a happily ever after for these two wayward hearts?

Daniel Weaver was ready for a wife. His three older brothers had been married for several years and now it was his turn. So, like his brothers Arlan, Benjamin and Calvin, he sends for a mail-order bride, with a little help from their cousin Matthew of course. After all, he helped his brothers write their letters to their prospective brides, so why not him? But when the letter from his bride comes, it’s got more than her acceptance of his proposal written in it. Worse, it gets picked up and read by the town’s worst gossip, Nellie Davis.

Ebba Knudson can’t figure out why folks in her intended’s town of Nowhere would be giving her such odd looks. It was bad enough she had other things to deal with by coming to the Washington territory to marry a farmer, but now this? Was there something wrong with her future husband? Or just with her? Of which she knew there was plenty. Enough to make her think she might not get married at all…

Enjoy this sweet, historical, western romance and the first book in this laugh out loud new series!

“Do you have a list for me?” he quickly interjected.

“Certainly – why else would I be here?” She reached into her reticule to pull out her list.

Matthew turned and scrambled up a ladder to fetch something from a high shelf. “Just set it on the counter next to Daniel’s. I’ll get to it in a minute.”

“Oh, all right.” She set it down, then glanced at Daniel’s list – and spotted the envelope underneath it. “Has your cousin heard anything from his prospective bride?” she inquired innocently.

“Yes, as a matter of fact he did,” Matthew called down as he rifled through a stack of boxes on the shelf.
“Is that so?” she said as she deftly extracted the letter from beneath the list. She suppressed a rush of excitement by biting her lip. “And has he read it?”

“That’s my cousin’s business. You’ll have to ask him.”

“Of course.” She quickly slid the letter out of its envelope.

“Why, Nellie!” Betsy Quinn called from the hall. “How are you?”

Nellie did what any self-respecting gossip would do – she stuffed the letter into her reticule. “Betsy! How nice to see you..." 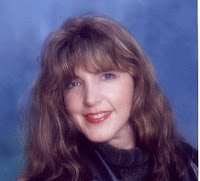 Kit Morgan, aka Geralyn Beauchamp, has been writing for fun all of her life. When writing as Geralyn Beauchamp, her books are epic, adventurous, romantic fantasy at its best. When writing as Kit Morgan they are whimsical, fun, inspirational sweet and clean stories that depict a strong sense of family and community. Kit likes fun and romance, and there’s plenty of both in her books. Kit resides in the beautiful Pacific Northwest in a little log cabin on Clear Creek, from which her fictional town from her Prairie Brides and Prairie Grooms series are named after.

a Rafflecopter giveaway
Posted by Reviews By Crystal at 1:00 AM