Adele Blackthorne is a big girl, a curvy chick. She knows it, and she’s been picked on all her life because of it. But she’s gotten to the stage where she doesn’t care. She may be Rubenesque, but she’s healthy, too. Much healthier than the mean girls at the leisure center that point and stare and say spiteful things about her. Adele rises above it all, and simply enjoys her secretive glances at the center’s hunky lifeguard, Oliver. 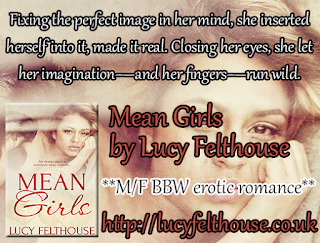 Excerpt:
As usual, Adele Blackthorne felt the weight of gazes on her as she walked from the changing room to the steps to get into the swimming pool. She was used to it by now, and had learned not to react, to just carry on as though she hadn’t noticed people staring and not-so-subtly pointing at her.

With a polite nod to Oliver, the lifeguard, as she passed him, Adele was grateful for his much more favorable reaction. If he thought she resembled a beached whale, he hid it much better than everyone else did. The warmth in his eyes as he nodded back even looked genuine. But she had no illusions, he probably slagged her off the moment he got into the staffroom, or home, talking about the fat woman who went swimming three times a week without fail. But for now, she’d pretend he didn’t. Pretend he thought she was sexy, and wanted to get lost in her abundant curves. God knows she’d like him to.

It was true, she was a big girl and she was most definitely aware of it. Ever since she’d gotten to the age where her excess weight could no longer be called puppy fat, she’d tried to do something about it. Every diet under the sun, ridiculous amounts of exercise… nothing worked. Adele had grown so depressed in her teens that she’d become bulimic. Naturally, she’d lost some weight that way, but she’d also made herself so ill that she’d had to be hospitalized. It had terrified the life out of her, and ever since, she’d resolved that she’d much rather be healthy than skinny.

Which was why she visited her local leisure center three times a week. She used the gym and sauna, and went swimming. And every single time she went, she’d catch someone gawping at her. But because of the years she’d spent—especially at school—being called all the names under the sun, she’d developed an incredibly thick skin. She was happy and healthy—so healthy in fact that she could probably beat all of those skinny bitches at a swimming race. Of course she never offered, never called anyone out on their rudeness and ignorance, but it made her feel better to know that she was fitter and much more polite than them.

Slipping into the fast lane, she settled her goggles carefully into position—she hated getting water in her eyes—then lifted her legs to rest the bottoms of her feet against the end of the pool. Looking at the clock on the wall that counted seconds, she waited until the hand reached the top, then pushed off from the side and launched herself into the lane. It was quiet, so she had this section of the pool to herself. Her arms cut through the water, her legs flapped wildly and she did ten laps without losing any speed. Emerging from the water, she checked the clock again and was pleased to note she’d beaten her previous time.

She was just about to start another ten laps, when she heard voices from the other side of the pool. Voices that clearly forgot how well they carried on water. It was as though they were right next to her.

“God, I’m surprised all the water doesn’t jump out of the pool when she gets in. And the way she swims—she’ll cause a tidal wave one of these days.”

The spiteful words were followed by a trio of sniggers, and Adele gritted her teeth. Part of her wished that she could create a bloody tidal wave, so it would sweep those bitches under water and drown them. The other part of her tsked at the thought. Ideas like that made her just as bad as them, just as unpleasant, just as cowardly.

Because they were cowardly—the way they spoke about her behind her back proved that. If they ever passed her somewhere in the leisure center or its car park, they never said anything, not one word. They’d just scurry away as fast as they could, then titter when they thought she was out of earshot. She hoped that just one time, someone would say something to her face, so she could retaliate, speak up for herself. There was no way she’d start anything—she didn’t want to add confrontational to the list of faults that the mean girls had obviously compiled about her.

Sucking in a deep breath, Adele launched into another ten laps, allowing the chilly water and the exertion of powering through it to burn away her irritation. Because that’s all it was—irritation. She wasn’t angry. Anger was too powerful an emotion, and one that was totally wasted on those ignorant women. She almost felt sorry for them, actually. If they had nothing better to do than to stare at her and slag her off all the time, then they clearly had very dull lives.

The thought cheered her considerably and when she completed her twentieth lap, she lay her forearms on the edge of the pool and hoiked herself up. Her back was pressed against the side, and from here she had a perfect view of the rest of the pool. Tugging her goggles down so they hung around her neck, she had a damn good look at everyone else. The small children and their guardians in the kids’ pool right at the other end of the enormous hall, the old people who swum so slowly as they chatted that she was surprised they stayed afloat, the relentless movement of the man in the medium-speed lane and, of course, the mean girls who were in the same sort of position she was, but at the side of the pool rather than the end. The side which faced the lifeguard station.

Adele narrowed her eyes and watched them—the two waif-like blondes and a brunette—as they chatted and giggled, and it seemed for a change, not about her. They’d clearly changed the subject since their previous spouting of vitriol. Their focus was very firmly on Oliver as he sat on his lofty perch, surveying the pools before him, ready to jump in should anyone get into trouble. She often toyed with the idea of faking a problem, just to get him into the pool and his strong arms around her. However, she knew that although he’d undoubtedly do his duty and help her, he’d never believe such a strong swimmer would need his assistance. Then he’d lose all respect for her, and probably stop hiding his disdain for her so effectively. And the polite nods and smiles she got from him were the only thing—aside from the center’s top-notch facilities—that made the place bearable. She was sure that if the three witches—a nickname she’d secretly come up with for the women—had their way, there would be a sign on the main doors to the building saying ‘No Fat People Allowed.’
*****
About Lucy Felthouse
Lucy Felthouse is the award-winning author of erotic romance novels Stately Pleasures (named in the top 5 of Cliterati.co.uk’s 100 Modern Erotic Classics That You’ve Never Heard Of, and an Amazon bestseller) and Eyes Wide Open (winner of the Love Romances Café’s Best Ménage Book 2015 award, and an Amazon bestseller). Including novels, short stories and novellas, she has over 140 publications to her name. She owns Erotica For All, and is one eighth of The Brit Babes. Find out more about her writing at http://lucyfelthouse.co.uk, or on Twitter and Facebook. You can also subscribe to her monthly newsletter at: http://eepurl.com/gMQb9

Release blitz hosted by Writer Marketing Services.
Posted by Reviews By Crystal at 12:00 AM