Celebrate the re-release of the Noble Passions Series from Sabrina York with a hot sale and a mega giveaway! 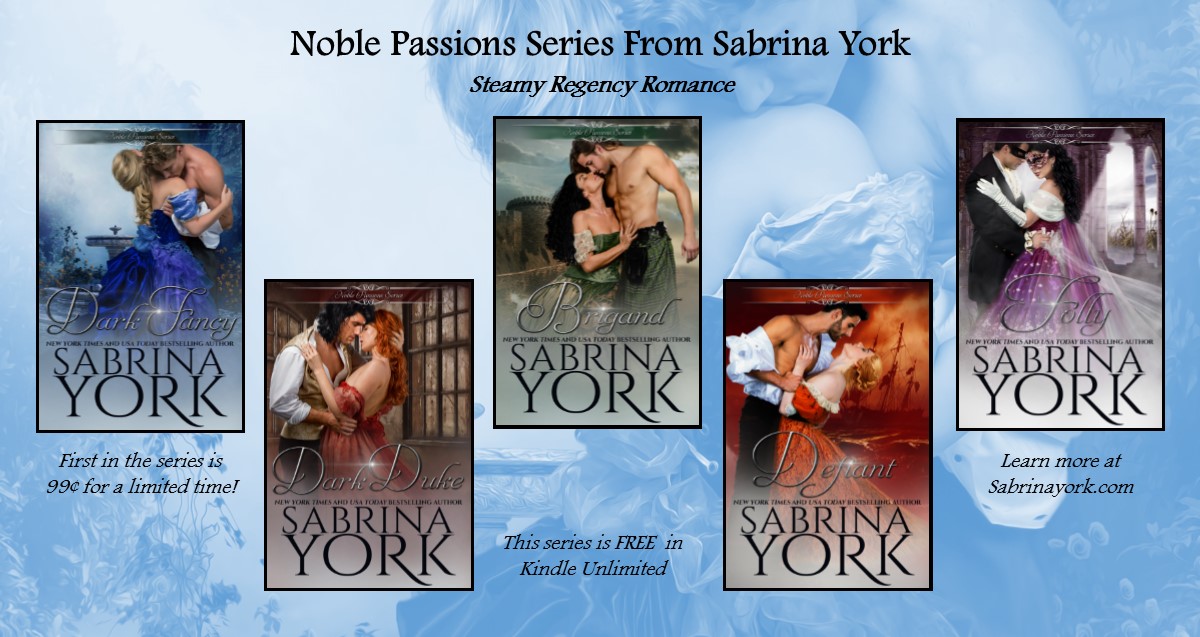 Giveaway: Enter to win one of 5 Tiaras from Sabrina York

Follow the decadent exploits of friends and enemies as they find love and passion in the glittering world of the Regency—and its dark underbelly. All books are stand alone titles. 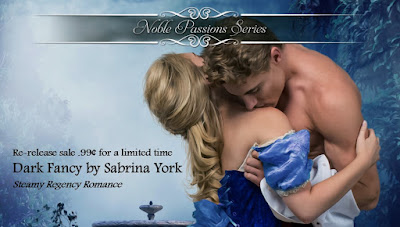 When Lady Helena Simpson flees an unwanted marriage to a revolting lord, she finds refuge with James, a charming, handsome man unlike any she’s ever known. Helena concocts the perfect solution to her problem. She asks—begs—James to ruin her. Surely her betrothed will repudiate her if she is no longer pure. And if all her efforts fail and she still ends up married to a horrid man until the end of her days, she will at least once have known true passion.
But James is not all he seems. He is, in fact, a wicked lord with a dark fancy. When Helena awakens his desire, he becomes determined to take everything she has to offer and more. No matter the cost.
Read an Excerpt

Edward Wyeth, the Dark Duke of Moncrieff’s life has been turned on its end. His well-ordered home has been invaded. By destitute relatives. From Scotland. How on earth can he write Lord Hedon’s salacious novels with hellions battling in the garden and starting fires in the library? But with the onslaught has come a delicious diversion. His cousin’s companion, the surprisingly intriguing Kaitlin MacAllister. He is determined to seduce her. Using her desperate need for funds and her talents as an artist, he convinces her to draw naughty pictures for his naughtier books…and he draws her into his decadent web.
But Kaitlin has a secret. She’s fled Scotland—and a very determined betrothed. When Edward’s cousin is kidnapped and held in her stead, Kaitlin is honor-bound to return to her homeland and rescue her—much to Edward’s chagrin.
Because suddenly he can’t bear the thought of Kaitlin marrying another man. He can’t bear the thought of losing her at all.
Read an Excerpt

Brigand
Book 3 in the Noble Passions Series
By Sabrina York

Kidnapped and held prisoner by menacing Scottish brigand, the notorious McCloud, Violet Wyeth does her best to persevere…and resist his rakish charms. But when she realizes The McCloud is really Ewan St. Andrews, the boy who once saved her life, the boy who once kissed her and made her heart flutter, she is lost.
Ewan has every intention of marrying Lady Kaitlin MacAllister. He desperately needs the entrée into the ton this bride can provide. But when his bride is delivered—bound and gagged—it’s not Kaitlin. It’s Violet Wyeth—the girl who betrayed him and ruined his life when he was a boy. He keeps her, determined to punish her for her sins. But when he discovers the truth about what really happened so long ago, and seething passion rises between them, he can no longer hold on to his rusty grudge. By the time he realizes how much he loves Violet—that he always has—he’s lost her.
All he can do is follow her. Follow her into the bowels of hell—and partake in the torment of the glittering London Season, where the harpies are far more dangerous than a Scottish brigand.
Read an Excerpt

Defiant
Book 4 in the Noble Passions Series
By Sabrina York

When rakish Ned falls in with the wrong crowd, his brother decides to send him to the Continent for “seasoning”. For Sophia, this just won’t do. She’s loved Ned for ages—and also longed for adventure. She runs away from her boring suitors and disguises herself as a cabin boy on the Defiant, the ship sailing Ned to Italy.

Ned knows he’s not good enough for Sophia, but once they’re on the Defiant, he can’t stop himself from touching her, tasting her, loving her. Not when a wild tempest and a band of ruthless pirates threaten them. Not when every look from her gives him such pleasure. And certainly not when she comes, warm and wild and willing, to his bed.

If they survive their voyage, Sophia’s brother might kill him, but it will have been worth every moment and every hot, sweet kiss.
Read an Excerpt

Folly
Book 5 in the Noble Passions Series
By Sabrina York

Widowed and threatened with penury by her heartless in-laws, Eleanor--Lady Ulster--hatches a plot to save herself. Determined to produce the Ulster "heir", she seduces a stranger at a tawdry masquerade. Little does she know, this magnificent masked lover is none other than her husband's greatest nemesis. And God knows Ulster had plenty.
Ethan Pennington is mortified to arrive at a house party and discover Lady Ulster in attendance. He has wanted her and hated wanting her--his enemy's bride--for years. When he overhears Eleanor's predicament and her plans to place a cuckoo in the Ulster nest, he is more than willing to oblige. The opportunity to finally claim her--while taking the revenge he craves--is more than he can resist. Ethan strikes a bargain with Eleanor, promising to provide her with the heir she so desperately needs...if she will meet his needs in return. Every decadent one of them.
Read An Excerpt

About Sabrina York:
Her Royal Hotness, Sabrina York, is the New York Times and USA Today Bestselling author of hot, humorous stories for smart and sexy readers. Her titles range from sweet & snarky to scorching romance.  Visit her webpage at www.sabrinayork.com to check out her books, excerpts and contests. Newsletter: http://eepurl.com/bj8tKb.

Posted by Reviews By Crystal at 12:28 AM