#ReleaseBlitz - The House of Fox by SJ Smith

The House of Fox
by SJ Smith

SJ Smith gives us another glimpse into his warped mind with his latest novel. The House of Fox is a crazy paranormal sex-fest that some will love, others will hate, but everyone will remember.

The House of Fox is a paranormal comedy that contains scenes of a sexually explicit nature.

After a drunken night on the town, four friends awake to find themselves in the House of Fox, the ultimate brothel in the universe, where every sordid fantasy becomes reality. But all is not as it seems. The House of Fox harbours many dark secrets, and factions are plotting against one another.

The four newcomers must choose their friends carefully, and take care not to lose their minds on the thrill ride of perversion that will carry them to the ends of the Earth and beyond.

The Great Voyeur in the Sky is watching . . .

Buy links for The House of Fox: 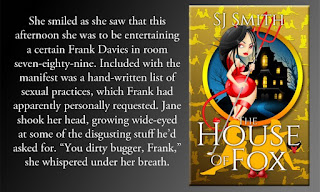 “Um, hello? I’m looking for someone called Pandora?”
“That’d be me,” replied a rasping voice.
“Oh, right. Hi!” He waved, and smiled his most charming smile. “My name is Dylan. Giovanni sent me down here to – um – escape?”
The woman came hobbling into the half-light. She was old – impossibly old – with wrinkles on her wrinkles and snow white hair hanging all the way to the floor. Her eyes, which were radiantly green and untouched by the years that had withered the rest of her body, twinkled with mirth at the expression he must have pulled on seeing her.
“What’s the matter, son? You forget what a real woman looks like?” She leaned her weight on a gnarled walking stick. “I’m ‘fraid to say, the magic that keeps all them girlies looking so damned good out there don’t work none in here. What you see is what you get.”
Was she fishing for compliments? God, women were so hard to understand sometimes. “You look lovely,” he offered, trying to ignore the obvious smell of piss.
“Ha!” Pandora came limping forward, reminding him of one of those crazy old fuckers he sometimes used to encounter in the Post Office. She sniffed the air. “So you’ll be the boy that wants to escape?”
Dylan nodded. “That’s me.” Something about her intense eyes unsettled him and froze him where he stood. He found he was scared of her for reasons he couldn’t quite put his finger on.
“Holy shit. Things must be a damned sight worse than I thought if you’re the best they’ve got to offer.” She shook her head. “Times call for a lion, and I get given a lamb. I can tell from the way you hold yourself you’re more suited to brushing out stables than carrying the hopes of a nation on your shoulders.”
Dylan stuck out his bottom lip. He didn’t like this mean old lady.
“Well, what’s the matter? Cat got your tongue? Sweet Mary Mother of Joseph, let’s hope you ain’t as dumb as you look, because truth be told you look dumber than a bag of hammers.”
Her insults prickled at his skin. “Are you going to help me or not?” he asked indignantly.
“Help you? Well, that depends entirely on your definition of the word.” She cackled, and grinned toothlessly. “I’m going to send you out of here, just like you’ve been wanting. Whether that’ll be of any help to you remains to be seen. It isn’t an easy journey, and frankly you’ll regret undertaking it after you’ve not gone more than a dozen steps. You’ll soon be wishing you were right back here in the House of Fox, getting that big old cock of yours sucked by all them lackey floozies and hoochies.”
Only now did he realise quite how naked he was. Giovanni’s tuxedo had disappeared, as if blown away by a breeze. He covered his groin with his hands.
Pandora laughed. “No need to hide it, son. I’m a little long in the tooth to be getting offended by the sight of a man’s ding-a-ling.”
Frustration throbbed in Dylan’s temples. This whole experience felt like it was shaping up to be a waste of time. If only he’d stayed in bed this morning. “Can we just get on with it, please?”
“If you’re sure you really want to go through with this, we can get started right away.”
“I’m sure.” Dylan puffed out his chest. He wasn’t afraid. Was he?
Pandora nodded sagely. “Cool beans. Get down on your hands and knees. We’re going to work ourselves a little witchcraft.”
He knelt on the floor and got on all fours as instructed. The old woman squatted down beside him, her knees clicking and creaking. She ran her hand along his back, then reached between his thighs and closed her bony fingers around his cock.
Dylan pulled a face. Could it get much worse than this? Getting wanked off by an old lady in a hovel was seriously not cool.
“We’re going to need a little of your seed, so try and relax.” Pandora stroked his shaft with cold, leathery palms. “Come on big boy, squirt me up a handful.”
Dylan closed his eyes and tried to pretend the rather unpleasant motion at his groin was being caused by the mouth and tongue of that lovely blonde girl from last night rather than the warty, withered hands of a geriatric. He finally got hard, felt the flutters in his balls and gasped as he shot his load.
“Bingo,” Pandora muttered. 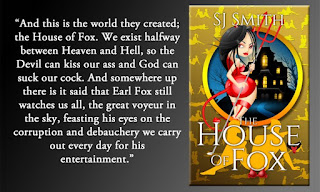 SJ Smith is a neurotic recluse who lives in North Wales. It has long been his dream to become a full time filth monger.

Buy links for The House of Fox: