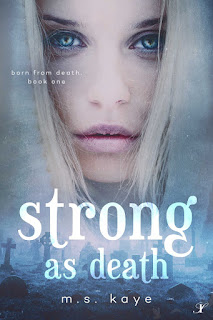 Born from Death book one

Ilona discovers what it means to have a mother who is a modern woman and a father who is a 19th-century gentleman ghost.

After being hit by a car and taken to the hospital, Ilona starts to realize she’s different from other people, and that her mother has hidden the truth from her. She sneaks out of the hospital in order to discover the truth.

A mysterious boy named Archer guides her through Brooklyn and introduces her to Hendrick, the man who claims to be her father—though he died in 1890.

Ilona must discover not only what she must do to rid the city of Soll, a sadistic and powerful spirit, but also what it means to be half ghost. She proves what her mother told her—love is stronger than death.

Amazon | Kobo
Add to your to your to-read on Goodreads.
Release date 7/28/16 from Inkspell Publishing.

Excerpt from Strong as Death:

Another twenty yards and she’d be out of the darkness of the trees and almost to the sidewalk, within reach of the light from the streetlamps.

A figure stepped out from behind a large oak, directly into Ilona’s path.

Ilona stopped and searched for a way around.

“What are you doing?” a rough voice growled.

Ilona recognized it immediately, even before she registered Archer’s face.

“It’s none of your business what I’m doing,” she said.

He moved closer. “You’re making it goddamned impossible to protect you.”

His jaw tightened, and he glared. “What in the hell do you think I’ve been doing?”

“I’m honestly not sure.”

His voice rose. “You’d be lying frozen dead in a gutter right now if it wasn’t for me. You saw what happened in the shelter—you’d have been attacked by now if I hadn’t been around.”

Her tone was quiet, calm. “I know how you scared them away.”

“I told you I have a talent for creating fear. It comes in useful.”

“And I know you’ve been around,” she said.

He raised his eyebrows as if she was being slow.

“Before you asked me if I was lost,” she said. “You were there—when the car hit me.”

She waited for a response.

Finally, he said, “I’ve been around.”

“Will you answer one question? And be honest?”

“I give as much honesty as I can.”

Her lips curved a little. That was perhaps the most honest response he had yet given.

She moved closer, and he backed away.

“When you turned the corner and asked if I was lost,” she said, “you leaned your shoulder on the wall. How did you do that?”

His eyebrows pulled together.

“You’re really good at it,” she said. “It took me awhile to realize you never actually touch anything, that you stay out of the light, that you don’t get cold, your breath doesn’t come out in puffs in the cold like everyone else’s, you never let anyone close, near enough to realize you have no scent, to feel the static when you get too close.”

He took a step back, as if in self-defense.

Awaken from Death
Born From Death book 2
Will be released 10/15/16 from Inkspell Publishing.

The truth of an ancient connection threatens to destroy Ilona and Archer. As they struggle to understand, Lettie discovers, or rather remembers, their history, as well as the punishment Archer bore as a result. She comes to accept Archer will never leave Ilona, but will that cause his destruction?

M.S. Kaye has several published books under her black belt. A transplant from Ohio, she resides with her husband Corey in Jacksonville, Florida, where she tries not to melt in the sun. Find suspense and the unusual at www.BooksByMSK.com.